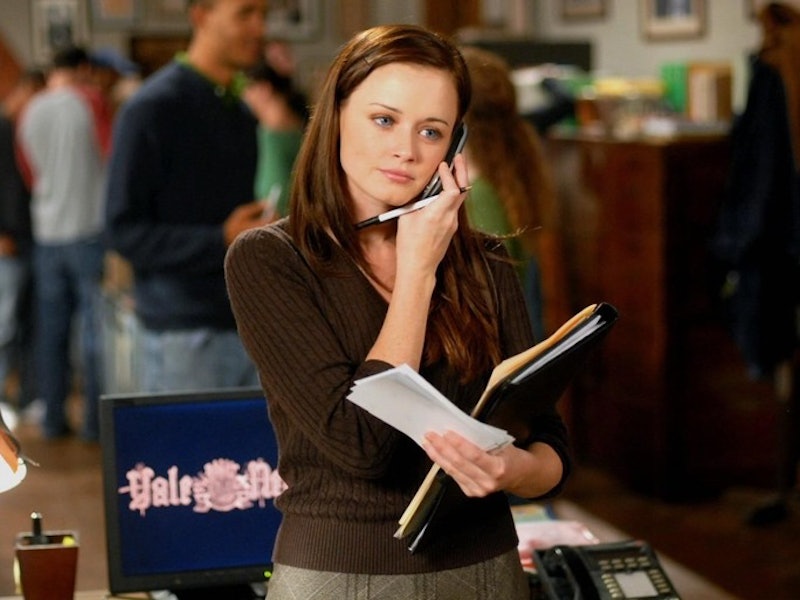 It’s finally time to get really excited, guys, because the first official pictures from the Gilmore Girls revival have been released. While they're all great, I have to say, one in particular has me asking all kind of questions. The photo is a pretty simple one: It features Rory Gilmore in all of her modern-day finest, standing at the head of what looks like a Chilton classroom... looking a lot like a teacher. Wait, what?! Could it be that eternal writer/journalist Rory is now teaching at her old alma mater? Aside from making me want to squeal with delight, the photo also has me wondering what subject Rory would teach if she is, in fact, teaching at Chilton in the Gilmore Girls revival. After all, that girl has a serious résumé of talents and interests, and I’m pretty sure the world after Yale was totally her oyster.

So, let’s address the obvious first: Also in the picture is a chalkboard, one on which is written some pretty telling information. There are no math equations or chemical compounds in sight, even though I’m pretty sure Rory would rock at teaching both of those subjects. Instead, the topic on the board is English, or, more specifically, the oh-so-fitting novel Jane Eyre.

I say fitting because with Rory’s love for all things literary, it makes sense that she would be teaching a subject she is really passionate about. It’s also fitting because the novel has some pretty similar parallels to her own story: a young female being brought into a world of riches and luxury as she develops into a woman both morally and spiritually. Sound like any other character you know?

But aside from me totally geeking out over the literary allusions that Amy Sherman-Palladino might be playing with in the Gilmore Girls revival, I really can’t think of a better English teacher to have than Rory Gilmore. Mix her incredible love of books together with her panache for the written word, and you have yourself one heck of a model for young Chiltonians to look up to.

But course there are other possibilities than the obvious one the photo suggests. It could be that Rory is simply guest speaking at Chilton (still, how cool would that be?). But the photo could also mean that Rory is teaching something a subject other than English. She might just be using the story of Jane Eyre to sort of cross-pollinate the subject she’s teaching in another class.

Whatever Rory really is doing at Chilton, I’m just beyond thrilled to see her back in those hallowed halls.

More like this
What Song Does Eddie Play in 'Stranger Things'? Metallica’s “Master Of Puppets” Ignites The Season 4 Finale
By Alyssa Lapid
'The Summer I Turned Pretty' Book Ending Is An Emotional Rollercoaster
By K.W. Colyard
The Future Of 'All Creatures Great & Small' Is Confirmed & Wedding Bells Are Ringing
By Rebecca Fearn and Frances Stewart
“The Door Is Always Open” For Another 'Breaking Bad' Spin-Off, Says AMC Boss
By El Hunt
Get Even More From Bustle — Sign Up For The Newsletter