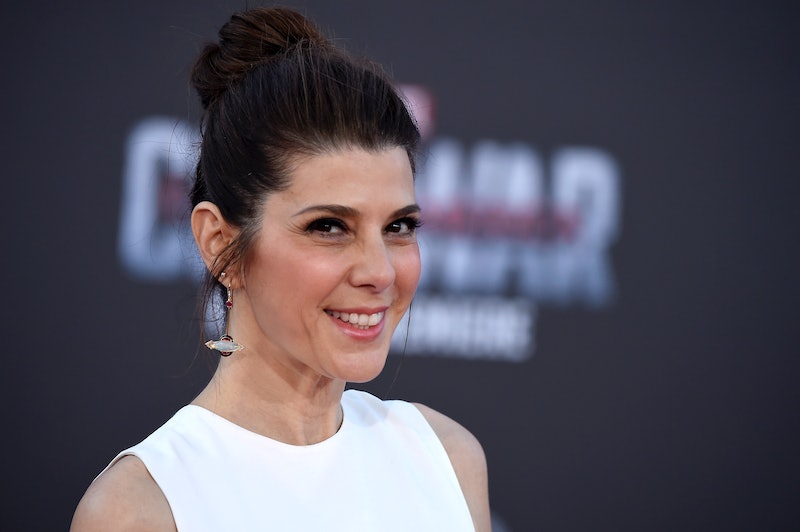 Over a year before he'll return to theaters in his own solo film, Marvel's new Spider-Man made his big-screen debut in Captain America: Civil War. Tony Stark makes a house call to Queens to recruit 15-year-old Peter Parker (Tom Holland) to his side in the Sokovia Accords struggle and to charm Peter's protective Aunt May (Marisa Tomei). Tony gets his flirt on with May, which could be read as a disarming tactic to easier extricate Peter if Tony also hadn't recently broken up with long-time love interest Pepper Potts. Robert Downey Jr. has been confirmed to appear as Tony in 2017's Spider-Man: Homecoming so could his aesthetic interest in Aunt May blossom into something more? A superhero romancing a civilian woman isn't anything revolutionary, unless you consider the usual love interest demographic. Tomei and Downey Jr. are exactly the same age, making an Aunt May/Tony Stark love connection a step in the right direction for gender equality onscreen.

In 2013, Vulture shared a few infuriating graphs reflecting the findings of the site's deep dive into the age gap between male movie leads and their female counterparts. Vulture tracked plotted the ages of the love interests of stars like Denzel Washington, Tom Hanks, and Brad Pitt, noting that as the male actors aged, the female actors they pretended to romance stayed suspended in time. Consider Johnny Depp at 27, opposite a 19-year-old Winona Ryder in Edward Scissorhands, and then at 48, paired with 24-year-old Bella Heathcoate in Dark Shadows. Liam Neeson, meanwhile, has spent the last 10 years primarily acting opposite leading ladies who are at least 14 years his junior at the time of filming. Comparisons like these support the anecdotal evidence of female actors who've publicly spoken about the scarcity of roles for women over 40, like Sally Field or Susan Sarandon.

So it's refreshing to see that Tomei and Downey Jr., both 51, get to play romantic interests — although I admit that at first, I wasn't so thrilled. When I first heard that Tomei would be playing Aunt May, I couldn't help comparing her to Rosemary Harris, who was 74 when she played the guardian of Tobey Maguire's Peter Parker in the 2002 Spider-Man film. Isn't aging down Aunt May a step in the wrong direction? That's all relative, though, and statistics like the ones in the Vulture piece prove that female actors of Tomei's age aren't exactly swimming in offers for fun and meaty roles, either. If Aunt May were inexplicably 25, that would be a different story, but a 51-year-old Aunt May makes for a suitable love interest to Tony.

Don't get me wrong: I'm still hoping that Gwyneth Paltrow (43, for the record) returns to Marvel someday and that Pepper and Tony reunite. But I'm also all for Tony pursuing an age-appropriate Aunt May in Homecoming, or even better: the other way around. Anyway, I'm counting any scenes Downey Jr. and Tomei share in any upcoming Marvel films as an alternate universe sequel to their 1994 romantic comedy, Only You.

When the age gap between the male and female halves of major movie couples is so consistently wide, a relationship between Tony Stark and the MCU's new Aunt May is a strong and long overdue statement.