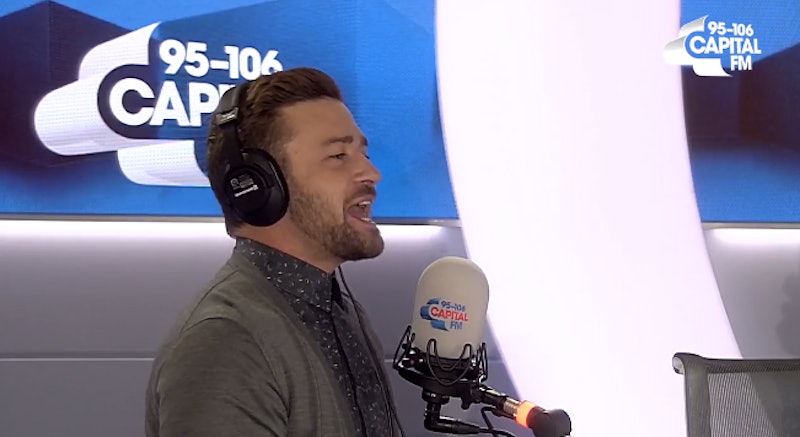 The movie National Treasure stars Nicholas Cage and is about the former frontman of *NSYNC, right? That's the only conclusion I can come to after watching Justin Timberlake reenact the "It's Gonna Be May" meme, because he's so charming that it's insane we haven't already cryogenically frozen him and installed him in a national monument. You think I'm exaggerating, but just wait until you watch the video and have to take an Advil because your cheeks are so sore from smiling too hard. Then you'll see.

I'm sure we all know this, because it's been all over the internet on Apr. 30 for my entire recent memory, but the meme in question is a photo of Justin Timberlake with the overlaid text "IT'S GONNA BE MAY," a nod toward the way Timberlake pronounced "It's gonna be me" in the NSYNC song of the same name from 2000, off the album No Strings Attached. Personally, if the entire world became fixated on the strange way I pronounced a word at the beginning of my career, I'd probably be a little tired of their obsession almost 20 years later. But, proving he's the best-natured dude on the planet, Timberlake is not only not tired of the meme, he actually celebrates it.

This year, Timberlake delighted fans by tweeting about the meme, which would have been more than enough to earn him my undying love and admiration — not that he didn't already have it. But his recent reenacting of the meme during an on-air interview with the London radio station 95.8 Capital FM really put me over the edge. Like, I genuinely don't know how I'm going to be able to come back from here.

During his in-studio interview, the hosts pitch Timberlake a game that's basically replicating the meme. Their first question is, "In what month is Justin Timberlake gonna be on the Capital Breakfast show?," which of course he answers with "It's gonna be MAY." Then, they do the same thing, basically prompting him into rhyming with hay, neigh, and spray, and it is just so delightful. At first, he's a little low-key and mumbly about it, but then he's clearly like "Ah, eff it," and throws himself all the way into it, being THE BEST sport about this joke that's been following him for almost two decades. And not only that, but actually making it fresh again! It's insane.

I mean he's just such a star, I love it so much. With every additional iteration, Timberlake proves that he's the consummate professional, understanding that our fascination comes out of love, and being willing to laugh with an at himself just to make us happy. And honestly? What could be better than that? You can watch the video over at Capital FM.

More like this
Drake’s Surprise Performance With The Backstreet Boys Was Fans’ Fire
By Stephanie Topacio Long
Robbie Williams’ Fortune Has Some Pretty Surprising Origins
By Rachel Mantock
'Friends' Creator Marta Kauffman Opened Up About Misgendering A Guest Character
By Grace Wehniainen
Kimberly J. Brown & Daniel Kountz Looked Back On Their ‘Halloweentown’ Romance
By Stephanie Topacio Long
Get Even More From Bustle — Sign Up For The Newsletter