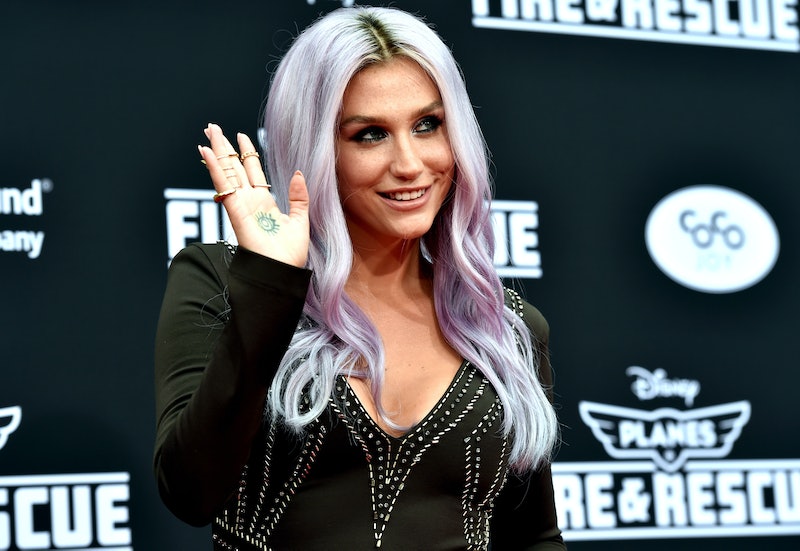 It's finally here. On Friday, as promised, Kesha released the song "True Colors," a track she recorded with Zedd, which marks her first new song in three years. The new song's release comes not long after her ongoing court battle with Dr. Luke, whom she alleged in a lawsuit filed in October 2014 sexually assaulted and emotionally abused her for a decade beginning when she was 18. (Dr. Luke quickly filed a countersuit in October 2014 and denied these claims in February 2016, tweeting, "I didn’t rape Kesha and I have never had sex with her. Kesha and I were friends for many years and she was like my little sister.") Though Kesha hoped through her lawsuit to pursue a music career without Dr. Luke's involvement, in February, Supreme Court Justice Shirley Kornreich ruled in Dr. Luke's favor, stating that upholding the contract was the "commercially reasonable thing" to do in this case. The emotional legal situation and its proximity to the release of this song has, understandably, begged the question whether the lyrics of "True Colors" are about Dr. Luke and her contract battle. Has Kesha finally made a musical statement about this ordeal?

Well, the answer is a complicated. Though Zedd stated in a tweet that Kesha was legally allowed to release this track, the track is not an original Kesha song. Instead, it's an older song that, as Nylon reports, Zedd formerly recorded with Rock Mafia’s Tim James. Though Kesha may be covering one of Zedd's songs, though, it's hard not to think that she picked this track for a reason. The lyrics will certainly resonate with those who have followed Kesha's court battle and her subsequent posts on social media about her ordeal.

Here's a sample of the lyrics heard in Kesha's version of Zedd's song:

Kesha may not have written the lyrics, but they do seem specific. The song even references refusing to apologize, which Kesha stated in the above Instagram post that she would not do even if it meant not getting out of her contract. Even the rainbow reference seems specific to Kesha, whose image is associated with lots of color. It seems that Kesha chose this song with a purpose — it's a clear message that she will stand her ground.

Additionally, though Kesha did not write the track, there is one telling thing about it that also suggests the song might be about her ongoing legal battle: Some of the lyrics have been changed between Zedd's original version and new cover to make the song more personal to Kesha. The original "True Colors" track by Zedd uses the royal "we" in its lyrics, including in lines like, "We’ve escaped our capture/Yet we have our masters" — but in Kesha's version, that's been changed to "I" or "me," so the above line becomes, "I've escaped my capture/ and I have no master." Powerful. Kesha might not be out of her record contract with Dr. Luke, but "True Colors" is very much a song about freedom.

Though it's not clear if more music will follow this release, it's great to have Kesha back, at least in part — and hopefully more tracks will soon follow. For the record, an attorney for Sony speaking to the New York Times revealed that though the company would be unable to terminate her contract with Dr. Luke, they remained committed to supporting her career:

Additionally, in October 2014, Kesha's lawyer released a statement to Billboard when she filed her lawsuit:

Then, on April 3, Dr. Luke's spokesperson released a statement to Rolling Stone.

More like this
Adele’s All-Female Lineup Includes Kacey Musgraves, Mahalia, & Self Esteem
By Shahed Ezaydi
You’ve Been Singing “Teenage Dirtbag” Wrong This Whole Time
By Bustle UK
The Best Memes & Tweets About Beyonce's New 'Renaissance' Album
By Radhika Menon
'The Summer I Turned Pretty' Using “Cruel Summer” Has Twitter Begging Taylor Swift To Release A Music Video
By Radhika Menon
Get Even More From Bustle — Sign Up For The Newsletter