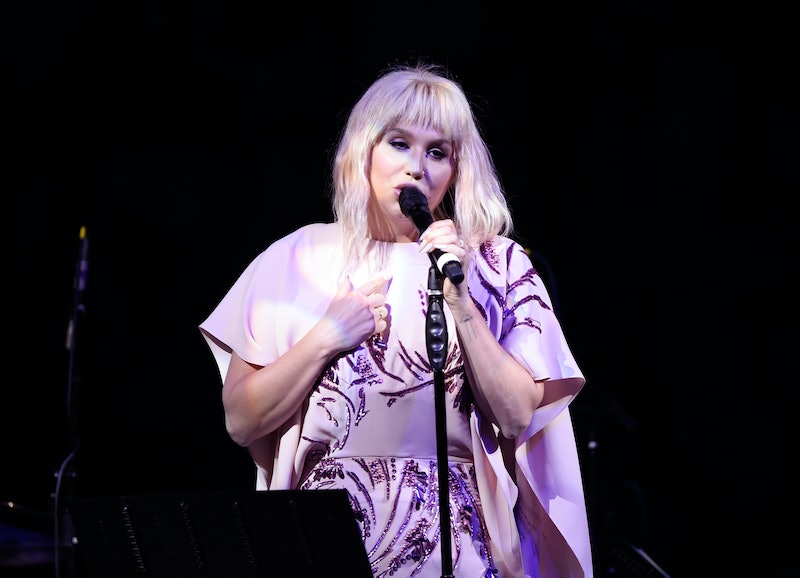 "Til It Happens To You," Lady Gaga's Oscar-nominated tune from the movie The Hunting Ground, is already a heartbreaking song, but a new cover of it makes it more emotional than ever. On Saturday, May 7, Kesha covered Gaga's "Til It Happens To You" at the Humane Society Gala, and the singer's performance was absolutely beautiful. When she sang the track, about abuse and survival, with the honoree of the evening and co-writer of the song, Diane Warren, accompanying her on piano, it's hard to imagine there was a dry eye in the house.

Before Kesha even began her performance, the singer gave a poignant dedication, saying, "I want to dedicate this song to every man, woman, child [and] animal that has ever been abused.” And as she sang, images of caged animals graced the screen behind her, making the already powerful song even stronger. It's great to see Kesha delivering such a heartfelt performance, especially of this song; "Til It Happens To You" has been used as an anthem for sexual assault survivors, and Kesha, as many know, has alleged that Lucasz Gottwald (aka Dr. Luke) caused her years of sexual and emotional abuse. (Kesha has sued Dr. Luke over the allegations, while he has repeatedly denied her claims and has launched a countersuit.)

It's also just great to see Kesha — who, due to a recording contract with Sony she's currently fighting in court, has released just one song, Zedd's "True Colors," in three years — performing again. It's especially nice to see that it's a song by Gaga, who has proven to be a supportive friend of Kesha throughout this difficult time. When news broke that Kesha was struggling to get out of her recording contract, Gaga sent the singer love through social media, and at the Academy Awards, she dedicated her version of "Til It Happens To You" to Kesha. It's wonderful that Kesha has the love, support, and friendship of Gaga, as well as so many other fans and celebs.

There hasn't been a version I've seen of "Til It Happens To You" that hasn't been heartbreaking. At the 2016 Academy Awards, Gaga performed the song as a huge group of sexual assault survivors dressed in white stood behind her in solidarity, holding hands. It was enormously emotional, and Kesha's cover of the song is equally heartbreaking. Her powerful performance rightfully earned her a standing ovation at the Gala, and the respect of so many fans at home.

On April 3, a spokesperson for Dr. Luke's released a statement to Rolling Stone that said,

And in October 2014, Kesha's lawyer released a statement to Billboard about the filing of her lawsuit:

In February, an attorney for Sony told the New York Times: