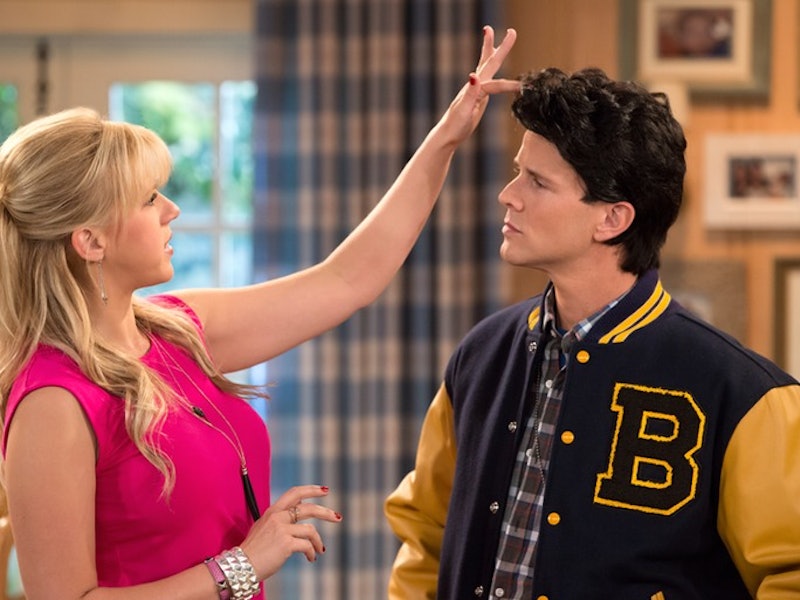 It seems that as we speak, filming for Fuller House Season 2 is underway. With the cast back on set, fans now have photo confirmation that D.J.'s high school sweetheart, Steve, will return to Fuller House when the second season premieres on Netflix. Actor Scott Weinger shared a behind the scenes Season 2 photo on his Instagram that is sure to make Full House fans simultaneously feel nostalgic for the original series and excited for the spinoff's return. In Season 1, Steve straddled the line between adorably lovesick and totally creepy as he pursued D.J. after the death of her firefighter husband. Hopefully, he will tone down his romantic moves and get back to being the food-loving sweetheart he once was.

In the photo, Weinger is sprawled across the Fuller family's couch in the living room, in a move that is reminiscent of the Steve fans once knew and loved. Could this be a return to old school Steve? Don't get too excited just yet. The few details that have surfaced about Steve's Fuller House Season 2 arc point to more romantic shenanigans. From a new love interest to continuing his rivalry with Matt, Steve still seems to be focused on convincing D.J. that he is the right guy for her.

Whether or not he ends up succeeding, at least fans will get to see more of Weinger, the man who was once (the voice of) Aladdin, and his new take on Steve. Check out the photo of Weinger chilling on the family's couch below and just try not to feel those Full House feels creeping up on you.

After all this time, Steve is still the cutest, but the big question is will he find his way back to high school Steve or will he continue to aggressively pursue D.J. using bad wigs and memories? Here is everything there is to know about Steve's role in Fuller House Season 2 so far.

He Will Start Dating A D.J. Clone

The good news is Steve is moving on from D.J. and dating someone new in Season 2. The bad news is this person is virtually identical to D.J., and her name is — I kid you not — C.J., as reported by TVLine. As for D.J.'s feelings about C.J., it sounds like she is not going to be fan and might even be a bit jealous of D.J. 2.0., which suggests she still has some feelings for Steve.

The Matt/Steve Rivalry Is Still A Thing

While both Matt and Steve will be dating other women, the romance drama is far from over. As this cheeky photo of Weinger and John Brotherton (Matt) illustrates, these guys are still trying to be number one in D.J.'s heart, even though she told them she needed time to figure herself out as a single mom.

The Love Triangle Is Far From Over

In an interview with E! Online, Candace Cameron Bure revealed seeing Matt and Steve dating new women might lead to more love drama, not less. "I'm not sure — If Steve and Matt both have girlfriends, it might change her feelings," Bure explained. "You know how once something's unavailable that you think is and you're like, ‘Hmm, maybe I missed out on something, maybe I should rethink this.' I think that's going to be one of the big storylines."

In other words, Steve might find himself in a love polygon if both of the guys, the new women, and D.J. cannot sort out their feelings. If the thought of tracking the guy's independent romances and D.J.'s renewed interest in them is giving you a headache, just focus on all the shenanigans that this messy love triangle is sure to bring.

Fans of Steve can rest easy because it is clear he is going to be a major presence in Fuller House Season 2. Just don't expect him to live happily ever after with D.J. anytime soon because there are plenty of twists still to come.