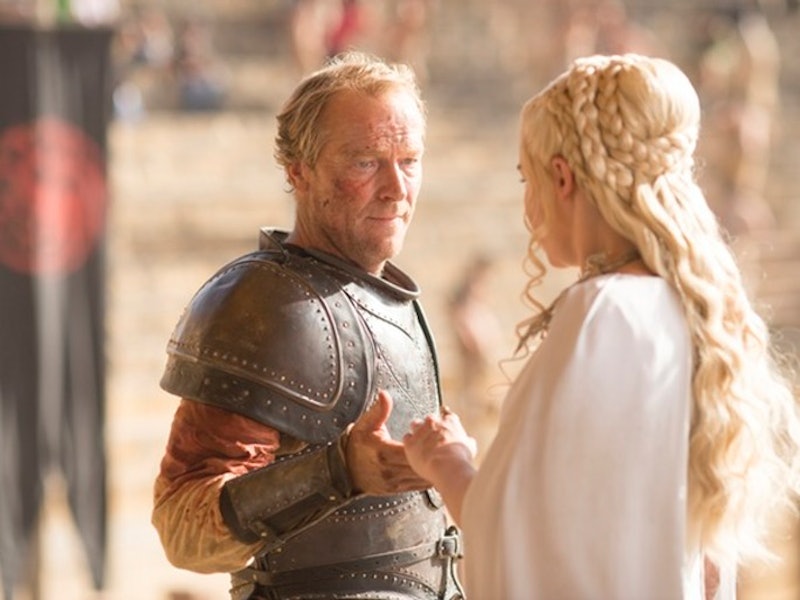 From the very first episode of Game of Thrones, Ser Jorah Mormont has been one of the rare characters who truly had a noble soul. Sure, he flirted with betraying Daenerys early on in hopes of being allowed to go home, but he soon became her most loyal servant and trusted friend. Unfortunately, all of these things have only made it very likely that Ser Jorah will die in Game of Thrones Season 6.

Ever since Jorah contracted the deadly greyscale, his days have been numbered. At this point, it does not seem to be a question of if he will die, but rather when, and if the trailer for Episode 4 of Season 6 "Book of the Stranger" is to be trusted, then Jorah could be exiting the story much sooner than anyone thought. With Jorah and Daario continuing their quest to rescue Dany from the Dothraki, Vanity Fair pointed out that the guys are set to engage in a fight inside of Vaes Dothrak (the place where Khaleesies go to live out their days once their Khals die). The trailer, below, even features a snippet of the scene, and it does appear to be a brutal tussle between Jorah, Daario, and the Dothraki. Will Jorah sacrifice himself so Daario can reach Dany? If he does, that means Jorah will die without ever seeing his beloved Khaleesi again.

I must admit, I am skeptical that Jorah will die so early in the season. Since Jorah and Daario make it all the way to Vaes Dothrak in the next episode, Game of Thrones is either hitting the fast forward button on Dany's storyline or both men are doomed to fail. This creates a situation where one of three things has to happen: both men die in the rescue attempt leaving Dany truly on her own to get out of this situation, one of the men dies forcing the other to retreat, or they successfully reach Dany and she goes with them — or chooses to stay. It seems like Dany has more to learn from her fellow Khaleesies before she can leave Vaes Dothrak. That makes me think the men won't succeed on their first attempt or they will see Dany, but she will have been convinced to stay with the women by that point.

Whether the guys make it to Dany or not, neither one of them is safe. Game of Thrones is dispatching extraneous characters swiftly in Season 6. With Dany in Vaes Dothrak, a place where she could learn valuable information about what it takes to rule, she may not need the cavalry to save her at all. If that is the case, then Jorah and Daario's purpose in the story could reach its natural conclusion.

Still, having Jorah die trying to save Dany would feel like a cheat unless the two get to say some sort of goodbye. Jorah has been far more important to Dany's story than Daario has, and his death would hit harder. He is not a Roose Bolton or a Balon Greyjoy. If Jorah's death happens in the middle of a battle without any payoff to the years he has spent by Dany's side, that would be majorly disappointing.

Game of Thrones has devoted a great deal of time to developing the relationship between Jorah and Dany. His love for her may be unrequited in the romantic sense, but Jorah is Dany's oldest friend. He has been with her since the beginning. His death needs to have a meaningful impact on her story. If he dies before he reaches her — and Dany doesn't know about his sacrifice — that would be a huge waste.

Thanks to the greyscale leaving Jorah with a sense that he has nothing left to lose and the general nature of Game of Thrones, it is almost certain Jorah will die, and soon, but I hope his death is not one without purpose. If "Book of the Stranger" is his last episode, then Ser Jorah and Dany deserve a goodbye that will leave fans appropriately wrecked. If the noble knight is not going to make it back home to Westeros by his queen's side, at the very least he should die for her, as he always swore he would.