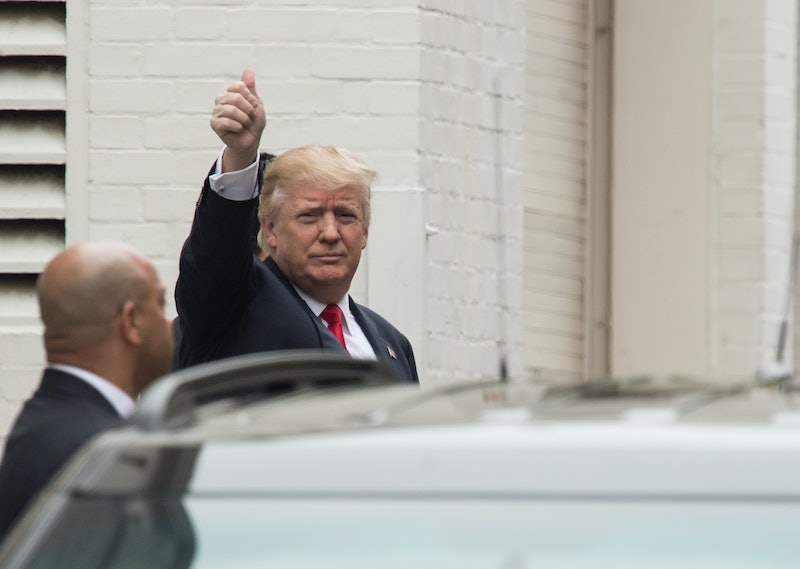 Once Ted Cruz and John Kasich promptly dropped out after Donald Trump swept Indiana's primary, the presumptive GOP nominee began to plan for his general election campaign. Naturally, that process involves contemplating which potential running mate could help him relate to a wider population of voters. According to the Associated Press, the GOP candidate has narrowed his list to just five or six candidates. Since he will most likely be running against Hillary Clinton, Trump might choose a woman vice president to help reverse the negative publicity he's received over his comments towards women.

In an interview on Fox News' The Record, Trump hinted that two women are already included in the short list: former Arizona Gov. Jan Brewer and Oklahoma Gov. Mary Fallin. He also disclosed that he's not interested in running alongside another business person. Instead, he said, he wants to select someone who will help him pass legislation. In other words, there's a good chance that Trump will choose a politician who has ample experience in elected office. Certain Republicans, such as Wyoming Rep. Cynthia Lummis, believe that politician must be a woman if Trump wants to defeat Clinton and the Democrats. The Representative spoke up during Capitol Hilll event at the end of April:

I would suggest a woman, because some of the remarks he has made about women are not going to help him appeal to some of the 53 percent of the voting populace that are women ... He has succeeded on the strength of his personality, so having a regional balance, as frequently happens, is not as important as perhaps having a personality balance.

There are some female politicians, however, who might throw that desired balance even further off-center or strengthen Trump's case against women, which doesn't bode well for him.

A Trump-Palin campaign is simply too much too handle. Both individuals have strong personalities and have become known for making uninformed and insensitive statements. The Washington Post's Dana Milbank went as far as to call Palin the "Mother of Trump" considering her past comments regarding the war in Syria and waterboarding, among other slurs. The pair would likely alienate most of America.

Trump specifically said he does not want another business person on his ticket. As former executive of Hewlett-Packard, Fiorina, like Trump, has no political experience. Though political experience isn't a necessity in some cases, a greater lack of it might concern Republican voters who identify more strongly with the establishment.

If Trump wants to rebuild a reputation among women, she's not going to help. Her alleged "humor," like some of his speeches, are simply unprofessional and inappropriate. In an interview with George Gurley, she revealed her intolerant, close-minded attitude towards both Democrats and women, saying:

If we took away women's right to vote, we'd never have to worry about another Democrat president. It's kind of a pipe dream, it's a personal fantasy of mine, but I don't think it's going to happen. And it is a good way of making the point that women are voting so stupidly, at least single women.

The same goes for Minnesota Rep. Michele Bachmann, who voted against creating a bipartisan commission that would have planned to put a women's history museum in the National Mall because she said it would "enshrine the radical feminist movement."

Senator of Iowa Joni Ernst's ultra-conservatism would be overwhelming paired with that of Trump. The senator opposes a federal minimum wage, has suggested Obama is a "dictator," and has supported the state nullification of federal laws.

The Nevada Assemblywoman made some concerning statements towards refugees on her weekly radio show on Las Vegas' KWDN:

I am not OK with Syrian refugees. I’m not OK with terrorists. I’m OK with putting them down, blacking them out, just put a piece of brass in their ocular cavity and end their miserable life. I'm good with that.

She's also pretty extreme when it comes to enjoying guns — and allowing her children to use them.