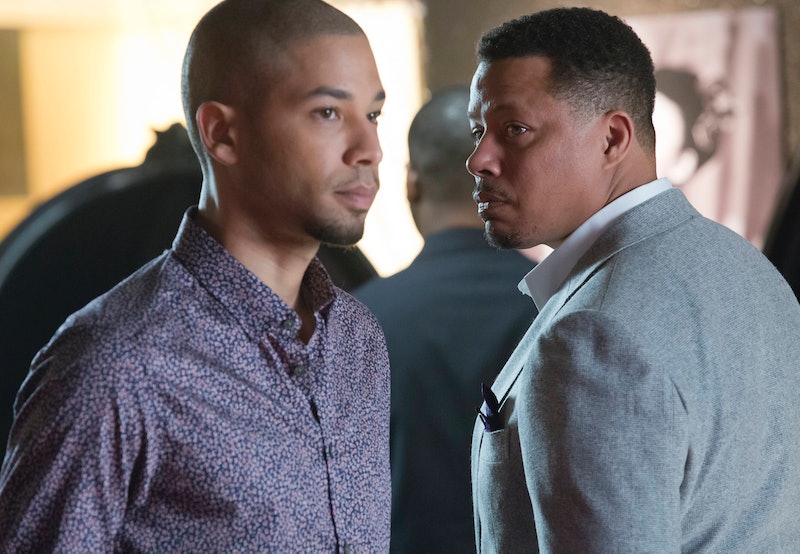 If there’s one character on Empire that’s been put through the ringer, it’s Jamal Lyon. When we met him at the start of Season 1, he was living with his boyfriend, Michael, and singing in clubs about how his father didn’t love him. Suddenly, Cookie came back from jail and boom: Jamal’s climbing the ladder of stardom — but his father still doesn’t love him. Jamal has time and time again been rejected by Lucious, sometimes outright, sometimes subtly, and he still keeps going back for more. It all culminated in Jamal getting shot on Empire this week, after jumping in front of Lucious in an attempt to stop Freda Gatz from shooting him. Now that his own life of jeopardy, we need to question why Jamal feels such an allegiance to a father that has really never loved him.

At first, Lucious refused to accept Jamal because he was gay. There is a flashback in the first season in which a young Jamal (we’re talking four or five years old here) puts on his mother’s high-heeled shoes. When Lucious sees that his young son is trying to walk in heels, he picks Jamal up, walks outside, and literally puts him in the garbage can. That’s some heavy stuff right there, and not something that a person just gets over. Throughout the first season, we saw both Lucious and Jamal flashback to that moment repeatedly, showing that neither has forgotten it and suggesting that it changed their relationship forever.

Eventually, Cookie brokered some sort of weird truce. On Empire, there have been a lot of plot machinations involved, with labels and songs and producers and flip-flopping between all of the members of the Lyon clan. But eventually, it seemed like even though Lucious had at least temporarily pushed aside his hatred for Jamal’s “lifestyle,” as he calls it, Lucious still hated his son, for one simple reason: Jamal is way more musically talented that Lucious. Even if Lucious could one day totally accept Jamal's sexual orientation, he will never be able to handle the fact that his own is more talented than him.

Lucious couldn’t stand being nominated against his son for the ASAs, and he couldn’t stand seeing his son’s music rise above his. In “Rise By Sin,” Lucious tells Jamal that when “[Jamal] dies of AIDS, I’ll celebrate,” which is both horrifically offensive and cruel.

Despite Lucious’ constant attacks on his son, Jamal keeps coming back for more. Call it naïveté or just loyalty, but Jamal’s consistent support of his father and Empire Enterprises has put not just his career, but also his life at risk. Jamal has missed on many an opportunity due to his father’s jealousy, and instead of distancing himself from the family, he let Lucious stifle him. Both Lucious and Jamal lost out on “Song Of The Year” at the ASA Awards in “Rise By Sin” because they split the vote. If Jamal had simply campaigned on his own instead of with his family, he probably would have won for his song.

Now, we find Jamal fighting for his life, and all because of Lucious. The bullet that Freda fired was meant for Lucious, but Jamal stepped in front of him, to offer himself up as a sacrifice for Lucious. Why? Lucious has caused Jamal nothing but pain and strife. Sure, he made Jamal CEO for like 15 minutes, but Lucious does nothing nice for Jamal unless it’s for his own good. Jamal turned against the family... but not really. He was back in two episodes. Jamal’s inability to distance himself from not only his father but also Empire Enterprises has cost him musically, and now, it may even cost him his life. Hopefully, this near-death experience will help Jamal see that Lucious doesn't deserve anything from him.