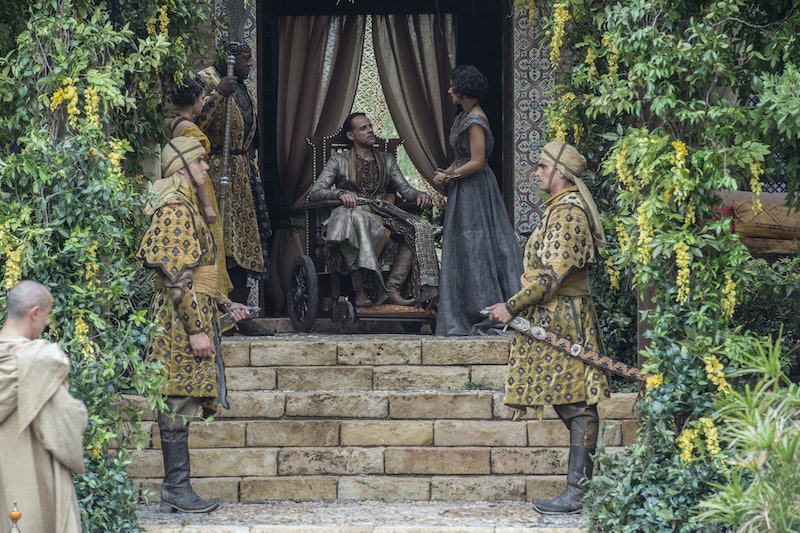 Although the book itself has yet to be published (or even secure a firm release date), George R.R. Martin has whetted his readers' appetites by releasing sample chapters from The Winds Of Winter , the sixth book in his A Song Of Ice And Fire series. The author's selection of which chapters to release has been interesting, as they seem deliberately chosen to comment on events on HBO's Game Of Thrones — specifically, how much the show is diverging from its source material. Most recently, that means a chapter devoted to Arianne Martell, the daughter of Prince Doran of Dorne… and a character that doesn't exist on the show at all. So why was Arianne cut from Game Of Thrones ?

Other than this latest Arianne chapter, Martin has also released excerpts featuring Sansa (still safely masquerading as Alayne in the Vale rather than wed to psychotic Ramsay Bolton), Tyrion Lannister (still on the road to Meereen rather than ruling it), Ser Barristan (still alive rather than killed in battle), among others. The newly-released Arianne chapter is actually the second devoted to the Dornish princess, both of which were supposedly cut from A Dance With Dragons and moved to the sixth book instead, according to Martin's own blog.

These two chapters center around the execution of Prince Doran's plan to unite with the Targaryens against the Lannisters. He has sent his son Quentyn (also cut from the show) to find and wed Daenerys. Meanwhile, Doran receives word that someone named Jon Connington — the best friend of Rhaegar Targaryen and former Hand of the King, long presumed dead — has returned to Westeros with a mighty army of sellswords and a boy he claims to be Aegon Targaryen, the son of Rhaegar and Elia Martell who was supposedly murdered by The Mountain during the sack of King's Landing. Whether this boy really is the Targaryen prince is an issue of much contention; so while he waits for news of Quentyn's mission in Essos, Doran dispatches Arianne to meet Jon Connington and surmise the truth of his claims.

To say this plot is a departure from the HBO series would be a huge understatement. It involves four characters that were completely cut from the show (Arianne, Quentyn, Jon Connington, Aegon) and another that was just senselessly murdered by Ellaria Sand (Prince Doran). There has been no hint of an alliance between the Martells and the Targaryens on Game Of Thrones, and also no hint of where things in the southernmost kingdom might be headed now that the entire royal family has been murdered by a paramour and her bastard daughters. (For a full breakdown of how the two Dorne storylines differ, read this.)

Why so many drastic changes? And why did showrunners David Benioff & D.B. Weiss cut one of Martin's most feminist characters? (Readers were outraged when they learned Arianne had been cut, to say the least.) In any adaptation, there are always things lost in translation — just ask any Harry Potter fans still fuming over the exclusion of Peeves the poltergeist. But what was originally supposed to be a change for expedience's sake may have turned out to be a rather large spoiler for book readers.

One of the things that Martin did so well in his series was to take a world that seemed manageable and somewhat self-contained in the first books and explode it out from there in unexpected ways. In retrospect, A Game Of Thrones is relatively intimate, focused almost entirely as it is on the Starks; the only point-of-views readers received from outside the Northern family were Tyrion Lannister and Daenerys Targaryen. Subsequent books expanded the world, scattering the Starks across the continent and introducing several new point-of-views, including Theon Greyjoy, Davos Seaworth, Jaime Lannister, and Samwell Tarly.

After the third book, many readers assumed that Martin would reverse this expansion and begin collapsing his world as the story entered its latter half, bringing characters together and colliding storylines in exciting new ways. But the expansion just continued throughout A Feast For Crows and A Dance With Dragons, introducing countless new POVs, from Arianne and the rest of Dorne to Asha and Victarion Greyjoy in the Iron Islands, from Barristan Selmy in Meereen to Melisandre at the Wall. With only two books left in the series — The Winds Of Winter and A Dream Of Spring — things aren't exactly showing signs of coalescing anytime soon: Tyrion spent the entirety of A Dance With Dragons traveling to meet Dany in Meereen… and after 1,000+ pages, he still hadn't reached his destination.

This impulse for relentless expansion is one that Benioff & Weiss resisted. Season 5 marked a noted shift for the show, starting to collapse storylines in ways that Martin hadn't (Tyrion and Dany met in the season's seventh episode), and cutting others out entirely. Dorne appears to have been one of those casualties. If the showrunners' goal was to start collapsing their fictional world as the series entered its final few seasons, then it makes sense to shy away from introducing too many new characters — especially if their plots aren't 100 percent crucial to the story's endgame.

And that's where the bad news comes in. By combining the characters of Ellaria Sand and Arianne Martell, never introducing Quentyn, murdering Prince Doran, and eliminating the Jon Connington/Aegon Targaryen subplot, Benioff & Weiss are undoubtedly saving precious storytelling time… but also potentially spoiling the fact that these subplots are ultimately unimportant in the grand scheme of the books. Surely if Aegon Targaryen's invasion of Westeros and his alliance with Dorne was of key importance to the conclusion of this saga, Martin would have made sure that it was included on the show, wouldn't you think?

As undoubtedly frustrating as it was to lose Arianne Martell, the answer to the question of why her character was cut is probably disappointingly banal: she's simply not important enough in the grand scheme of things to warrant an introduction at this late stage. And while that may be something of a spoiler for book readers, it's probably a good thing for more casual fans of the show: one less face and name to keep track of in the already-daunting world of Game Of Thrones.

More like this
'The Sandman’s Ending Is A Departure From Neil Gaiman’s Comic Book Series
By Kadin Burnett
'The Simpsons' Will *Finally* Address How They “Predict The Future”
By Sam Ramsden
The 'PLL: Original Sin' Creators Say A’s Identity Will Be “Very Clear” By The Season Finale
By Alyssa Lapid
The Bestselling Novel 'The Doll Factory' Will Be Adapted Into Thrilling TV Series
By Catharina Cheung
Get Even More From Bustle — Sign Up For The Newsletter