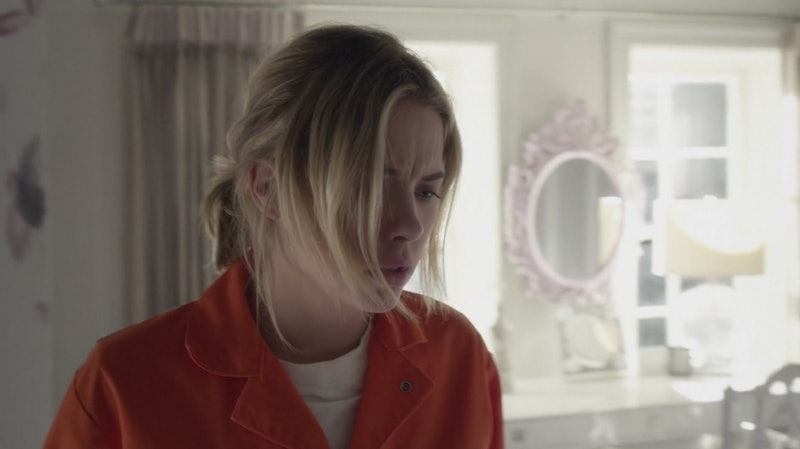 The Season 6 finale of Pretty Little Liars easily ranks as one of the most shocking finales in PLL history — mostly because it put one of the Liars very own in immediate danger. Uber A thwarted the Liars' plan to finally catch the Big Bad in action in the craziest way possible — by kidnapping Hanna right under the group's nose. The last time viewers saw Hanna, she was being dragged across the floor in the bell tower, seemingly unconscious. We don't know what Uber A's ultimate plan is for Hanna, but the crazy new trailer for Season 7 of Pretty Little Liars certainly suggests that something terrifying is happening to Han. Could Hanna be back in the dollhouse in Season 7? It's a frightening, but very real possibility.

The new trailer doesn't show us much of Hanna, but the flashes that it does show should make any PLL fan totally freaked out. In the trailer, we see someone who appears to be Hanna running away through a dark hallway, which, at first glance, could be the bell tower we saw Hanna being dragged through. In another scene, however, we see that a frightened Hanna is being sprayed with water — something that wouldn't make a lot of sense to be happening in the bell tower. Where might this kind of thing go down? None other than Charlotte's nightmarish dollhouse, of course.

Originally fans assumed that whoever was dragging Hanna through the bell tower had full intention of throwing her off of it, just like Charlotte was. But what if things aren't quite so simple? Perhaps the person who kidnapped Hanna had full intention of killing her, but decided that they wanted to make sure that she suffered properly before her ultimate demise. After all, bringing her back to the dollhouse, the place where she and her friends were tortured for weeks, would be the ultimate revenge for Charlotte's murder. Not only would it cause Hanna pain, but it would also pay a creepy homage to the torture that Charlotte so carefully crafted for the girls.

If Hanna really is in the dollhouse, it could mean that Uber A is far more connected to Big A than we originally thought. Perhaps Uber A has been hiding in plain sight this entire time — he or she could have even helped Charlotte build the dollhouse in the first place. Maybe Charlotte's only partner wasn't Sara Harvey, but someone even smarter and more ruthless than Big A herself. When Charlotte died, Uber A could have officially picked up the torch.

Only time will tell where Uber A is taking Hanna... but here's hoping that she gets back to Rosewood safe and sound soon!