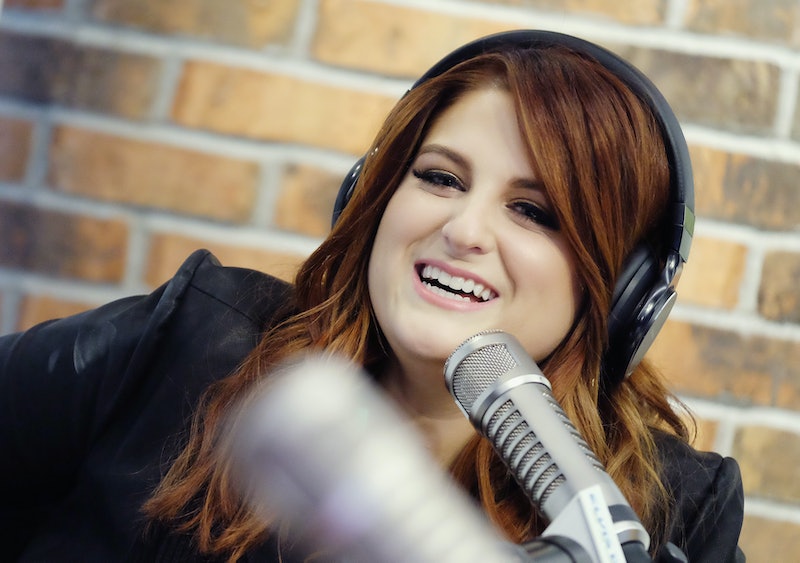 "All About That Bass" singer Meghan Trainor defied superstitious record executives everywhere by dropping her new album Thank You on Friday 13. That's right. She just went right ahead and made the unluckiest day in the year the luckiest for Trainor fans: Thank You is a treasure trove of feel good tunes. But what's the stand out track? A track that tells ladies everywhere to do their thing and reinforce boundaries? Let me give you a few clues.

First clue: you've probably already listened to it, since it was one of the singles released before the album debuted. Second clue: it's a feminist pop classic that's as right-on as it is catchy. Third clue: it's all about self-sufficiency. Fourth and final clue: it marked the highest debut on the Radio Songs chart since the release of Lady Gaga's "Born This Way" five years earlier. Any guesses yet?

If you're thinking "No," then you're right on the money: the lead single from Thank You is the perfect tune to play to that friend of yours who's way too nice to creepy dudes at clubs and stands there nervously when another dance floor lothario tries to pay for a round of shots and get her number. Or for you, if you're that friend.

"No" is written in the grand tradition of songs about self-reliance that are unbelievably catchy. "Respect," "I Will Survive," and "Independent Women" are all the pop foremothers of "No." "No" doesn't just provide food for thought; it worms its way into your audio canal and stays put for weeks. You'll be singing "Nah to the ah to the no, no, no/My name is no/My sign is no/My number is no" to yourself in the shower for weeks. And that's crucial. In a world where women are taught to say yes first and put themselves last, it's positive reinforcement to have these lyrics on loop in your brain.

The lyrics themselves are fire. The scenario's pretty clear. A guy is bugging the singer. He's all over her, asking for her number, feeding her tired chat up lines and thinking she'll eat them up. He's even touching her minus her permission (yuck). And the singer is confidently but not aggressively rebutting his advances. The word "no" is used 74 times throughout the song. This is important: sometimes, when you've said no a few times over, you feel like you can't possibly say no again. Trainor is fighting here for our right to say no as many times as we damn please. We're not being difficult, we're being human beings exercising our faculty for free will.

My favorite part are the following three lines:

If I want a man, then I'mma get a manBut it's never my priorityI was in my zone, before you came along, don't want you to take this personal

In 1960, the average age an American woman got married was when she was just over 20 years old. In 2011, a study found the average age that an American woman marries at now is 26 and a half. Women are getting married later for reasons experts theorize have to do with studying longer or wanting to get ahead in their careers. Trainor's song is a reflection of this. Women are human and may value romance, but at Trainor's age (or, I'd argue, any age), it's not necessarily a priority. Women can be in their zone minus a romance, something her male suitor seems to find unusual and unexpected.

So the next time you're feeling a little uncertain of yourself and your boundaries, put it on and crank it up. It's everything women need: a self-reliance banger.

More like this
Spice Girls’ Net Worth: The Richest Member Is Wealthier Than The Rest Combined
By Hugh McIntyre
Is Megan Fox Pregnant? MGK Gave A Shout-Out To Their “Unborn Child” Onstage
By Hugh McIntyre
Britney Spears Set A Wedding Date With Fiancé Sam Asghari & Previewed Her Dress
By Bustle Editors
The 1st Photo Of Priyanka & Nick's' Baby Comes After 100 Days In The Hospital
By Jake Viswanath and Hugh McIntyre
Get Even More From Bustle — Sign Up For The Newsletter