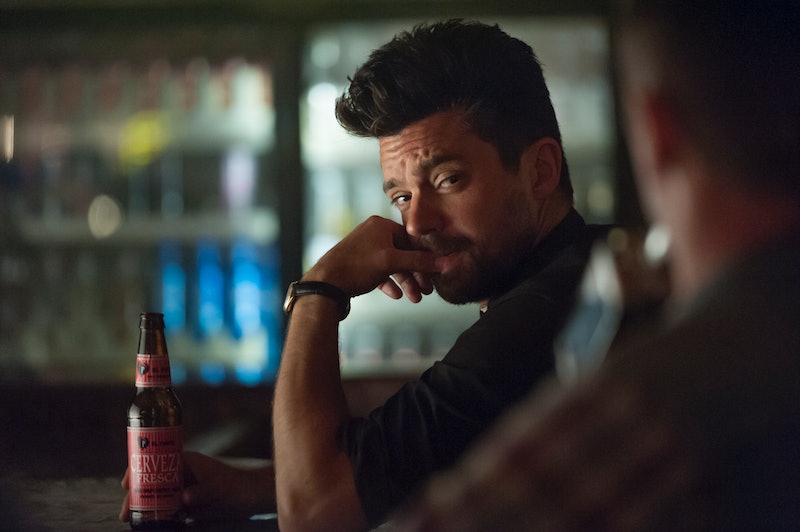 As a person who has been following Dominic Cooper's career since he was in History Boys in 2006, the British actor's role as Jesse in Preacher is an exciting turn. The series had an electric premiere on May 22, but it may have left you wondering what the Preacher's powers are. Looking at AMC's website won't give you any concrete answers since it states that Jesse Custer becomes "inhabited by a mysterious entity," which was pretty clear by the smoke monster-like thing that entered his body in the pilot. So if you can't wait for future episodes to help explain what's happening to Jesse, the best place to turn is the graphic novel of the same name that inspired the series. Spoilers from the comics follow.

Through its adaptation of Preacher , AMC is hoping to achieve another successful TV series from a comic book, with the help of executive producers Seth Rogen and Evan Goldberg. The show is based off of the cult comic from writer Garth Ennis and artist Steve Dillon — and the "cult comic" inspiration helps explain the series' freaky imagery and badass fight scenes. While there are certainly supernatural elements to Preacher, including the fact that Jesse's new Irish friend Cassidy is a vampire, that doesn't mean you should expect to see any superheroes. Yes, Preacher was published by an imprint of DC Comics, but Jesse is certainly no Superman.

Yet, Jesse does obtain a magic power in the TV series that is the same as what he has in the comic books, according to Vulture. As shown in the pilot, this power came from beyond the Earth, which viewers knew from the convenient placing of the words "outer space" on screen. Thank you, directors Goldberg and Rogen, for the clear-cut explanation.

As the preacher with a killer past in the small town Annville, Texas, Jesse is consumed by the comet-like thing that is shown destroying other men of the cloth around the world. But instead of it killing Jesse, it knocks him out for three days and instills him with a power — one that makes a man of his parish literally open his heart to his mother by carving it out with a knife. After all, Jesse did tell him to, "Be brave. Tell her the truth. Open your heart."

Although Jesse doesn't know about Ted's fate yet, he's sure to figure it out that he's not just a super skilled killer anymore — he has a supernatural power. And at least in the comic books, that power goes by the name of Genesis and it's the unique offspring of an angel and a demon.

The powerful entity of Genesis gives Jesse the ability to say commands that must be obeyed, even if he doesn't mean them literally. Jesse, the struggling preacher with killer instincts and penchant for Westerns, is now embodying this power and just in case you didn't realize how truly powerful Jesse becomes when Genesis enters his body, it doesn't hurt to know that the name "Jesse Custer" is an anagram for "Secret Jesus."

Now if Preacher's dark take on religion wasn't already irreverent enough for you, in the comic books, it's clear that Genesis provides Jesse with a power that rivals God's own power. Jesse's newly acquired omnipotence eventually leads him to embark on a journey to find God, who had abandoned heaven after Genesis was created. Considering that both Jesse and Arseface have been hearing silence when they pray, the TV show may be following that storyline.

But while it seems like Jesse will have essentially the same powers in the show as he did on the comics, I'm not certain if the quest for God will go down on the AMC series. As Vulture explained, though the TV version of the characters are very similar to their comic counterparts, the actual plot has changed a lot from page to screen. Still, Jesse is a man of God who obtains a power that is pretty much superior to God's, so wherever Preacher takes that story, it's bound to be entertaining.