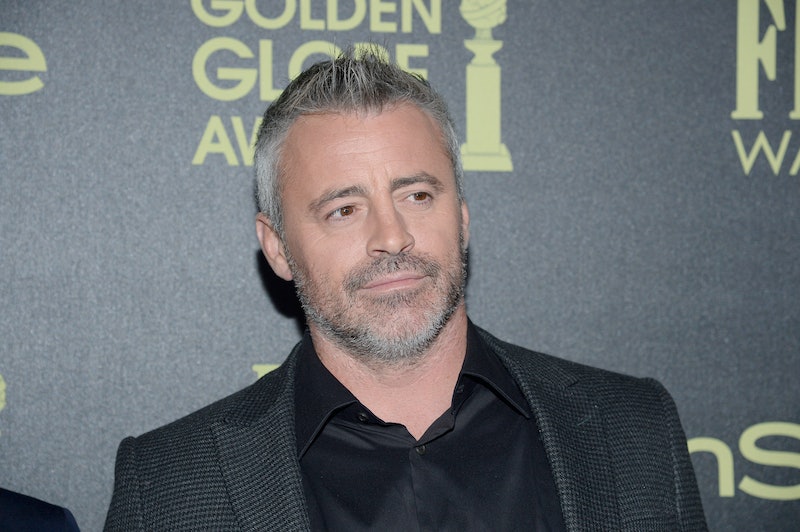 CBS is indulging in the world's '90s nostalgia with a new comedy starring Matt LeBlanc, but don't expect LeBlanc to be channeling his inner Joey for the role. The new LeBlanc comedy, Man With a Plan , could lead to a pseudo Friends reunion on CBS if the network decides to pair LeBlanc's show with Matthew Perry's The Odd Couple — Chandler and Joey would be next door neighbors, you guys — but the show sounds nothing like Friends. In fact, before CBS settled on the title Man With a Plan, The Hollywood Reporter notes the series was called I'm Not Your Friend . That's a not so subtle way of saying although LeBlanc is returning to network TV, he is not channeling Joey Tribbiani.

In Man With a Plan , LeBlanc will be playing a contractor who has to adjust to hands on parenting when his wife returns to work. It won't take long for him to realize being a family man is not as easy as he thought it was. It's a fairly standard sitcom plot, but it will allow viewers to see a more mature LeBlanc. The man is now playing a sitcom dad — that is a role miles and miles away from Joey.

Man With a Plan is still bringing LeBlanc back to his roots in a couple of meaningful ways. LeBlanc spent five seasons on Showtime's Episodes playing a fictionalized version of himself. The series was sleek, bawdy, and it allowed LeBlanc to poke fun at his image. It was as far away from Friends as LeBlanc cold possibly have gotten at the time even though Friends was a part of his character's life. Thanks to Man With a Plan, LeBlanc is returning to network TV and the world of multi-camera sitcoms, something he hasn't done since the ill-fated Friends spinoff Joey.

The actor is returning to the arena that made him famous with a familiar (behind the scenes) face by his side. THR also revealed acclaimed TV director James Burrows, who was honored by the Friends cast in a 2015 special for his directorial contributions to the series, is directing the pilot. Burrows is a legend in the world of TV sitcoms. The man has directed episodes of everything from Cheers to Will & Grace to The Big Bang Theory, which means the Man With a Plan pilot is in good hands.

The big question is: Will Friends fans follow LeBlanc to such an un-Friends like show? Since there is no preview available just yet, there is just the plot information to go on when it comes to Man With a Plan, and it sounds like a standard CBS family sitcom. Hopefully, it will have a bit of an edge to it, like the underrated Mom, but so far it doesn't sound like a stretch for the network that gave the world Mike & Molly or the aforementioned The Odd Couple.

It is going to be a few months before Friends fans get to see LeBlanc back in action on network TV — it could even be awhile before a preview is released since The Office's Jenna Fischer departed the role of LeBlanc's wife — but at least you can look forward to seeing an all grown up LeBlanc flex his sitcom muscles. He may not be Joey anymore, but face it, LeBlanc will always be one of your favorite Friends.