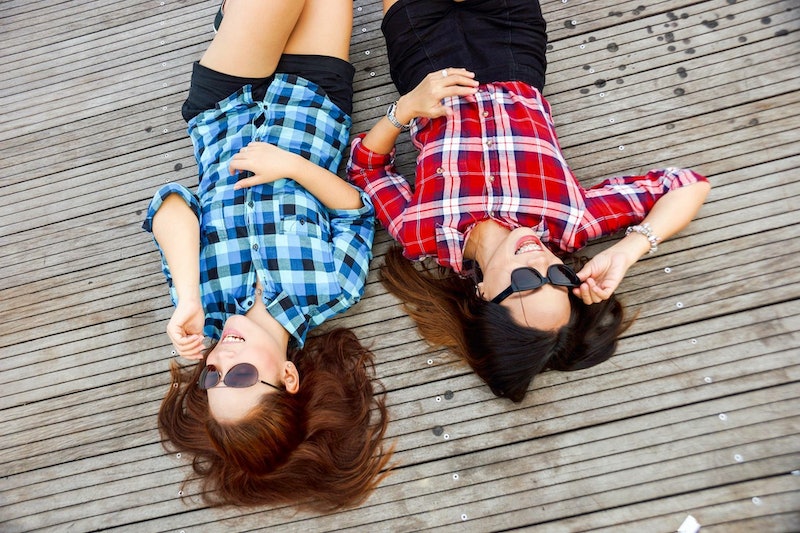 It's no secret that wealth can totally buy happiness — oddly enough, stressing out about how to pay your electric bill every month doesn't appear to be conducive to a carefree lifestyle — but does money buy friends? If you go by the portrayals of the rich and famous in the media, the answer is an unequivocal affirmative (until the character scandalously loses their fortune and, by extension, their upper crust social circle). According to research profiled in the Science of Us, however, the real answer is more complicated than you'd think.

In a study published in last month's Social Psychological and Personality Science, researchers used data from two national surveys, the 2012 General Social Survey and the American Time Use Survey, to analyze the social lives of thousands of adults. After taking into account factors like age, gender, and household size, they looked at the relationship between socioeconomic status and social life. Rather than focusing on wealth's effect on your number of friends, as other studies have done in the past, this particular study analyzed the makeup of the social circles themselves — that is, whether people hung out more with friends or family. Here's where it gets interesting: According to the analysis, low-income people spent more time with family and neighbors overall, but the rich spent more time with friends.

Wealthy respondents spent an average of 22 more minutes every day with people to whom they weren't related, but they spent nearly 26 fewer minutes with family and 10 more minutes alone than low-income Americans. Over time, such isolation adds up; further analysis found that rich people spent 6.4 fewer evenings socializing every year than low-income people, Vox reports.

The study wasn't designed to draw conclusions about why these results occurred, but researchers had a number of possible explanations. Firstly, poorer people may spend more time with other people out of simple necessity. As the study authors pointed out to Vox, the wealthy can afford to pay for babysitters and home repairs, while low-income individuals may have to rely on family or neighbors for the same tasks. As always, technology plays an important role; thanks to rideshare apps, for instance, you no longer need to rely on your social network for a ride to the airport or work — but only if you can pay for it. This could also tie into why the rich spend more time with friends as opposed to family; if you don't have to maintain relationships with your relatives, you're free to socialize with whomever you choose (or nobody at all).

Researchers also noted the importance of self-selection, aka spending more time with people like yourself. Whether it's a conscious decision or not, relying on wealth-oriented communities like private schools for socialization may cause wealthy people to end up less engaged with their neighborhood and more engaged with their friends of the same social class.

"If the wealthy are orienting their social worlds towards friends and away from neighbors and relatives, it seems likely that they also would be less involved in their residential communities," Emory University's Emily Bianchi explained to the Atlantic.

Again, these are just possible explanations; more research would have to be done to draw any conclusions about the cause of the results. Furthermore, neither way of spending time is better than the other. Solitude and loneliness are entirely different feelings, and it's possible to be perfectly happy with a few meaningful relationships.

That being said, the study speaks to the widening gulf between the rich and the poor in America, and it's a reminder that money really does make everything easier — even making friends.