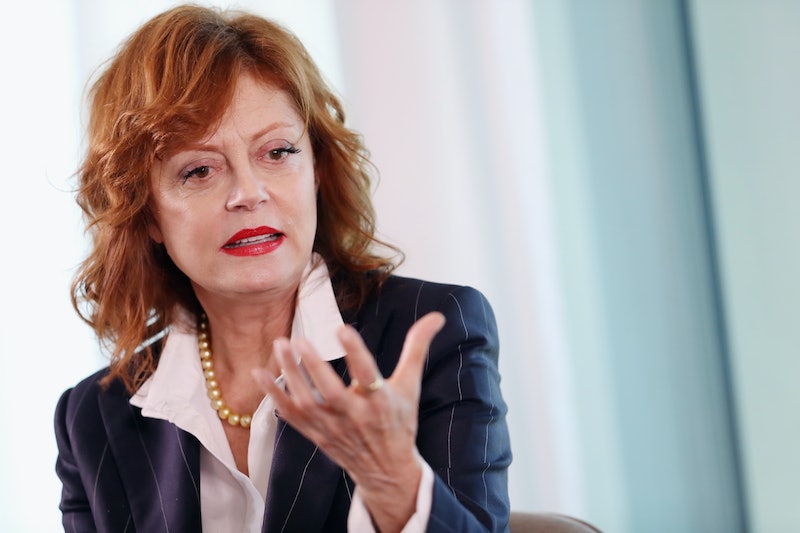 At the Cannes Film Festival, Woody Allen — and the allegations leveled against him that he molested his adopted daughter, Dylan Farrow, when she was a child — have been in the spotlight. First, French comedian Laurent Lafitte made a joke at the director's expense, and then an editorial written by Allen's son Ronan Farrow about the media's treatment of Allen made waves across the globe. Now, actor and activist Susan Sarandon has spoken out against Allen, her fellow Cannes attendee, with some powerful and critical remarks.

Speaking about Allen at Variety and Kering’s Women in Motion talk with Thelma and Louise co-star Geena Davis, Sarandon said, “I think he sexually assaulted a child and I don’t think that’s right," according to Variety. “I have nothing good to say about him. I don’t want to go there." (Allen has repeatedly denied the charge that he molested Dylan, and has never been tried.) Sarandon's comments are especially powerful coming just days after Ronan's essay, which condemned the mainstream media for often ignoring the allegations while speaking to Allen, and also called out the many stars who continue to work with his father, some of whom have since defended their decision to collaborate with the famous director.

Sarandon is not alone among celebrities who have become outspoken in condemning Allen. Here are others who have spoken out against the filmmaker and have vocalized their support for his daughter Dylan.

The comedian recently tweeted that while Allen is her comedy hero, she does believe him to be guilty of the allegations.

The director described Ronan's essay as "very important" in a tweet, saying that "everybody should read this."

The actor and writer has frequently spoken out against Allen, saying on Marc Maron's WTF podcast that she believes Dylan and finds Allen "nauseating."

The Matilda star and writer tweeted her condemnation of Allen following Ronan's essay.

The comedian expressed her gratitude to Ronan and has actively engaged with the Twitter conversation about the accusations.

The young fashion and media icon tweeted her support of Dylan in 2014, and she devoted a large post in Rookie Magazine to sympathetic voices on the charges.

While many voices have been heard both for and against Allen, it's interesting to note how many celebrities have remained silent on the topic. Perhaps they feel that there is not enough evidence on either side, or maybe Ronan's point that Allen's influence is so much that stars are hesitant to criticize him has legitimate basis. It's good to see the stars above, though, speaking out about their beliefs in such powerful ways.

While in Cannes, Allen gave the following statement about Farrow's editorial and Dylan's accusations, saying, according to Vulture:

In 2014, he made the following statement in a New York Times essay he wrote in response to Dylan's accusations:

"Of course, I did not molest Dylan. I loved her and hope one day she will grasp how she has been cheated out of having a loving father and exploited by a mother more interested in her own festering anger than her daughter’s well-being. Being taught to hate your father and made to believe he molested you has already taken a psychological toll on this lovely young woman, and Soon-Yi and I are both hoping that one day she will understand who has really made her a victim and reconnect with us, as Moses has, in a loving, productive way."