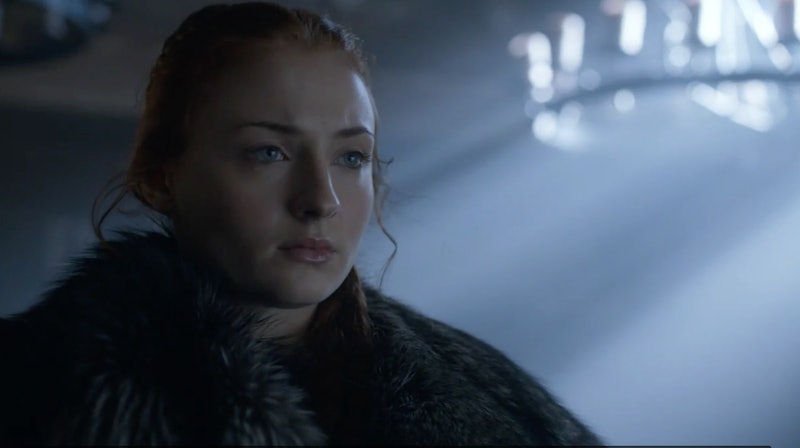 Mark it on the calendars, friends. Tonight, Game Of Thrones threw all of us fans a giant, delicious bone when they finally allowed Stark siblings to be in the same place together and to embrace over a disgusting horn full of Night's Watch ale. Jon and Sansa reunited at Castle Black on Game of Thrones, like we all assumed that they would. Sansa rode in with Brienne just as Jon was getting ready to peace out of there. When they finally got to sit and chat, there was some seriously adorable sibling banter and there was also something else that I didn't expect to see: Sansa was a complete boss and insisted that Jon gather the Wildlings to march on Winterfell. Sansa is ready to kill Ramsay, and I am absolutely loving her new savage attitude.

Let's be honest, who better to rid the world of Ramsay than Sansa Stark? She, of anyone, deserves the wonderful honor of snuffing out his last breath, and we deserve the honor of witnessing it. With any luck, we will get to see her take out Ramsay with her brother by her side. This is obviously a brand new Sansa and I think fans have been waiting for her boss side to break out. We all knew that she had it in her. Who has been through more than she has? I think it's time for us to see her get revenge and become a wolf. She could be the one to take back her home and reunite her family.

Hopefully she and Jon will even get to Winterfell in time to save their little brother Rickon before he suffers a fate equal or worse than Theon's. I have a feeling that this new Sansa will get things done.