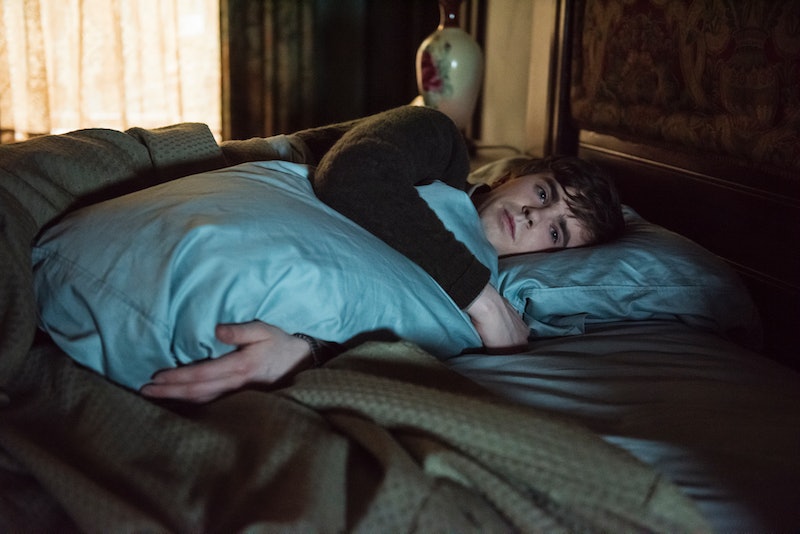 Norma and Norman's relationship on Bates Motel has never been what you would call healthy. In fact, at some moments it has been downright creepy. But it's their complex dynamic that makes the show so irresistibly watchable. Unfortunately, though, all good (and chilling) things must come to an end, so now that the Bates Motel Season 4 finale is just a few hours away from airing, it's time for us to once again check out of this motel madness and face the on-coming months of a Bates-less world. Thankfully, A&E already made the decision to renew the show for a fifth season back in June 2015 (both Season 4 and 5 were picked up by the network at the same time). So you can take comfort in knowing that its departure is only temporary. But as for when exactly Bates Motel Season 5 will premiere, that decision has yet to be made.

However, that doesn't mean we can't estimate a likely guess as to when the fifth season will be kind enough to grace our airwaves. While normally the series has debuted in early to mid-March for the last four seasons, according to Variety, Season 5 is going to work a little differently with both Season 4 and Season 5 airing in 2016. No official release date has been given, however, viewers can look forward to seeing the show's return much sooner than usual. But considering that could still be months away, you'll need something to help pass the time. Luckily, there are plenty of other shows out there that should be able to hold your interest. If you love Bates Motel, then you need to seriously consider making one of these shows your new placeholder obsession...

If horror is what you're craving, nothing beats the twisted creations that appear in Ryan Murphy's terrifying anthology series. It doesn't matter what season you start with, it's guaranteed to leave you horrified and facing nightmares for weeks (maybe even years) on end. You're welcome.

While AHS goes for the obvious shock factor, this Showtime hit series prefers to leave you in suspense and slowly build to some truly jaw-dropping moments. It's also one of the few shows out there that manages to be gory and also kind of gorgeous at the same time. It still delivers the bloodshed that you seek while exploring beautifully flawed characters you can't help but root for.

A reminder that as bad as this parent-child relationship may be, it could always get worse.

Not that Norman seems to need any help in this regard, considering he's killed many people and still never been caught. But it'll still give you that same rush of suspense that only covering up a murder can do. Plus, you simply can't go wrong with watching Viola Davis in action.

Norman may not have Dexter's moral code of only killing other serial killers, but he lashes out at those that he feels deserve punishment, whether it be due to abandonment or seduction. So, in a way, these two actually have a lot in common. (Is it too late for a crossover to happen?)

Because if you're looking to delve into the mind of a true psychopath, there's no one better than the infamous cannibal, Dr. Hannibal Lecter. Just don't tell Mother. She wouldn't approve.