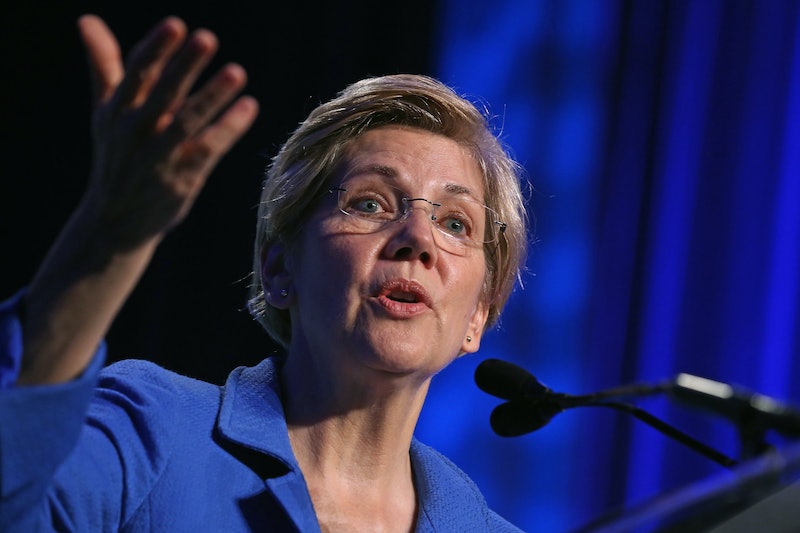 Massachusetts Sen. Elizabeth Warren has a record of dropping some eloquent truth bombs on the American public. Whether she's talking to her constituents, speaking on the floor of the U.S. Senate, or tearing Donald Trump a new one on Twitter, Warren stands out for her commitment to speaking with intelligence and conviction. It's something to admire about her, whether or not you agree with her policies. But that's also why it was somewhat disheartening to me to read that Warren quoted Taylor Swift in her commencement address at Bridgewater State University.

Addressing the graduates of the Massachusetts university on Saturday, Warren certainly offered up some inspiring advice to the class of 2016. “Knowing who you are will help you when it’s time to fight," the first woman to represent Massachusetts in the U.S. Senate told the graduates. "If you know who you are, you won’t get caught up when times get tough and the naysayers try to stop you.” Right on, Warren!

But then the senator decided to turn to draw enlightenment from another woman's pearls of wisdom — T-Swift. The former Harvard Law School professor quoted one of Swift's most famous lyrics:

She then quipped, “Knowing who you are helps you 'Shake It Off.'"

I completely understand what Warren was going for by quoting Swift. She was trying to connect with a crowd of (almost certainly hungover) millennials, and she nailed it. And no wonder; I spent a good chunk of my sophomore year of college playing "Love Story" over and over and over again. (My utterly lackluster undergraduate romantic life is another post for another day!)

However, I can't help but hope for more from Warren. The seems simply beneath her. Couldn't Warren have gone for Eleanor Roosevelt, Rosa Parks, Betty Friedan? Or couldn't she have at least chosen someone who didn't infamously overreach in using Madeleine Albright's "There's a special place in hell for women who don't help other women" to Katie Couric?

Granted, it's not as if Warren were quoting Swift on the floor of the Senate. Commencement speeches follow their own standards of rhetoric. They tend to be more playful, friendly, and uncontroversial, because it's a celebratory day. And who doesn't want to celebrate with Tay?

Perhaps I hold Warren to a higher standard because I expect more of her. As Bustle' Kastalia Medrano wrote of the Massachusetts senator, Warren "has emerged as, arguably, the only prominent politician on Twitter who’s successfully using Trump’s own language and tactics against him without stooping to his level." She's been one of the most ardent and articulate Trump critics among the Democrats. She manages the fine line of hitting him hard on social media, never shying away from her own bombastic style but actually backing it up with information. She plays a valuable role, and I cringe — but would not be surprised — at the prospect of her clout and her intelligence being questioned because she's trying too hard to seem "cool" by quoting T-swift.

In general, I think it does a disservice when politicians try to up their appeal by buddying up with celebs or seeming like they're clued in with popular culture. I'm more than okay if my elected officials aren't listening to the latest track from Swift, watching Broad City, or coming up with their March Madness brackets. When politicians drop their pop culture know-how on us in that "Look, I'm cool! I'm just like you!" way, my mind reflexively thinks of all the other topics I'd rather they be focusing on. Like closing tax loopholes, pressing gun control reform, devising more comprehensive strategies to fight ISIS, just to name a few.

Warren is such an articulate, intelligent politician — and both of those attributes are only highlighted when someone as boorish and crass as Trump reportedly refers to her as "Pocahontas." But because Warren's strength is not just in being an attack dog against the presumptive Republican nominee, but also in being a smart, sharp, discerning one, I hope she'll refrain from quoting Swift in the future and stick to her own sage words.

More like this
Taylor Swift, Kerry Washington & More Speak Out On Uvalde Mass Shooting
By Jake Viswanath
How To Support Gun Control Reform Right Now
By Morgan Brinlee and Carolyn Steber
10 Times Diana & Meghan Spoke Similarly On The Royal Family
By Sophie McEvoy
Harry Styles Addresses The Theory That His New Song "Daylight" Is About Taylor Swift
By Jake Viswanath
Get Even More From Bustle — Sign Up For The Newsletter