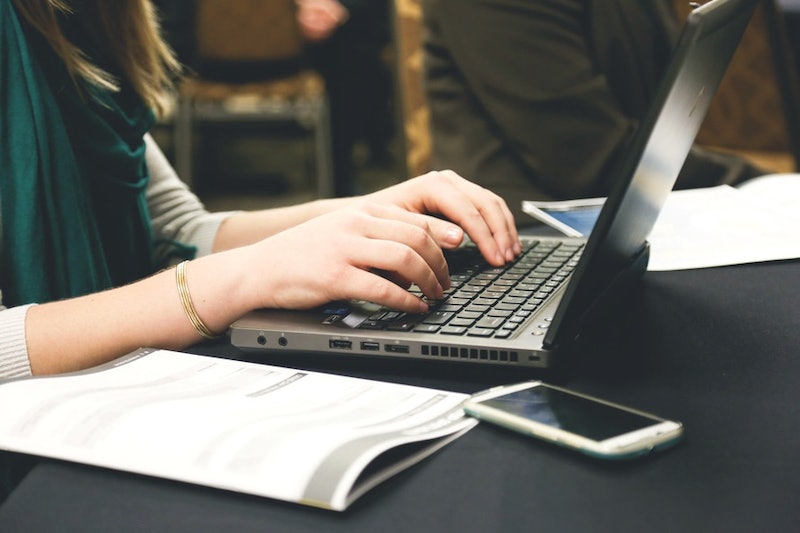 To some degree, as children, we all write fan fiction. We play pretend games on the playground with our friends, or insist on dressing up and acting out as certain characters on Halloween (and then insist on wearing that same costume out to random grocery store trips), or we have very vivid imaginings of what characters would be like if they were really our best friends the way we wanted. A lot of us just grow out of this kind of behavior, but for the people who grew up to write and read fan fiction, this was just the precursor — the way we expressed ourselves before we had the tools to do it in writing, or even the knowledge that the idea of "fan fiction" existed.

Like most people, I never started writing fan fiction to become a better writer. I wrote fan fiction to bring Chris Halliwell from Charmed back to life. I wrote fan fiction because I was impatient waiting between installments of Harry Potter books. I wrote fan fiction without even knowing what it was, except that it was fun and fulfilling. When I finally figured out around the age of 11 that there was a whole enormous community doing the exact same thing, my little brain was blown, and thus began a now 13-year descent into one of the most infamous realms of the internet.

Of course, when you're a kid — at least when you were a kid in high school in the '00s — you kept your mouth shut if you wrote fan fiction. Whatever meager social standing you had would surely be decimated in a second if you were like, "Yikes, I'm so tired from all the Batman AU I was writing last night, ya feel?" Because of my unfortunate embarrassment about writing fan fiction, it took me a long time to really appreciate just how much it did for my writing — not just my fan fiction writing, but my personal writing, and the eventual understanding that it was what I wanted to do with my human life. If you ever wrote fan fiction, or if you're still writing it now (#guiltyascharged), then you probably understand all too well the ways it made you the writer you are today.

You Learn Early On How To Take Criticism

Your classmates were crying when they failed their first high school essays, but by then you'd gotten at least a dozen flames from anonymous users incorrectly spelling words like "DIE" all in caps lock — you weren't going to cry over a dumb D.

OK, OK, the extremities of internet trolls aside, fan fiction was truly the first community-based writing experience for kids who were too young to join writing workshops out in the real world. I had beta readers on other continents proofreading my fan fiction before I was old enough to peer review essays in class. And yeah, when you're young it stings the first few times even getting helpful, constructive, and kindly-phrased advice, but we got used to it pretty quickly. When you have a thick skin early on, it makes you that much more receptive to constructive criticism not just in your writing, but in all aspects of your life. You learn how to set your personal feelings aside for the sake of bettering your writing and yourself, without even realizing you're learning it.

You Have Genuine Proof Of Your Progress

There is a part of me that is deeply and infinitely embarrassed by what I wrote in 2002, but deleting it would feel like setting myself on fire. When you've been writing fan fiction long enough, your old works, clunky and awful as they may seem to you now, are like a time capsule to the writer you once were. I love going through the writing I did when in middle school and high school and seeing the genuine progress I've made doing something I love so much (and also low key being smug that my 11-year-old self's grammar was on point). This happens to some degree with all writers, of course, but fan fiction writers have a strange kind of immortality, seeing as all of our works were immediately posted online and don't get "lost" the way other writers' works can. There is no escaping your past self, so you might as well just fist-bump them across the time-space-nerdfest continuum.

We're a lot nicer about it these days (I think?), but there was nothing more acutely embarrassing as a fan fiction writer than getting caught blatantly ignoring canon in a canon-compliant story. Even if you were pretty sure you could fake it based on the movie or book or show alone, you still wanted your writing to be authentic, so you immersed yourself in that world — which is why I personally know way too much about 19th century French revolutions and enough Star Trek and Star Wars jargon to make a non-nerd cry. Your enthusiasm for the subjects bred a thoroughness that you ended up accidentally taking with you for your whole academic life and writing career outside of fan fiction.

And hey, if all else failed, you learned the majesty of slapping the words "COFFEE SHOP AU" in the tags and hoping for the best.

Psst, check out our podcast, The Chat Room, for talk about all things internet (and Emma's unrepentant obsession with fan fiction).

You Foster Relationships With Other Writers

It's easy to write in a bubble and be weirdly afraid of other writers. You know that you need each other's support to succeed in a field this unpredictable and grueling, but at the same time, in college fiction workshops it seemed like a lot of us would rather crawl into a hole than let the class read their work. Writing fan fiction, on the other hand, broke that ice pretty early on — before you knew it, you weren't just beta-reading and reviewing other people's works, but messaging them, or sharing links you found funny with them, or even (this is about to date me) chatting them on AIM. In the decade plus I have been lurking on fan fiction, I've made lifelong friends with other writers; I've watched them grow and become better writers, and watched them grow up into full-fledged humans with jobs and mortgages and even babies. I found a cohort before I should have been old enough to find one, and it made it that much easier to connect to writers in the ~real world~ when the time came.

You Get A Sense For What Your Readers Really Want

Yes, some people accuse fan fiction of being purely wish fulfillment — and to them I say, what the hell is wrong with that? Reading is meant to be an escape from reality, and a lot of people want that escape to reflect their own desires, whether it has to do with adventure, or romance, or mind-numbingly cute fluff. It is fascinating seeing the varied responses to type of fic that you write, especially since it is so startlingly immediate compared to other forms of writing. That's what makes the reader-writer relationship on fan fiction so unique — your writing can be influenced by a readers' responses before the work is even finished. Does your story always make perfect sense? Hell no! But there's a lot more room for not making sense in fan fiction, and along the way you start to gain better understanding of what kinds of elements that people really really respond and relate to in stories.

You Get A Sense For What YOU Like To Write

Eventually you notice patterns in your writing — types of character dynamics you get excited about, or plots you tend to gravitate toward, the kind of writing that you feel you can speak to and genuinely enjoy creating. And then when it comes time to write your own works, you're equipped with so much more knowledge about yourself as a writer that you know exactly what kind of plots you'll give up on, or what kinds of devices will ultimately bore you, and you will actively avoid burning out on a story the way so many other writers have in the past.