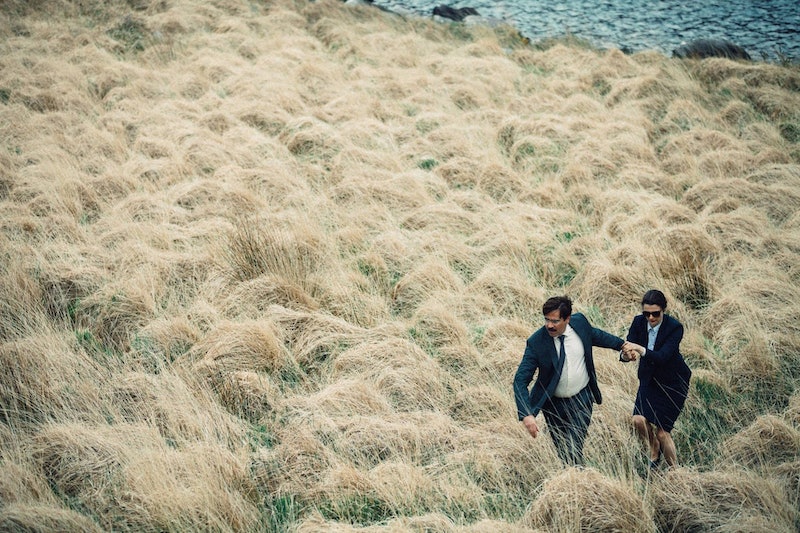 The Lobster, the dark, new dramedy starring Colin Farrell and Rachel Weisz, attempts to take on our mainstream ideas of love. Set in a dystopian world where adults must be in a relationship or risk being turned into an animal (the exact parameters are never explained), The Lobster presents itself as satire meant to critique modern society's obsession with love. For example, in the movie's world, a successful match can typically only be made if two people share a defining trait, like a limp or frequent nosebleeds — not dissimilar to dating someone based on the answers to questions on OKCupid. Yet while the film successfully satirizes ideas of modern love, it fails in one very important aspect: the portrayal of women. Women in The Lobster are overwhelmingly seen as love-hungry, crazed, and jealous, while the men stay sane. In a world were love has been made clinical, the only people who act irrationally when it comes to love are women, despite the fact that men have just as much at stake.

When David (Farrell) checks into the hotel where he is to find a mate in 45 days or else be turned into the animal of his choice, a lobster, some of the first women he meets are Nosebleed Woman (Jessica Barden) and Nosebleed Woman's Best Friend (Emma O'Shea). The two young women are pals who left school and checked into the hotel, determined to find matches together. But when Nosebleed Woman finds a match and her best friend fails to, all of a sudden Nosebleed Woman turns into the girl who rubs her relationship in her single friend's face, and her Best Friend turns into the jealous BFF who is so bitter she'd rather spend her last night as a human watching Stand By Me alone than with her one friend.

Then there's Biscuit Woman (Ashley Jensen), who is so distraught at her inability to find a mate that she throws herself out of her room, only to survive the fall and end up screaming in pain until people come to help her. It's a sad, horrible image, but it's played mostly for laughs. In a twisted attempt at finding a mate, David pretends to be unmoved by the Biscuit Woman's screams in the hopes of matching with Heartless Woman (Angeliki Papoulia). So the scene, instead of being focused on the woman dying on the ground and the tragic pressure of finding a mate, is about David's humorous and awkward attempt to impress someone. The Biscuit Woman's attempt to take her own life is ridiculed, belittled and dismissed as the acts of a woman desperate for love.

Once David (spoiler alert) escapes the Hotel after his romance with Heartless Woman ends, he joins the Loners, a group of single people who live out in the Forest. There, romance of any kind is forbidden, and they live under constant threat of being captured by the people at the Hotel and be turned into animals. Yet, as soon as David finds love with another Loner, Short Sighted Woman (Weisz), the Loner Leader (Léa Seydoux) becomes vindictive. She hates their relationship so much that she takes drastic, and somewhat murderous, measures to ruin it. Why she is so threatened is a mystery. David and his Short Sighted Woman have no plans to take control of the Loners, and hold no ill will towards the Loner Leader. If anything, their love and plan to escape together means that the Loners will have two less people to take care of. But the movie suggests that because the Loner Leader is a single woman, she must of course feel threatened by a relationship.

Single women in The Lobster cannot be anything but jealous, insane, or both. Their envy leads them to make irrational and dangerous decisions, yet even these acts of desperation are not explored or truly given weight in the narrative. Instead, co-writers Yorgos Lanthimos and Efthymis Filippou (both men) dismiss the women's actions as either humorous devices or plot twists. By assigning all the irrational acts to the female characters, the filmmakers make clear that, in any world, no matter how dystopian, women will always be crazy, love-obsessed creatures. For a movie that is so original in many ways, this fact is a disappointing throwback to films of the past.