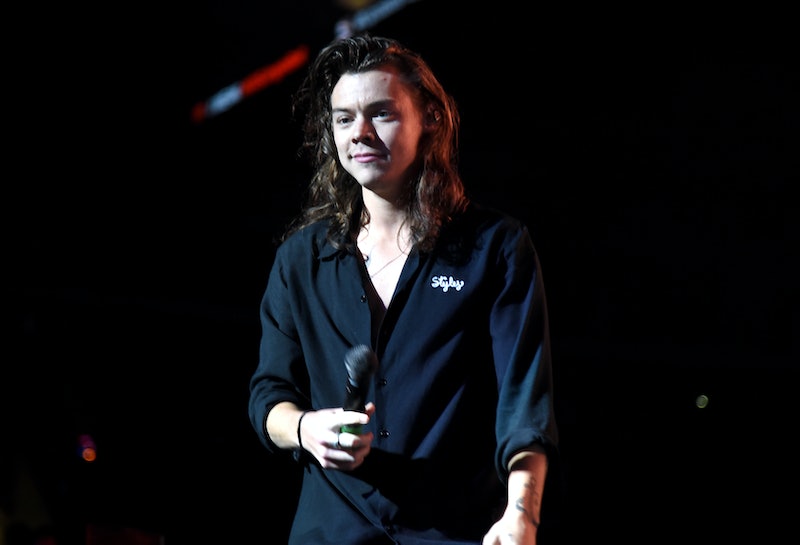 Sometimes, there's nothing like a dramatic haircut to really stir Twitter into a frenzy, right? Long story short, Twitter wants to see Harry Styles' new haircut, and they want to see it now.

The pop star made major waves when he cut his hair for charity earlier this month — he revealed his new 'do on his Instagram account in a rather unconventional way, by showing the hair that was chopped off, rather than the haircut itself (Oh, Harry). It's been rumored that the motives behind the cut are manifold — because in addition to donating his hair, it also looks like he may have cut it for his role in Christopher Nolan's upcoming WWII drama, Dunkirk.

Now, Harry has technically been snapped with his newly shorn hair — it's just that he's wearing a hat in every single picture. The former 1D star is definitely waiting for the right moment to unveil his new 'do — and the anticipation is more than many of his most devoted fans can take. Fans have had over a week to express their dissatisfaction, and they've done it well. Let's take a look at their many prongs of attack — as you'll see, his fans are quite creative when it comes to requesting a look at his new haircut.

Why the hat, man?

Some Wanted To Take Matters Into Their Own Hands...

... While Others Are Waiting (Not So Patiently) For the Paparazzi

Some Got... Passive Aggressive

Think he gets the message?

A Lot of People Expressed Their Desperation with ALL CAPS

Some Started To Feel Like Javert Waiting For Valjean

In a battle between Javert and Harry Styles, who would win?

Some People Got A Little Angry...

... And Others Got A Little Poetic?

It's practically a haiku.

Even MTV Got In On The Action

Some Got Really Dramatic

The next step is a ransom note.

Some Even Got Creative And Asked Kendall Jenner

There's only one way to end this madness, Harry. Really, a simple selfie will suffice.