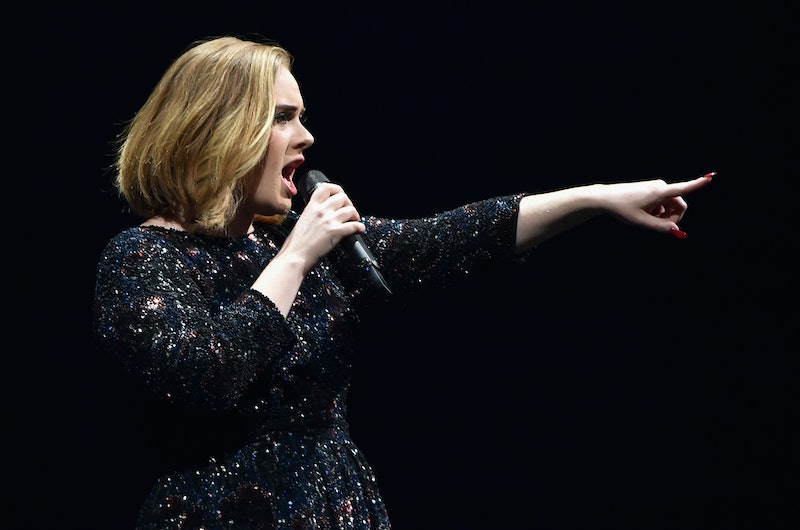 Ever since her autumnal return with her third studio album 25, Adele's high-power voice has been warming (and breaking, let's be honest) our hearts throughout these last few months. Granted, the British songstress has currently been on tour and laying low for a little bit in terms of new tracks. How timely is it, then, that Adele announced that the "Send My Love (To Your New Lover)" music video is slated to debut at the 2016 Billboard Music Awards on Monday? It's very possible that this track is primed to be the 2016 song of the summer.

All right, I can feel you eyerolling at the screen right now. Even the most intense Adele fan will cop that her M.O. is to do songs mourning lost loves, songs that have you wallowing in your break-up. Nobody wants to be sobbing into their margarita this summer. But if you didn't get un-stuck from looping "Hello" ad nauseam and never made it to track two off 25, let me tell you: "Send My Love (To Your New Lover)" is Adele's self-described "happy you're gone" song. We're not mourning singledom here (or, rather, catching a better summer fling after being flung by your winter S.O.), we're celebrating it.

The fact that the track has tangential ties to Swift definitely bolsters its pop credibility. After all, Swift used her 2012 album Red to transition from country darling to bubblegum starlet. And, while I don't see Adele abandoning her piano-driven throwback sound anytime soon, "Send My Love (To Your New Lover)" is definitely a step towards a more mainstream sound, the kind that won't send you into a deep depression if it came on in a tiki bar. Yes, the song takes a minute to warm up properly, but it disperses into peals of jubilation. And hearing that fun, upbeat side of Adele, who we've rooting for every step of the way, is really a win for everyone.

Still, could it be summer anthem status? I would say it's all going to rely on a matter of packaging. When Adele came back to us last October is was a brilliant power move; so much time had past between 21 and the debut of "Hello" that we all fiercely missed her, accepting her back with open arms and ears. Now granted, since then Beyonce released Lemonade and Ariana Grande is creeping up with her highly-anticipated album Dangerous Woman . No one can deny that competition for the summer song of 2016 is already pretty fierce.

Still, Adele can totally capitalize on her power (and divert attention back on her comeback) with the music video for "Send My Love (To Your New Lover)." Thus far the promo looks a little underwhelming — although, fairly, most promos do — so I think she'll have to really showcase something special. She does that, and the song of the summer is in the bag.

We'll be waiting anxiously for the video to drop May 22. And regardless of the video's outcome, definitely anticipate "Send My Love (To Your New Lover)" as a song of summer 2016... one you can really raise a margarita glass to.