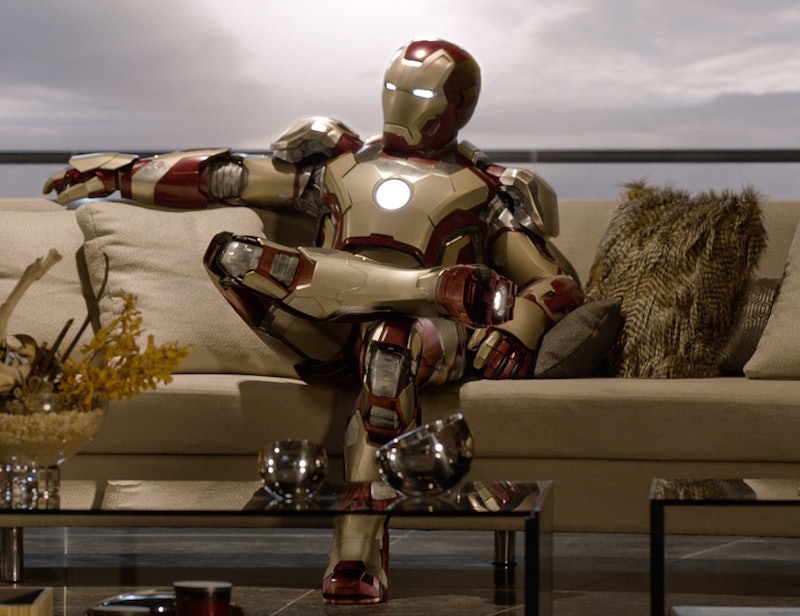 In 2013, Marvel introduced the villain that could be best described as a fan-gone-wrong for Tony Stark: Aldrich Killian. The character was played by actor Guy Pearce and created the Extremis Virus, not to mention set up the fear of a terrorist known as the "Mandarin" in the film Iron Man 3. However, in an interview with Uproxx, the film's director, Shane Black, shared new details on some script changes that allegedly occurred in pre-production. And, according to Black, there was originally supposed to be a female villain in Iron Man 3 until some changes to the script ended up being made. Bustle has reached out to Marvel Studios for comment, but have yet to receive a response.

"All I’ll say is this, on the record: There was an early draft of Iron Man 3 where we had an inkling of a problem. Which is that we had a female character who was the villain in the draft," Black alleged to Uproxx, "We had finished the script and we were given a no-holds-barred memo saying that cannot stand and we’ve changed our minds because, after consulting, we’ve decided that toy won’t sell as well if it’s a female." And that's far from all he's claiming.

"In the earlier draft, the woman was essentially Killian — and they didn’t want a female Killian, they wanted a male Killian. I liked the idea, like Remington Steele, you think it’s the man but at the end, the woman has been running the whole show. They just said, 'no way,'" Black claimed. "...They never told me who made the decision, we just got that memo one day and it was about toy sales. That’s all I know."

If the concept of a female villain may have been pushed aside in the past, what does this tell us about the chances of one ever appearing in the future? So far, the closest we've gotten are Scarlet Witch's antivillain role in Age of Ultron and Nebula's antagonistic role as one of Thanos' warriors in Guardians of the Galaxy, but a female villain directing the plot on her own merits for her own plan has eluded us on the big screen so far. The lack of many female villains in the Marvel Cinematic Universe is certainly not due in part to the lack of female villains existing in the comic books. Some of the female villains that showed up in the comic books include the likes of The Enchantress (one of Thor's main nemesis'), Moonstone (commonly associated with Ms. Marvel), Viper (aka Madame Hydra), and more. Thankfully, some of these very villains may be coming to the MCU sooner rather than later. Possible female villains — such as The Enchantress or Morgan le Fay — could be appearing in upcoming Marvel films including Thor: Ragnarok and Doctor Strange.

On top of that, DC Comics is coming in strong with their own set of female villains to hit the big-screen. With characters like their very own Harley Quinn and Enchantress being introduced in this summer's Suicide Squad — and the recent announcement of an all-female spin-off film on it's way — it probably won't be long before Marvel takes their own steps to match this influx of female characters on both sides of the moral line. The Batman V Superman and Captain America: Civil War face-off was just the beginning.

Despite the alleged script changes, at least female Marvel fans can hold on to one thing: Captain Marvel is on her way with her own female-led superhero film set to hit theaters March 8, 2019, and Black Widow may actually get her own movie... eventually.