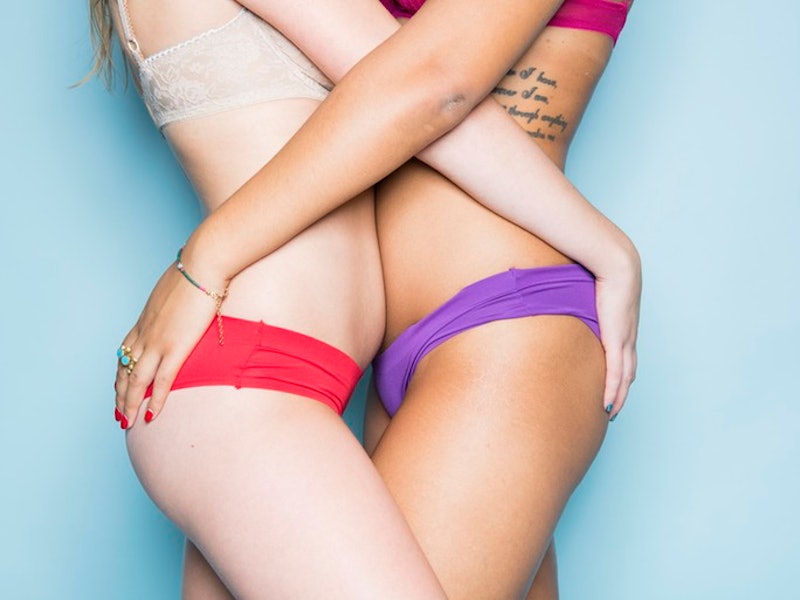 But why? I've heard arguments that it's more socially acceptable in women, that our body's react differently to sexual stimuli (do you know what happens when we watch monkeys masturbate?), but a new theory suggests it may be an evolutionary imperative. That's not to say there isn't a societal aspect to women being more willing to admit to it."Women, I do believe, are capable of being mentally attracted to another person easier than a man," Dr. Dawn Michael of The Happy Spouse and author of My Husband Won't Have Sex With Me, tells Bustle. "Women also have the social acceptance of openly being affectionate with another woman making it an easier transition over into a sexual connection." But where do the instincts come from in the first place? That's where evolution may step in.

In a recently published article in Biological Reviews, Dr. Satoshi Kanazawa argues that women's sexual fluidity evolved to "allow them to have sex with their co-wives in polygynous marriages, therefore reducing conflict and tension inherent in such marriages while at the same time successfully reproducing with their husbands in heterosexual unions" and uses statistics from the National Longitudinal Study of Adolescent Health to support this. This theory suggests if women were open to and interested in lesbian encounters, then they would have a happier polygynous marriage with higher chance of offspring.

Interestingly, he puts forward that this may mean women do not even have a sexual orientation in the way we commonly think. According to Kanazawa:

The theory suggests that women may not have sexual orientations in the same sense as men do. Rather than being straight or gay, to whom women are sexually attracted may depend largely on the particular partner, their reproductive status, and other circumstances.

He also thinks it could explain some other "puzzles in human sex research, including differences in female and male homosexuality, male arousal to lesbian sex, and menstrual synchrony." Menstrual synchrony may be the bane of my existence— you try having your period the same time as your girlfriend AND your roommate — but at it's really fascinating stuff.

It's not the first time science has looked at female sexual fluidity, here's what else we know. But first, check out our video on sex positions to last longer in bed:

2. And It's Not Limited To People

If you find yourself feeling sexually fluid or bisexual, don't let people tell you it's "just a phase." In fact, research from Lisa Diamond found that out of women who identified as bisexual during adolescence, a whopping 92 percent of them continued to identify as bisexual over the next decade. Phase my butt.