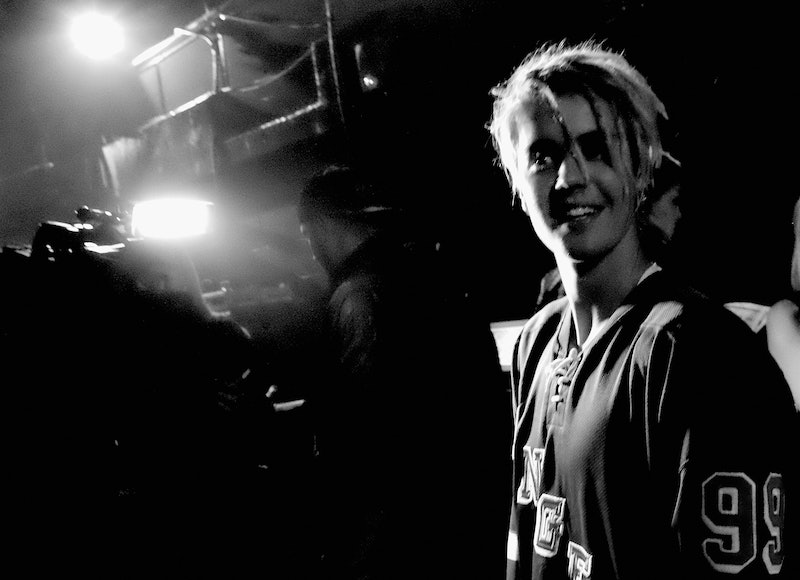 "Can we keep each other company?" seems to be the question plaguing Justin Bieber's mind when he sings on the track also not coincidentally titled, "Company." While most of 2015's Purpose explores themes of redemption and relationship turmoil, "Company" stands alone as an upbeat respite. But, is the Biebs prompting any one person in particular to keep him company? As in, who is "Company" about?

Since Purpose's release, fans have repeated the Biebs' own mantra, and launched it back at him. "What do you mean?," we all sincerely thought when Bieber told someone she could go "love herself" and apologized to others. What I'm saying is, Purpose bred more questions than it did answers, and we're all still a little bit confused on the inner workings of Bieber's life. "Company" seems to be no exception.

One look at the lyrics for "Company" and it becomes clear that perhaps this one isn't meant to be taken too seriously ("ain't that serious" is a direct line from the song). It's entirely possible, in fact, that the song isn't about any one person in particular. That it's just a dance track meant to please the Biebs' audience. Let's take a more in depth look at the lyrics to find out.

I mean, if he doesn't know the girl's name, then it's likely this song isn't about one of his past — or even current — relationships. Right? "Company" seems to focus on the idea of using someone you've just met as a kind of temporary escape ("set each other's lonely nights/be each other's paradise").

You ain't gotta be my lover for you to call me babyNever been around no pressure, ain't that serious

Though some might not be super enthused at this idea, it's becoming evident that "Company" is about a one night stand. Or a one night romantic rendezvous of sorts, if you want to read the PG version. All I'm saying is, this probably isn't a platonic situation.

It ain't about the complicationsI'm all about the elevationWe can keep it goin' upOh, don't miss out on usJust wanna have a conversationForget about the obligationsMaybe we can stay in touchOh that ain't doin' too much

No complications, no obligations, and maybe they can stay in touch. Yup. "Company" is exactly about what it promises to be about. Finding someone to keep you company for one night, and for probably one night only. If that's not already made lucid by a deeper delve into the lyrics, take a look at the "Company" music video below.

I guess it really isn't so complicated after all.