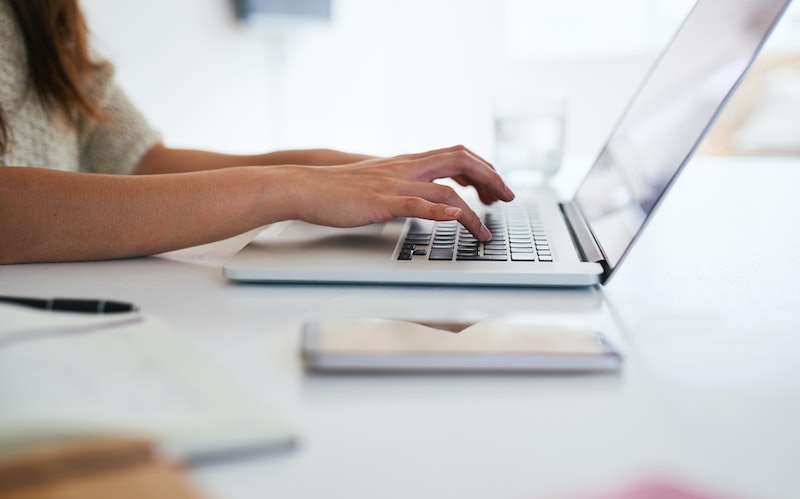 I try not to blame Mercury retrograde for all my life's problems, but sometimes your phone goes black for no reason, and your computer presents you with the spinning rainbow pinwheel of doom, and the trains are delayed because of signal malfunctions, and there's really no other explanation as to why this is all happening at once, you guys. There are many ways Mercury retrograde affects technology, and all of them are frustrating, so while this pesky little planet is up to its tricks, it's important to know what to expect. Of course, you can't just tune out entirely when Mercury retrograde hits, but there are certain things to look out for.

As any astrologist will tell you, Mercury is responsible for more than a little chaos when it's retrograde. During this period, the celestial body appears to be moving in reverse. It's not really, but the illusion can definitely mess with us. Mercury is thought to be the planet that oversees clear communication, and when it's retrograde things tend to go a little haywire. Signals get crossed. Words are misconstrued. We wrongly interpret messages, or don't fully read through important documents, or miss important facts. And yes, the gadgets that we depend on so dearly to communicate with — our phones, computers, and tablets — tend to experience a few glitches as well.

So what are you supposed to do? Don't power down everything immediately. You're a fearless Millennial, and that is no way to live your life. Instead, prepare ahead of time. Here are five ways Mercury retrograde impacts technology, so you know exactly what kind of tricks you're up against.

1. Your electronic devices may crash for no reason

Are you hitting save every five minutes on that very important document you're creating? You might want to consider it, if you're not. Mercury is the planet that oversees technology, and when it's retrograde, we're all in for some gadget-induced headaches. I experienced this firsthand this weekend, when I had to restart my computer twice after it kept freezing for no apparent reason. It was starting to overheat, and made that terrifying whirring sound that makes you think it's about to explode, or something. It didn't, thankfully, but it did seem to be a gentle reminder from the universe that yes, Mercury is still retrograde, and nothing is safe.

According to Astrostyle, these kinds of inexplicable electronic glitches are common when Mercury is retrograde. It's worth noting that these types of occurrences don't always happen, but if you are worried about losing precious info, make sure to save often, and back up anything important. Astrologists also sometimes advise against buying any new technology during this time. You don't want to spend a ton of money on a piece of equipment that ends up being corrupt.

This is actually one of my worst nightmares. Your computer is home to all your important documents, drafts, and projects. Even if you save things religiously, it's a good idea to make sure you have copies of the really crucial stuff on a separate USB or external hard drive somewhere. That way, if something accidentally gets deleted, you know you aren't totally screwed.

The same goes for photos you have saved on your phone or computer, too. It bears repeating: Back up everything, people. Back up. Everything.

Text messages are already notorious for being misinterpreted. When your friend texted you that simple yet ambiguous "OK," did she mean "OK everything sounds great," or did she mean "OK I'm actually pissed at you, please stop talking"? These types of dual meanings can be agonizing even during the best of times — and Mercury retrograde can wreak further havoc on communication. Try to say exactly what you mean, and if someone's text message confuses you, don't jump to conclusions. Ask that person to clarify. Also, if you're texting to make plans, be as detailed and clear as possible by mentioning exact times and locations.

Hitting reply all on a group email sent to your entire office is embarrassing — especially if you only meant to respond to one person with a joke only you two would find funny. During Mercury retrograde, always check twice before hitting send. Also, make sure to check your sent messages to confirm that your message actually went through to its intended recipient, and isn't casually sitting in your drafts folder, being read by nobody. These things are annoying, but they happen.

There is nothing in the universe more frustrating than a shaky internet signal. Unfortunately, this isn't super preventable, so have patience, and maybe keep your carrier on speed dial. If your Wi-Fi goes out while you're at work, make sure your supervisor knows that you're experiencing technical difficulties. Again, strong communication during Mercury retrograde is crucial.

Don't believe in astrology? Then chances are you likely don't buy into this Mercury retrograde hype in the least. But if I were you, I'd still play it safe when it comes to technology. Save your work. Back up your files. Make sure you aren't hitting reply all on emails. You aren't being overly cautious — you're just taking preventative action against technological mishaps that happen to all of us, Mercury retrograde or not.