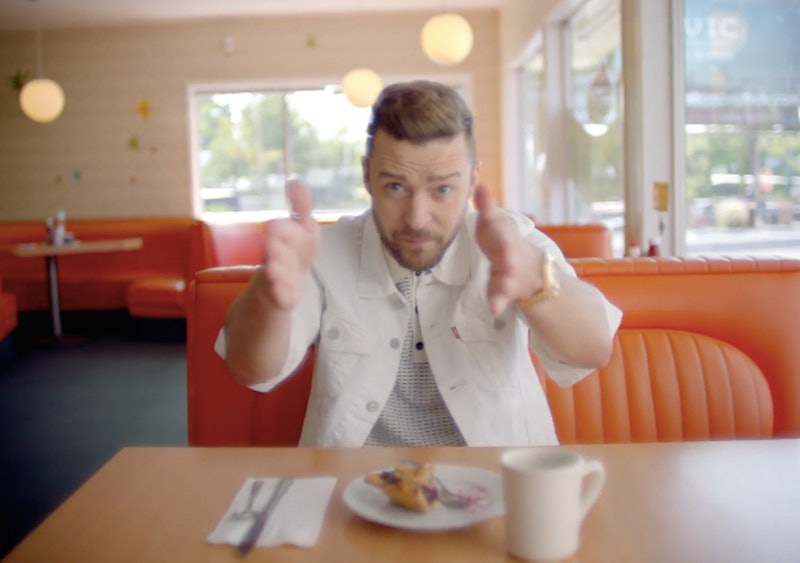 We've caught a lot of feelings after we watched Justin Timberlake's "Can't Stop The Feeling!" music video for the tenth time. Though the previous teaser video featuring the cast of Trolls would imply that the former NSYNC-er was aiming for a family friendly romp, nobody could've anticipated the almost Swiftian video of brightly colored backdrops and normies just dancing around like nobody's watching. I can only watch in light horror and wonder to myself where the hell was the Can't Stop The Feeling video shot... is it a place where sexy went to die, or...?

Well, you may be shocked to find out that it's actually a place where sexy tends to dwell, where, in fact, pretty much the hottest people you know congregate. Yes, "Can't Stop The Feeling" is primarily shot all over different parts of the Los Angeles area, particularly highlighting notable businesses. It's a strange take on things... perhaps Timberlake is trying to rebrand himself as an everyman, someone who's down to boast his choreographed dance moves with the City of Angels locals. Obviously, there's something doesn't work entirely with that image (see: choreographed dance moves). Whatever the case may be, you get a pretty amazing tour of certain L.A. establishments like...

The video doesn't keep the diner Timberlake's dining at a secret: it's clearly the delightfully retro Cindy's. Apparently this isn't Cindy's first rodeo, as the well-known establishment has appeared in films like Surviving Christmas and Ouija, as well as snagging a guest spots in Parenthood and Aquarius. This is the restaurants first starring role in a music video, to my knowledge. No word on what kind of pie Timberlake picked up during his visit. My bet's on blueberry, but I probably would've gone for butterscotch or sweet potato myself. You know, live it up a little.

That isn't just a charming name; there seems like a boatload of mini Venus Di Milos statutes out there (or maybe just a bunch of statutes in general, it's hard to tell with the guy dancing up front). In any case, the floral arrangement establishment has been around since 2010, and is a solid fixture in Koreatown.

As a tourist, you're probably not going to make a point to see Bernie's Highland Park location. But as a L.A. resident who is at the mercy of a car, it might be worth a visit next time you're having automobile difficulties: the repair shop has a five star rating on Yelp.

I can't assert which car wash it is, exactly, all I can tell is that it's located in Silver Lake (as evident by the Silver Lake awning) and that it's celebrating it's 15th anniversary. Again, I'm sure that it's a viable business because California is all driving all the time.

OK, Randy's Donuts it's technically in Inglewood, but it's one of the first landmarks you'll notice on the drive out of LAX. Maybe the gigantic donut on the roof makes it particularly iconic, maybe it's the classic donut experience, I'm not really sure.

Suffice to say, Timberlake does a lot of mileage in the "Can't Stop The Feeling" video, spanning all over Los Angeles (and then some). There's not doubt that a cameo in the video should do wonders for these little businesses, or at least add an interesting line on their resume. So feel free to scroll down and watch the "Can't Stop The Feeling" video below to get a true feeling of South California. Just try not to cringe too hard at Timberlake's weird grocery-shopping attempt to be a wholesome family man in order to promote Trolls properly. We get it, dude, you're a dad now.