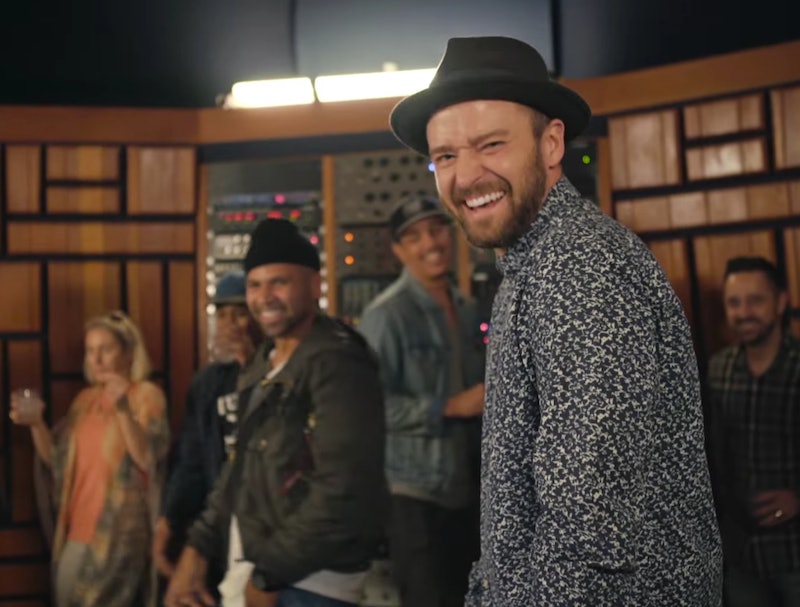 Although he is one of the most iconic recording artists of this generation — and perhaps of all time — Justin Timberlake has never been one to rush releasing music. Because of that, Timberlake's new single "Can't Stop the Feeling" is a reason to rejoice, and not just since the song is so damn peppy. "Can't Stop the Feeling" was released as part of the soundtrack for the upcoming animated film Trolls, of which Timberlake is one of the main characters. The song is reminiscent of Pharrell's release for Despicable Me 2, "Happy," essentially because it is just that — happy. Not to mention it's also super infectious and bound to be another hit for the pop master Timberlake.

Timberlake hasn't released new music since The 20/20 Experience from 2013, and, while "Can't Stop the Feeling" doesn't necessarily indicate a new studio album from him anytime soon, Trolls is helping you get your Timberlake fix. The cast of Trolls is out of control packed with celebrities and some of those all-stars are prominently featured in the "Can't Stop the Feeling" music video. While Zooey Deschanel, John Cleese, Christopher Mintz-Plasse, Christine Baranski, and Russell Brand aren't in the music video (possibly because all of them but Brand play the trolls' nemeses), I'm not complaining since other celebs from Trolls are shown having a blast dancing to the new song.

As Timberlake grooves with a crew in the recording studio, the following group of actors and musicians are featured having fun all on their own to Timberlake's new song. Here are the celebs of Trolls that you'll want to dance with to "Can't Stop the Feeling" after watching the music video.

Anna Kendrick is the lead of Trolls opposite Timberlake, and the pair of triple threats could not be more perfectly suited for the task. She dances by herself in a dressing room to her costar's song — complete with hairbrush microphone.

Kendrick's costar from Into the Woods and all-around nice guy James Corden has a personal rooftop dance party in the video. The Late Late Show host definitely needs to get Timberlake to do one of his Carpool Karaoke segments ASAP.

One of my favorite current comedians, Ron Funches, gets some serious screen time busting a move while hanging out in a video game arcade. The only downside is you don't get to hear Funches' infectious giggle while he's dancing.

The Big Bang Theory actor is no stranger to providing his voice to animated films since he was in Ice Age: Continental Drift. Kunal Nayyar is so moved by the music that he not only pulls out a guitar, but he gets up on his couch to dance.

The "I Love It" singers are characters in Trolls, but hopefully the duo of Icona Pop — Caroline Hjelt and Aino Jawo — will sing with Timberlake on the soundtrack too. Plus, they are accompanied by puppies in the video. Can it get any happier?

Gwen Stefani takes a page out of Corden's Carpool Karaoke book by singing along to Timberlake in her car. She doesn't get to show off her dance moves, but, just like anyone who hears "Can't Stop the Feeling," Stefani can't help but smile.

Thanks to Timberlake and his cast, the release of Trolls can't happen soon enough.