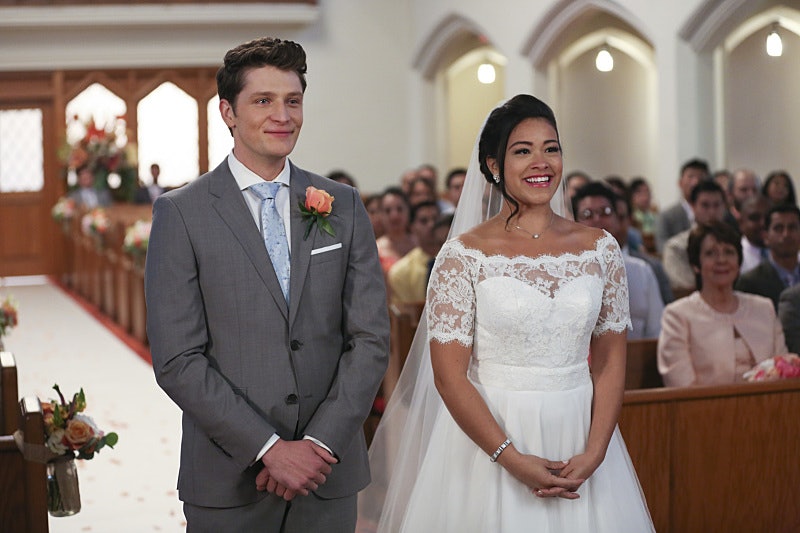 Odds are many of you aren't quite yet over that shocking cliffhanger from the Jane the Virgin Season 2 finale, which found Michael suffering from a gunshot wound that could turn out to be fatal. However, death isn't the only possible downfall from this tragic incident. Brett Dier told Bustle via email that he thinks even if Michael is alive in Jane the Virgin Season 3, his storyline could take a very dark turn moving forward.

"If Michael survives it could go two ways," the actor tells Bustle of where he thinks his character could go next. "Knowing Michael, I think it will cause him to be more appreciative of life. Not to take a moment for granted and to love EVEN more than he loved before. And Michael is already a lover to begin with. OR, being a telenovela, he could develop Post Traumatic Stress Disorder and have to deal with that. These are just ideas, obviously. I know just as much as you."

Naturally, we'd all like to think that Michael will make a fast recovery and go back to being happily married to Jane as soon as possible. But Dier raises a very important point. Even if Michael does survive — and that, unfortunately, is a very big "if" — recovering from his physical wounds would only be half the battle. He was betrayed by someone he had come to fully trust, so that's bound to have some serious side effects.

But, of course, Dier makes it clear that "these are just ideas" and he actually has no idea how Michael's storyline will play out come Season 3. That being said, tackling PTSD could be a great move for the writers to make. Jane the Virgin has never shied away from tackling sensitive topics, from Petra's struggle with postpartum depression to parental custody issues and everything in-between. The show does a fantastic job of opening up a dialogue and bringing important issues to the surface. So watching Michael attempt to deal with the after effects of what happened to him doesn't just seem possible, but also highly probable.

It would be very hard to watch Michael struggle with something so difficult. But I think we can all agree that having a different, more conflicted version of Michael in Jane the Virgin Season 3 would certainly be better than not having him at all.