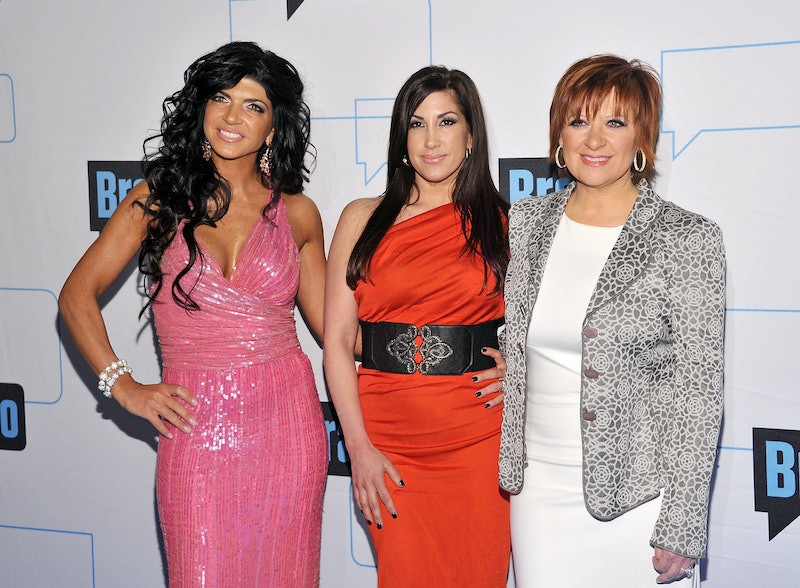 It's a Real Housewives miracle! Bravo fans might not believe it, but Real Housewives of New Jersey stars Teresa Giudice and Jacqueline Laurita are friends again. Break out the Fabellini, because this calls for a celebration. As exciting as this news is, it's not all sunshine and roses. Per Jacqueline, who dished about her current friendship status with Teresa to The Daily Dish at a party for Teresa's new memoir, they aren't as close as they once were and are still working on their relationship, but things are much more positive than what RHONJ fans remember.

"It's going really well," Jacqueline said about their friendship. "We're working on repairing, rebuilding our friendship, and it seems to be going really well." She added about attending Teresa's book celebration and supporting her friend, "I'm here tonight, right? I'm very proud of her, and I think she's a very strong person, a strong woman. I just wish her well."

For those wondering, yes, Jacqueline even visited Teresa after she was released from prison. She said of her visit, "Surprisingly, it felt like old times. It felt like seeing somebody alive after a war. It felt more comfortable than I thought it was gonna be." They even took the time to clear up where they stood as friends and appear to now be working on moving in a better direction.

All that said, it sounds like RHONJ Season 7, which will feature Teresa, Jacqueline, and Melissa Gorga, will see some "very fiery" moments between the two friends, per Andy Cohen. Even Jacqueline admitted that their road to putting their friendship back together hasn't been completely smooth. She dished,

It's been a roller coaster at times, but we're trying to get back on track and stay on track because there's a history there, you fight harder. It has more meaning when you have history. It's like when you have family. I feel like she was my sister, and we've had falling outs. It's like the work we're both putting in trying to repair the damage that's been done. And so it's not always easy.

Despite the tough times they are still experiencing as friends, Jacqueline isn't letting it get her down. "I think anything's possible if two people are willing to put in the work and it's a sincere effort, then it works," she said. "It can't be one-sided."

Well, it sure sounds like Season 7 is going to feature a lot of Teresa and Jacqueline, which will probably make those who have been fans since Season 1 happy. It almost seems that RHONJ is getting back to its roots, and it's about time. Jacqueline even described the upcoming season, which is slated to air in summer 2016, as "very deep, it's funny, it's emotional, it's heartwarming."

All I have to say is, get ready for a new and different RHONJ, because what Jacqueline described sounds nothing like previous seasons.