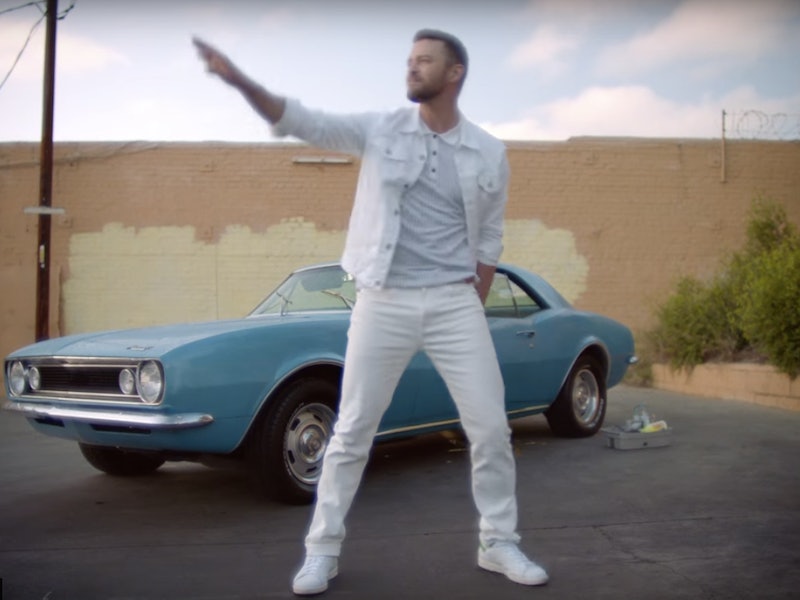 It might have been the second time this news happened, but that didn't stop people from being enthusiastic about it. Justin Timberlake's "Can't Stop The Feeling" music video dropped, or, rather, his second video for the potential song of the summer dropped after the first, celebrity-filled one. Seriously, people went nuts. And it's easy to see why; the visuals are every bit as sunny and feel-good as the Trolls soundtrack song itself. Entertainment Weekly recently interviewed the video's director, Mark Romanek, to ask him exactly what it was like working with Timberlake and how he found inspiration for the video, to which he replied, "In L.A., I drive by those huge strip malls all the time and always thought, what if you just went down the strip and shot one scene in each of the businesses; a Chinese restaurant and a shoe store and a nail salon and a pizza place and a tax place?"

This is essentially the spirit which informs the video: it's an unabashed celebration of the joy of the everyday. And this, Romanek argues, is what's so special about the video and the song itself. Which, admittedly, isn't something that we couldn't figure out for ourselves just from listening to the uplifting song or watching the uplifting video, but it's nice to know that those feel-good feels were intentional.

When asked what aspect of the video he was most proud of, Romanek responded, "Just the overall feeling of unironic and sincere humanism. It’s not trying to be cool or slick or ironic. It’s just fun. Most of the time, people are excellent. It’s just a big sugar cookie. It makes people smile for four minutes. That’s nice." For me, this isn't just about the video; this nails the universal appeal of the song itself. It's not complicated or intellectual. It's feel-good without any sort of shame about that. The song says maybe I don't have to be clever or funny or weird. Maybe it's OK to just throw together some really, really catchy major chord harmonies and some silly, fun lyrics for people to dance to.

The credits in the last 40 seconds of the video seem to play into this: we're given the names of the non-Justin Timberlake dancers who took part in the video, elevating these people who dance like you or me or that one friend who really knows how to shake it to the status of superstars. "A big sugar cookie" is dead on. "Can't Stop That Feeling" is sweet without being sickly and isn't ashamed of it. What more do you need in a summer jam?