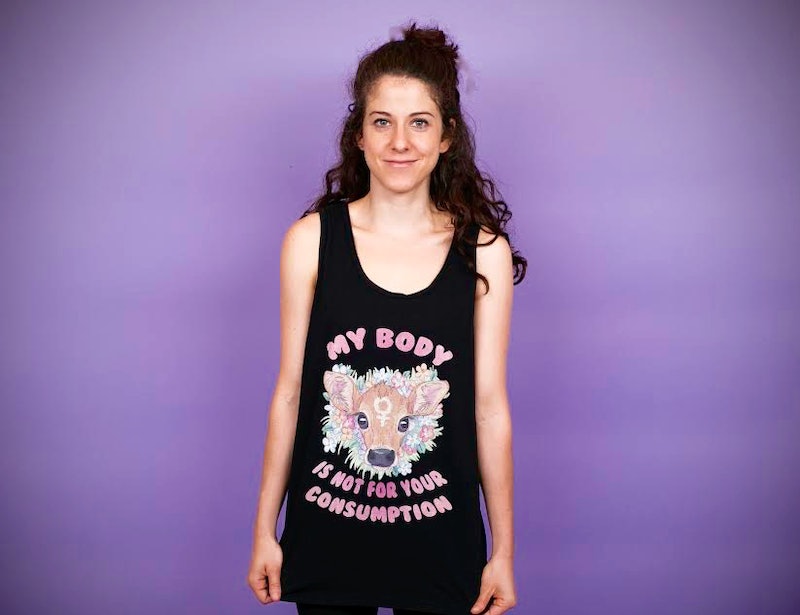 When I tell people I'm vegan, a lot of the time, they say something along the lines of, "That must be so hard! I could never give up cheese! But good for you." In truth, giving up cheese was the easiest part. As I've written about before, once I watched Earthlings and saw the immense suffering behind how cheese is made, it and all other animal products ceased to become appetizing to me. Abstaining from eating them, especially when there are so many good dairy alternatives out there, is anything but difficult. What has been hard mostly has to do with interacting with meat eaters.

When I tried to explain the feeling of disconnect recently to my ex (who is still a carnivore), he said, "It sounds like you've had an experience of going through The Matrix. And now you just can't see anything the same." That's kind of what it feels like. To have my own perception change so dramatically over the course of just a couple years feels odd. It's like I stepped through some forcefield, and most of the people I know are still on the side I was for my whole life, and nobody seems to care.

It's been a strange paradigm shift, and one that's affected my life in ways I never expected. So, no, giving up cheese is not hard. But these six things often are.

1. Knowing People Are Judging Me The Way I Used To Judge Vegans

I used to judge vegans as extremist hipsters or "animal rights nuts" who probably cared more about chickens than people. I thought that they believed they were better than me, and were self-righteous, or at the very least, denying their own humanity. There was something so "natural" about celebrating an achievement with a glass of red wine and a steak. It made me feel like a human; dominant and powerful. As my partner Jacob put it in a letter to his family and friends about his long journey to veganism,

Not only did I eat other animals, but I was suspicious of people who didn’t. Forfeiting a steak seemed idiotic and a confused expression of compassion ...

Then there was the cameo I played in an incident during college when two guys in the dorm found out that my friend Prashant was vegetarian. They made him a wager. If they could survive two weeks on his diet, he had to survive one evening on theirs. He accepted, probably having calculated the number of animals saved and the possibility that Dave and Nick might see the ease and benefit of half a month on plants. Wager concluded, a group of us huddled around a table at Johnny Rocket’s to witness the vegetarian eat a burger. After his first bite they goaded him, ‘Come on, man. Isn’t that good? You know you like it.’ I hear us in my memory and wonder why were we being jerks to this kid who was plainly trying to be a kind person. Why did we care about this one nerd’s food? All I knew was that vegetarians made about as much sense as celibacy. Giving up one of life’s most consistent pleasures seemed unimaginable, even wrong.

I used to judge vegans that way too. But now that I am one, I know that the vast majority of us are simply trying to do the right thing. We're being called weirdos and extremists, just like all activists who fight for the rights of marginalized groups have always been called unreasonable before their movement became normalized.

2. Trying To Strike A Balance Between Advocacy & Seeming Evangelical

Because of this self-consciousness about seeming "extreme," many vegans actually err on the side of biting their tongues when they probably shouldn't, for fear of seeming like "that person" or making people uncomfortable.

But because being vegan has made such a difference in my life, I want to share how it's changed everything about my health and morality, and I often do. When it comes to family and friends, especially, it's tempting to go on a rant about how a vegan diet would help the health problems they're complaining about, or their sense of frustration about how messed up the world is.

I know that everyone hates a preachy vegan, but I also know that if even vegans are afraid to speak up for the billions of animals in captivity who are killed every year, that likely no one will. So I try to strike a deliberate, calculated balance, knowing when to bring it up, and when to let people get there on their own. I usually wait until someone asks me a question about my diet, and share my experience. But sometimes, I can't help but suggest it to the people I really care about, because I love them, and to me, this is all about believing in the contagious power of love.

3. Being Seen As Extreme For Giving A Sh*t, Even Among Vegetarians

Recently, I went to a fancy event hosted by a vegetarian food brand, and there was only one vegan option out of about nine appetizers. Even among vegetarians, vegans can feel on the outside, like extremists. While vegans are simply taking the idea of not harming animals to it's logical conclusion — not only believing in not eating flesh, but also animal products made under conditions of extreme suffering, enslavement, and torture, that ultimately also result in death — somehow we're the weird ones.

I'm sure this is how vegetarians felt a few decades ago, when their stance was far less normalized and accepted. I can only hope the same thing happens with veganism in the future.

This is something I never even thought about before. I used to walk by the packaged raw flesh in grocery stores like it was just more scenery. Sure, I thought chickens hanging in windows in Chinatown were kind of gross, but it was just a dead chicken.

Now that I've taken the time to meet chickens and cows at sanctuaries, to look into their eyes and see the common consciousness and will to live we share as sentient beings, all I can seem to see as I move through the world these days is normalized and socially-sanctioned murder. I see murder sterilized and packaged, and I try to avert my eyes because, for lack of a better word, it is now triggering. Sometimes I'll smell meat frying at a Halal cart and want to cry. It seems that everywhere I look, there are dead animals or the results of their suffering. At work, people sometimes bring raw flesh and cook it for parties, and I feel I can't say anything about how uncomfortable it makes me, though maybe I should. It's a very isolating feeling. I never used to care or notice, and now I feel sad, multiple times a day.

But I'm glad I feel sad. It's like when I meditate, and suddenly notice all the homeless people, or other suffering around me with more acuity. Consciousness and compassion is better than numbness, even if it is sometimes painful.

5. Knowing What To Think Of The Term "Plant-Based Diet"

The term plant-based diet has been catching on lately, largely as a sort of attempt to rebrand the image problem that veganism has. "Plant-based" takes veganism out of the realm of animal rights and tries to appeal to the health-conscious people who would like to lose weight or live a healthier lifestyle.

On the one hand, I think this is a great development. If it gets more people to stop consuming animals, then what's the problem? Well, I suppose that they might not see the bigger picture. For example, when I sent my mom the film Forks Over Knives , which uses the term "plant-based" and never really mentions veganism or animals, she commented that it reaffirmed for her that her diet is healthy because she "mostly eats a plant-based diet already." While it's true, my mom does still sometimes eat animals and animal products. But the term plant-based diet allows her to think she's already there.

On the other hand, I think that getting a "plant-based diet" to be the new "gluten free" craze is the only way veganism will truly catch on, because people are inherently self-interested. But knowing that veganism is about so much more than just health — that it is a philosophy about attempting to live without furthering the cycle of suffering and domination that permeates everything in our society — I can't help but feel the term white-washes the truth, even if the ends do justify the means in this case.

6. Seeing The People I Care About Most Do Something I Don't Believe In

This is probably the hardest thing about being vegan. Many people assume that when you're vegan you think you're better than other people. I certainly don't; I was a flesh-eater just a year and a half ago myself. But now that I've seen The Matrix, so to speak, it's difficult to watch the people I care about most continue to do something that I now really, really don't believe in. That doesn't mean, however, that I judge them. Again, I think Jacob does a good job in his letter explaining the feeling:

I understand that some people feel judged by my position. But the irony of my past self is not lost on my current self. And though of course it upsets me that people, particularly those I care about, go on treating other animals as unfeeling objects and claiming that their objectification and murder is a matter of ‘personal choice,’ the irony keeps me from standing in judgment. How could I, when for about three decades I regularly dismissed other animals’ lives as less important than the taste of their bodies? I also fully understand the fear of missing out on certain comfort foods, or of being different or weird. Those fears were mine, too.

I totally understand where my friends and family are coming from when they consume animals, because I've been there. I don't judge them, but I'd be lying if I said it didn't cause me pain to witness them continue to consume suffering when I now know there is another way to live, a way I believe would make them feel better. I love them, and every time I watch them choose to do something I fundamentally don't believe in, something I believe is also hurting their health, it does hurt. But no, I don't judge them. I just feel lonely, and hope that one day, they'll join me on the other side of cynicism, and choose compassion.

Some names in this story have been amended to protect the privacy of those mentioned.