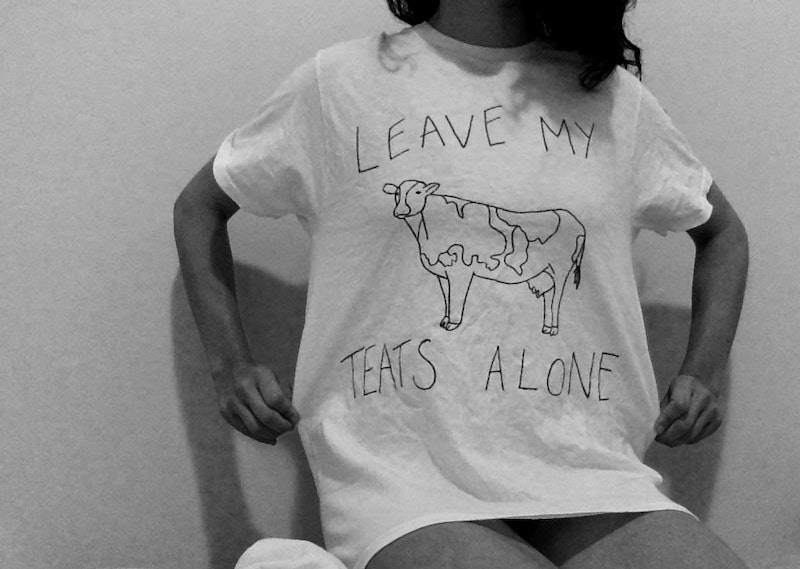 To my own surprise, I stopped eating dairy all at once, in one night. I'd been a vegetarian for several months when I watched the documentary Earthlings, which shows graphic footage of the many ways animals are exploited for food, clothing, and entertainment. I had no real idea about the amount of suffering that was going into my Half & Half, and when the film finished, I turned to my boyfriend and said, "We can't do this anymore. Or at least, I can't participate in this." He agreed, and we've both been vegan ever since.

The decision was a moral one. As a feminist, I couldn't unsee the footage of female cows being forcibly impregnated and milked until they died, every one of their babies taken from them as they cried. What I didn't realize that night was that making the choice to give up dairy, and all other animal products, would also have numerous effects on my health, both physically and mentally.

Now, nearly a year later, I feel compelled to share just how much giving up dairy in particular has changed my life for the better. Keep in mind that these are the changes that stand out to me most after a year, but I did notice them only a month in.

While my reasons for giving up dairy were moral rather than health-related, I have to admit that if someone had told me this would happen, I would have gone vegan a long time ago. For years, I struggled with chronic bloating and constipation. I tried giving up gluten for several years to fix it, and to be honest, that didn't do much but mess with my eating habits and make me feel hungry all the time. But when I stopped eating dairy, I began to notice that I was basically never bloated — even after a large meal. The only time I ever get the sensation now is right around my period, but being vegan seems to have greatly mitigated that as well.

My experience is not uncommon. Dairy is one of the hardest foods for our bodies to process, and most of us are far more lactose intolerant than we realize. An astonishing three-quarters of people actually lack the enzyme to properly digest cow's milk. An estimated 98 percent of Southeast Asians, 90 percent of Asian-Americans, 74 percent of Native Americans, 70 percent of African-Americans, and the majority of Jewish, Latino, and Indian people suffer from lactose intolerance. I had no idea I was one of them until I felt a total absence of bloating in my life.

2. My Digestion Became Amazing And Regular

Similarly, ever since I stopped eating dairy, my bowel movements rock. Like I said, I had frequent constipation when I was eating dairy and meat, something I'd chalked up to gluten for years, even though cutting it out hadn't really fixed the problem. But once I gave up dairy, I began to have regular, satisfying BMs every morning. Now, the only time I ever get constipated is if I'm traveling, or right before my period — and sometimes, not even then. Again, apparently, this benefit of giving up dairy is nothing uncommon.

3. I Felt Satiated Instead Of Stuffed Or Hungry After Meals

It's very strange, but I almost never feel stuffed after eating now, yet I almost always feel full. I'm guessing that this is because I'm eating foods my body can process more easily, and because I'm probably filling up my belly with more high-fiber grains and vegetables instead of consuming smaller amounts of high-calorie dairy or meat, which might have left me feeling stuffed but still unfulfilled. Now, when I eat, I feel satisfied, refueled, and light all at once. I can almost always tell exactly when I'm actually full or hungry. It's like I finally feel the way eating is supposed to make you feel, and it's nothing short of awesome.

A few months into giving up dairy, people started commenting on my skin. I've always had pretty nice skin, so I was surprised that anyone noticed a difference. It wasn't like I had dramatic acne to clear up — but people seemed to notice I was "glowing" anyway. "What product are you using?" more than one person asked me. "Veganism," I always replied.

I guess I shouldn't have been surprised. Dairy products are one of the leading causes of acne, according to a review published in a 2013 issue of the Journal of the Academy of Nutrition and Dietetics. Researchers examined the link between acne and diet, and have found that certain products, especially cow’s milk, produce and stimulate hormones linked with acne. This study supports previous findings from the Harvard School of Public Health and lots of other studies linking dairy and acne. It's not like I was even drinking much cow's milk, besides using a dash of Half & Half once a day and eating some ice cream. But I guess eliminating that and cheese still made a noticeable difference.

5. I Began To Feel More At Home In My Body

I'm not trying to lose weight (though yes, I have lost a few pounds since giving up dairy anyway, which is very common). What I'm referring to here, however, is not losing weight, but a feeling. I just feel lighter and more comfortable all the time. When I eat a big meal, I never feel weighed down, bloated, or stuffed by my food. When I move through my day with awesome BMs and a lack of bloating, I just feel at home and free in my body.

There's also a newfound moral lightness. Because I'm no longer participating in a system I don't believe in, I feel a sense of relief and gratitude every day when I realize I don't have to opt into it. I wasn't even conscious that it had been a burden until it was lifted. I've genuinely never felt this consistently happy or empowered.

When I made the decision to stop eating dairy, I knew it was the right one, but I dreaded not having cream in my coffee, or pizza. I remembered how, when I'd tried eliminating gluten for my digestive issues a few years before, it had been absolute torture every time I saw a bagel. I was worried that I was now in for the same feeling all the time.

I was pleasantly surprised when this wasn't the case — like, at all. I think it was because I didn't give up dairy for dietary reasons. Studies show that vegans who choose the diet for only their health have a higher relapse rate than those who are vegan for moral reasons. When you genuinely change your association with these foods, usually by watching a video of how animal products are made, they actually cease to become appetizing. You're not abstaining to lose weight or stay fit — you're abstaining because it morally disgusts you to exploit or kill other living beings for personal pleasure. And that makes sticking to it easy.

When someone brings out a plate of cheese now, I sincerely don't feel deprived or crave it. It's almost as if I don't even see it as food anymore — just suffering. I saw how the sausage is made, so to speak, and it repulsed me. I don't miss any foods, as impossible as that might seem if you're still eating them. If you don't believe me, I suggest you watch the (not gory) video above and see if your thoughts change at all.

7. I Started To Enjoy And Appreciate Food More

If you had told me that I would try more new foods and restaurants than ever as a result of giving up dairy, I wouldn't have believed you. But that's what happened. I'm lucky that I now have an excuse to try a bunch of new vegan restaurants, as well as the many, many vegan products on the market. I might not miss cheese, but that doesn't mean I don't want to support and try the restaurants making delicious vegan pizza!

Artisanal nacho cashew cheese? Coconut milk dark chocolate ice cream and yogurt? Vegan Ethiopian and Korean restaurants? Who knew it would all be so delicious? The list of foods to try goes on and on, and as weird as vegan foods might sound to some, they are rich, flavorful, and have the added bonus of being better for my body.

I have more appreciation for my food than ever, and I feel privileged every day that I'm able to eat such a delicious, varied diet without feeling that I'm denied anything. I feel grateful for my meals all the time, and lucky that I don't have to eat suffering in order to feel satisfied. It's a feeling of true abundance and joy.

8. I Respect My Cravings And Body In A New Way

I'm sure you can give up dairy and end up compensating with too much sugar, unrefined carbs, or salt, but that didn't happen to me. Instead, because I felt more in touch with my body, I could better sense what it was craving, and give those foods to it with love. I feel like I can tell now if my body wants some carbs, some protein, some veggies, or some sugar, and I give it those things without judgment. I feel no need to deprive myself of anything for the sake of my health, because I know that by following a vegan diet, I'm already on what more and more doctors acknowledge is the absolute healthiest track.

Sure, I can't usually eat the pastries in the office now, but every time I go to a vegan restaurant, I order dessert. When I have options to indulge, I feel no need to deny myself in any way. Instead, I feel like I genuinely want to treat myself to whatever I crave. My dietary choices are based in love instead of fear now, and that philosophy has extended to how I feel about my body. I love and appreciate it more than I ever have, and I don't fear feeling sick or "looking bad" the way I used to.

If any of this sounds good to you and you're thinking about giving veganism a try, then please tweet at me. I'd love to support you in any way I can. I'm guessing that seeing what it did for my health might inspire more people than trying to make the ethical argument for giving up dairy and all animal products, but ultimately, compassion is what this is about. All the health benefits are simply the karmic payback. Stop consuming food that is the result of suffering, and as it turns out, your body responds by suffering far less.

More like this
This Company Will Send STI Tests Right To Your Door
By Lexi Inks
How Long Does Leftover Stuffing Last? Here's When To Toss It
By Chelsey Grasso and Alexis Morillo
Pepsi’s Festive Flavour Is Finally Coming To The UK
By Sophie McEvoy
Heinz Just Relaunched A Bean-Tastic '90s Fave
By Sam Ramsden
Get Even More From Bustle — Sign Up For The Newsletter