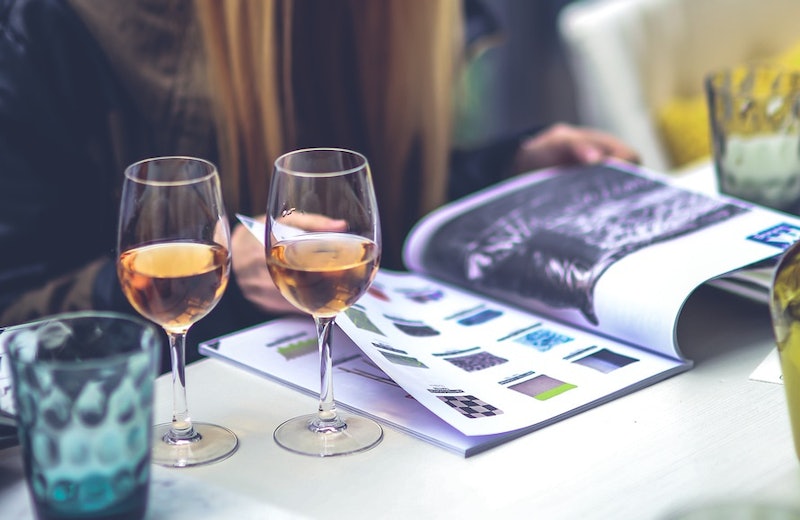 There's absolutely nothing wrong with having a few cocktails, a glass of wine at dinner, or the occasional crazy, drunken weekend with friends. But the innocence of it all can sometimes get out of hand, leaving you to wonder if there's a problem. When that happens, it may be time to look for subtle signs of alcoholism that are easy to to miss.

Because, let's be honest, it really is tough to tell when casual drinking has turned into alcohol abuse, or even alcoholism itself. After all, drinking is supposed to be fun, and many of us hit the bars multiple times a week. So when does it cross into addiction territory, and actually become a serious problem? "This is a question that people come to me asking a lot. One simple answer is that if it is impairing your life in any way, you have a problem," says psychologist Nicole Martinez, Psy.D., LCPC, in an email interview with Bustle.

Alcoholism can rear its ugly head in many ways, and it can creep into your life for a variety of reasons. "Alcoholism is a disease that is often a combination of factors ... people born with a strong family history of addiction have an uphill battle to avoid it themselves. There is also the factor of addiction and what it does to the brain. Taking substances literally alters the brain — the way it functions, the way they think," Martinez says. It's precisely way you may feel the need to come back for more, and more.

But don't worry, while alcoholism and alcohol abuse is incredibly serious, it is possible to get better. Read on for the subtle signs of alcoholism, and be sure to get yourself some help, possibly by reaching out to an organization like Alcoholics Anonymous, if it hits close to home.

1. You Can't Stick To Your Limits

Not sticking to your limits may just equal a fun night out in your mind. But if you do it all the time — drinking four cocktails, instead of the one you planned — it could be a sign of a problem. As Amanda Gardner said on Health.News.com, "If you always try to limit yourself to a certain number of drinks and fail every time, you could be struggling with alcohol."

2. Your Hangover Messes With Your Morning Routine

Waking up with a hangover is not the end of the world. However, it could be a sign that you're kind of going overboard in the drinking department. As Nicole Yorio Jurick noted on Shape, "Any time drinking interrupts your normal routine — whether you miss a workout or forget to set the coffee pot the night before because you were buzzed — is a cause for concern ... Think about if you neglected any responsibilities the past few times you’ve had a drink; if so, it’s time to cut back."

3. You Drink To Relieve Stress

Drinking should be a fun, social thing — not something you turn to in desperation after a hard day. That's because many drinking problems start when people use alcohol to self-soothe and relieve stress, according to an article on HelpGuide.org. So keep an eye on yourself if alcohol is taking the place of more healthy stress-relievers, such as exercise, or hanging out with friends.

4. All Of Your Plans Involve Alcohol

Going to the bar is fun, as is hanging out with friends and sipping on some wine, but take note if drinking seems to be the only pastime you enjoy. "If drinking becomes the center of your social and home life, if you’re the one urging others to order another round, or if you find yourself cutting back on activities that you used to enjoy that don’t involve drinking, you could be in dangerous territory," Gardner said.

5. Being Able To Drink More Than You Used To

Everyone builds up tolerance to alcohol over time. I remember barely being able to finish one tiny drink, and now that seems like nothing to me. And yet an intense tolerance to alcohol (i.e., needing more and more to feel drunk) is definitely something to look out for. According to an article on the addiction treatment website RecoveryRanch.com, "Tolerance is another key sign of addiction ... It means your body is exposed to alcohol regularly enough that it has adapted to cope with it better." And that's definitely not a good sign.

Even if they seam to be joking, you should probably listen to loved ones who point a problem. "Any feedback can be worrisome, especially since other people tend to notice if you’re going overboard before you realize it yourself," Jurick said.

7. You're Having Problems At Work

This one might not seem so subtle, and yet many alcoholics become accustomed to feeling crappy, and therefore are almost immune to ensuing hangovers and arguments. As Martinez says, "Are you missing work? Fighting with those close to you? Then it is problem. Even if you are making it into work, are you functioning at full capacity? If not due to being hungover, there is an issue."

8. You Are Starting To Sneak Alcohol

It might be obvious there's have a problem, and yet you're remaining firmly in the "denial" phase — thus sneaking drinks, and acting shady when it comes to alcohol. "Denial is common with people having problems with alcohol, so both problem drinkers and alcoholics might drink secretively or lie about how much they drink to make it seem like less of an issue," according to RecoveryRanch.com. It's a common and totally normal response, but still a sign that you could use some help.

9. You Are Looking Worse For Wear

Without even getting into alcoholism's long list of negative health effects, let me just address the subtle outward signs of a problem. As Beth Leipholtz said on HuffingtonPost.com, "Some people can drink and not observe the effects physically, but chances are that if you’re a heavy drinker, your body is reacting negatively." Take note if you always look tired, sallow, or haggard. It could be your body trying to tell you something.

10. It's Crossed Your Mind That There's A Problem

Like I said above, alcoholism doesn't go completely unnoticed, to the sufferer, or his or her loved ones. If you've been getting inklings, feelings of guilt, or wake up wondering what happened last night, then it may be time to get some help.

11. Alcohol Is Always On Your Mind

If you are waking up hungover, revolving your plans around drinking, and feeling guilty all the dang time, then alcohol is probably going to be on your mind. But it's even more of a problem if it's on your mind because you're trying to rationalize having a drink. As Martinez says, "It you have to have it, it you have found a reason by 8 a.m. that you deserve a drink when work is over, or when you find yourself preoccupied with thoughts of drinking, there is an issue."

Withdrawal isn't the same thing as a hangover. A hangover occurs due to too much alcohol, while withdrawal happens when there isn't enough alcohol in your system. "If you start to feel irritable, tired, depressed, nauseous or anxious when you haven’t had a drink, there’s a possibility you’re going through withdrawal," noted RecoveryRanch.com. "Other signs include having trouble sleeping, losing your appetite and experiencing shakiness or trembling."

We've all had to apologize for sending drunk texts, or being a bit too rowdy with friends. Constant damage control, however, can get out of hand. As Leipholtz said, "Whether this be finding personal belongings or making apologies to anyone you may have offended, it sucks. It always sucks. And you really don’t realize the immensity of that weight until it is lifted and you can wake up in the morning perfectly able to recall every single action."

Remember, if a few of these signs and symptoms ring true, then it may be time to get help with your drinking problem. It will definitely take a bit of work to get back to normal, but the effort is totally worth it.

More like this
21 Signs You're Not In Love Anymore
By Sara Altschule, Kathleen Ferraro and Carolyn Steber
These 4 Signs Are The Sarcastic Jokesters Of The Zodiac
By Brittany Beringer
10 Ways To Be More Empathetic To Your Partner
By Raven Ishak and Lexi Inks
Think Your Partner Is Cheating? These Tarot Cards May Confirm Your Suspicions
By Kristine Fellizar
Get Even More From Bustle — Sign Up For The Newsletter