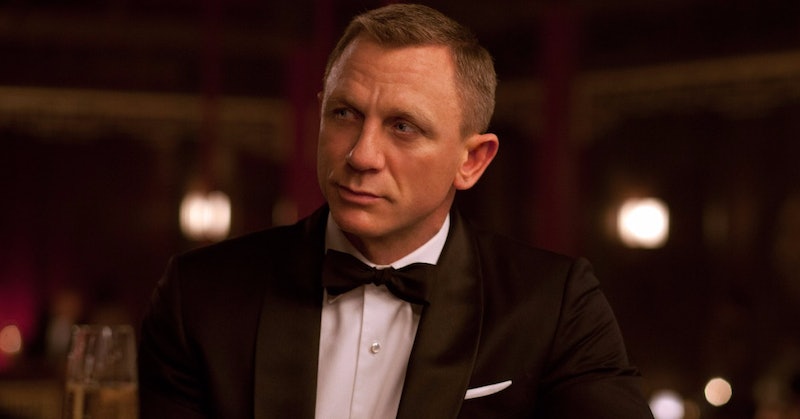 Reports have been circulating for a long time that Daniel Craig won't be returning as James Bond, and they're starting to heat up. According to the Mail Online, Craig has turned down a big money deal to reprise the role of Bond in two further films, turning down as much as "a £68million offer from MGM studio." The studio are obviously keen to woo Craig back with that allegedly huge amount of cash, but, as has been previously stated, the actor appears to be done with the franchise for good. Has Daniel Craig quit the Bond movies? And if so, when should I start my campaign to make Idris Elba the next 007? Is right now too early?

When asked by the Today show in November 2015 about his future with the franchise, Craig gave fans hope when he said, "Maybe I'll make another one, I don't know." But now that sources appear to have confirmed to the Mail Online that Craig will depart Bond, will the franchise go in a new direction? Bustle has reached out to MGM Studios and a representative of Daniel Craig to confirm the news, and all declined to comment.

According to the Evening Standard, "A flurry of bets last weekend meant that Hiddleston is now the 2-1 favorite to replace Craig, ahead of previous frontrunners Idris Elba and Damian Lewis," in future James Bond films. Judging by the media attention he's been receiving lately, it certainly feels like Hiddleston is the current frontrunner for the job, if Craig has truly left the franchise. The Night Manager actor has managed to avoid properly answering the question of whether he might be the next James Bond, and has stated in interviews that he's not been asked to take on the role, going so far as to state, "I haven’t spoken to anyone who makes those films. It’s just an idea in people’s minds."

Hiddleston is lovely, but I can't help feeling that Elba is the perfect choice to replace Daniel Craig for a number of reasons. With upcoming roles in Stephen King adaptation The Dark Tower, and Star Trek Beyond, Elba is proving to be a formidable actor. As TV detective Luther, the actor was consistently fierce, unhinged, and unpredictable — all great qualities for playing cavalier 007.

Born in London, the actor is the perfect fit to play the British spy, and many of his roles to date have been physically demanding. From playing a former CIA agent in Bastille Day, the captain of Prometheus, to a Drug Kingpin in The Wire, his acting choices are consistently diverse and challenging. Not only does he look fantastic in a suit, which is important for any actor taking on the role of Bond, but he's completely charming too. Plus, the James Bond franchise is often criticized for its sexism and racism, and is long overdue a reboot. He would bring a whole new audience to future Bond films, reinvigorating a franchise that often feels outdated and lacking inclusivity.

While we wait to find out whether Craig is definitely done with playing 007, let's all fantasize about what the world would be like if Elba was the next James Bond. A better place, am I right?