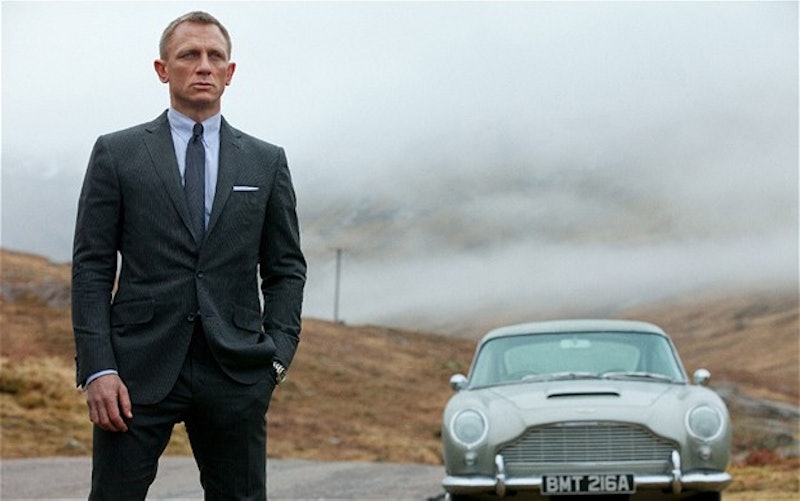 The 24th official Bond movie, Spectre, has arrived, and it may signal a massive turning point for the character of James Bond. That's because it could be the last time that Daniel Craig, who has been Bond for nearly a decade, suits up as the British secret agent. Craig has implied in a number of interviews that he has tired of the character and wishes to move on. While it's certainly not a done deal, and Craig's opinion may change, this is the first time that fans are facing the real prospect of the actor not continuing on with the franchise. So if Spectre really is Daniel Craig's last turn as James Bond, then I think it's time to pay my respects.

Admittedly, I was not on board with Craig's initial casting as Bond. I was part of the very vocal group of Bond fans who thought that Craig didn't look like the character, and therefore shouldn't get a chance to play him. He was short with a non-traditionally handsome face, and he had blond hair. Blond! On James Bond! To me, this was blasphemy, especially since he was taking over from the 007 I grew up with, Pierce Brosnan, who looked like he was genetically engineered to play the part. Then when I heard that Craig's first film, Casino Royale, would reboot the character in modern times and abandon his Cold War background, I was incensed. "This is not James Bond," I thought. They were ruining the franchise by trying to compete with Jason Bourne, Christian Bale's Batman, and other grittier, more realistic takes on action film heroes, and stripping Bond of everything that made him what he was. I was angry. But then I saw Casino Royale.

Casino Royale blew me away, and it remains my all-time favorite Bond movie to this day. From the film's black and white intro, where Bond viciously confirms his first two kills to earn double-0 status, to its twist conclusion where Bond loses the love of his life and then immediately seeks revenge, it was clear that Craig was indeed a different type of Bond. This Bond was scary. If I ran into Pierce Brosnan in a dark alley, I'm pretty sure I could handle myself just fine, as he would probably be more concerned with wrinkling his shirt or scuffing his face than anything else. Craig, on the other hand, looks like he could throw me through a brick wall. Not even the original Bond, Sean Connery, in all his brooding masculinity, could match Craig's intimidation factor. He was a brute, a "blunt instrument" as described by Judi Dench's M in Casino Royale. He didn't use gadgets. He didn't doggedly pursue women, He didn't crack zippy one-liners. He was a morose killer who took his job very seriously, and he didn't bother messing around with much else. This was not the James Bond I grew up with. This was better. And he was exactly what the franchise needed to compete in the new bleak and dark action films of the mid-2000s.

Not to say that Craig couldn't overdo it with his interpretation of Bond. Quantum of Solace upped the somber tone of Casino Royale to such insane levels that every bit of joy was drained from the film, and it was a big disappointment to fans. In this film, Craig was too cold, too unfeeling, too empty. Driven by revenge but showing no emotion while doing so, Craig made me wonder if Casino Royale was a fluke. Maybe this Bond wasn't the right choice after all. Maybe Craig was going to be another Timothy Dalton and go down as a product of the style of his time, a footnote in the history of Bond.

But then Skyfall came along and erased those fears. If Craig reinvented the character of Bond, then Skyfall reinvented what a Bond movie could be. Although the film brought back some of the series' hallmarks that were missing from Craig's previous entries, like Q and Moneypenny, along with Javier Bardem as a charismatic Bond villain, they practically threw the book out with regards to everything else. Bond girls were largely abandoned, as the spy's main companion in the film was M, and the action was boiled down to its most intimate levels ever. The film was also the most beautiful Bond film of all time, and credit goes to director Sam Mendes for making a Bond movie look like an art film. Through it all, Craig seemed more comfortable in the role more than ever, showing what really made Bond tick perhaps better than any other actor who had ever played the part.

I have yet to see Spectre, but from what I've heard it sounds like it's Mendes' and Craig's attempt at making an old-fashioned Bond film. There are apparently allusions to the series' past throughout, especially to its heyday 1960s roots. It's the most action-packed and exotic locale-focused of Craig's tenure, there are more Bond girls, and the evil SPECTRE is back after over four decades away. It's also said to be funnier than the rest of Craig's movies, and even features a gadget or two. Because of all of this, people aren't quite sure what to make of it. Most reviews have been positive, but there are more mixed ones than I expected. It seems people are confused by a "new" Bond performing the role in an "old" Bond movie. But why shouldn't he be able to?

Craig's Bond has grown into himself over the course of his movies and shown a lot of new sides, so really all he had left to do was inhabit the character in his most classic setting while still bringing to the role everything that made him different. Therefore, it's fitting that his final role as Bond should be in his most Bond-like film. After all, movies like The Avengers and Guardians of the Galaxy have proven that action films don't need to be depressing, moody affairs anymore, so it's OK for James Bond to not take himself so seriously now. I'm just glad that it was Daniel Craig who got to bring that fun old spirit back to Bond for his last time in the role.

That is, if it's his last time in the role.