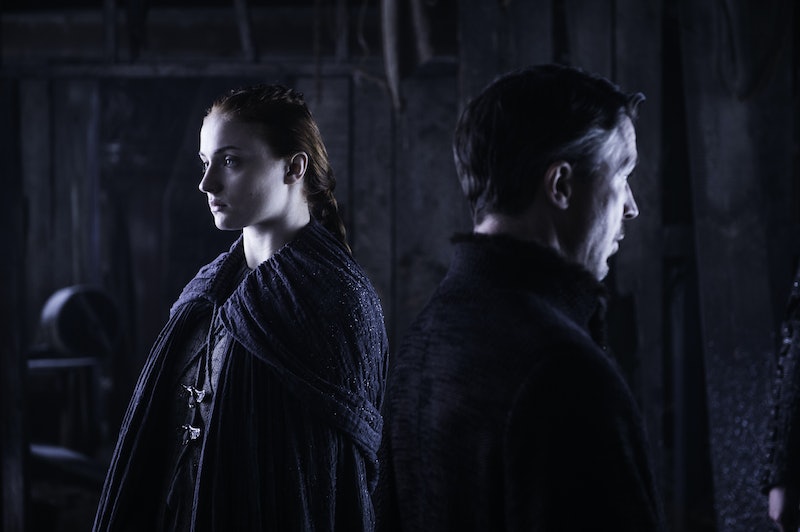 Pop quiz: Who do you think is the most important character on Game Of Thrones ? Not who is your favorite, but who do you actually think will have the biggest impact on the endgame of the series? There are a lot of obvious contenders for this title: Tyrion Lannister, the character with the most point-of-view chapters in George R.R. Martin's A Song Of Ice And Fire series; Jon Snow, the man with the White Walker-killing sword who was just brought back from the dead; Daenerys Targaryen, the lady with the dragons who wants to conquer Westeros. But what if I told you that none of these could hold a candle to GoT's real MVP, Sansa Stark? That's right, Sansa is now officially the most important GoT character.

It all became clear when Jon Snow and Sansa reunited during last Sunday's episode, "The Book Of The Stranger." Between proven warrior Jon and perennial victim Sansa, you might think that the former would be the one to lead the charge against Sansa's evil husband, Ramsay Bolton. But, you'd be wrong. Death has changed Jon, seemingly sapping his will to fight; long years of abuse have also changed Sansa — but they've made her more eager to fight, not less. "If we don't take back the North, we'll never be safe," she told her half-brother last week. "I want you to help me, but I'll do it myself if I have to."

Obviously, if there's one person who's going to be able to forge an alliance between all of the disparate houses of Westeros in order to stand against the inevitable invasion of White Walkers, it's Sansa Stark — Wardeness of the North. That's right, not only is she now a key player in the game of thrones, she might actually become a ruler in her own right. With Robb's death, Sansa is now the eldest remaining Stark; of course, she's not a man, but with Bran off living in a tree beyond the Wall and Rickon more likely than not to come to a nasty end thanks to Ramsay, she's the only one left to carry the banner for her family.

This development is particularly interesting given that the Sansa in Martin's source material isn't in nearly as advantageous a position. That version of Sansa is not in the North plotting revenge against Ramsay; in fact, book-Sansa never married the Bolton bastard at all. She hasn't even left the Vale since being whisked there by Littlefinger, and is still living under the pseudonym of Alayne Stone, Petyr Baelish's bastard daughter. In the book, Littlefinger is plotting to marry Sansa off to the heir to the Vale — but even that development would keep Sansa a bystander in her own story, rather than the active participant that she is on the show.

In fact, George R.R. Martin didn't even consider Sansa one of the five most important characters in his series when he first conceived of it. When he sent a letter to his publisher with his proposed Song Of Ice And Fire outline back in 1993, this was his plan for what was then a trilogy:

Five central characters will make it through all three volumes, however, growing from children to adults and changing the world and themselves in the process. In a sense, my trilogy is almost a generational saga, telling the life stories of these five characters, three men and two women. The five key players are Tyrion Lannister, Daenerys Targaryen, and three of the children of Winterfell, Arya, Bran, and the bastard Jon Snow.

So what role did Sansa play in Martin's original vision? Her contribution to the saga is summed up in one sentence: "Sansa Stark, wed to Joffrey Baratheon, will bear him a son, the heir to the throne, and when the crunch comes she will choose her husband and her child over her parents and siblings, a choice she will later bitterly rue."

Of course, a lot of things have changed since Martin's initial outline: Three books have expanded to seven, Cersei Lannister didn't even exist back then, and he apparently changed his mind about a Jon-Arya-Tyrion love triangle (thank god), just to name a few. But, the fact that Sansa was basically an afterthought in the original draft is fairly telling. While Tyrion, Dany, Arya, Bran, and Jon have all gone off on grand adventures, Sansa has largely remained at the whim of the men around her, currently cooped up in the Vale to be used as a pawn in Littlefinger's schemes.

Sure, book-Sansa has grown wiser and more world-weary over time, but she's nowhere near the independent powerhouse that her counterpart on the show has become. It's impossible to imagine Martin's version of the character plucking up the courage to marshall an army and march on Winterfell with herself in the lead. On Game Of Thrones, Sansa has finally overcome her victimhood to reclaim her personal agency — and that's why it's so gratifying to see that the writers have craftily positioned her as the Most Valuable Player of their show.