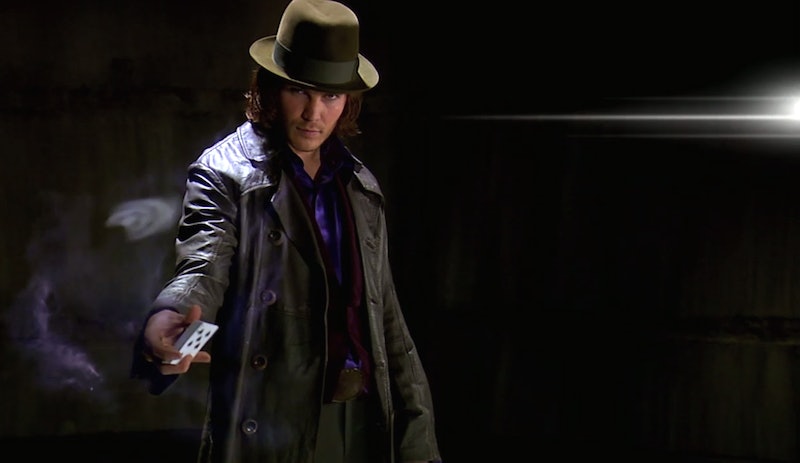 The upcoming release of X-Men: Apocalypse gives you the opportunity to get reacquainted with many of your favorite X-Men mutants, from Mystique to Cyclops to Beast. But since the X-Men universe is so huge, not every character from the comics and previous films will be making it to the big screen this time around. Unfortunately, among the characters who didn't make the cut for the new movie is Gambit, the mutant who was portrayed by Taylor Kitsch in X-Men Origins: Wolverine. It's a bummer that there's no Gambit in X-Men: Apocalypse , but the character's absence from this particular film doesn't mean that his story is done.

It was first confirmed in May 2014 that Gambit would be getting his own spinoff film, and that the star would be none other than Channing Tatum. While this was super exciting news, it made Kitsch fans wonder what happened. In fact, Kitsch revealed to The Daily Beast that he wasn't even offered an audition for the spin-off. Claimed the actor, "No, I didn’t have a go. Ever since we finished the movie, it’s never really been an option." However, he also expressed support for the new project, saying, "I wish [Channing] nothing but the best. It was a fun character to play, and I learned a lot working with Hugh [Jackman] and had an amazing time in Australia. I’m sure they’re doing their own thing with it, and I’m sure Channing will be great." So, even though Gambit isn't in X-Men: Apocalypse, fans can look forward to seeing Tatum bring the character to life in the eventual spinoff.

However, the movie, originally scheduled for an Oct. 6 release, has been pushed back, and no new release date has been announced. Furthermore, Gambit hasn't even started shooting yet. All of this might seem pretty worrisome for the future of the film, but X-Men writer/producer Simon Kinberg confirmed to Flickering Myth that Gambit is still on. Kinberg explained that the production was pushed back due to delays in the writing process, saying, "We’ve got to get the script right. We just didn’t get the script to the place where we all thought the movie deserved. So we’re still working on the script. We’re very close, actually, to being done with the script. And the hope is that Channing has a couple of movies he has to shoot, but that we would shoot at the end of this year, or the beginning of next year."

It's worth noting that Tatum is pretty consistently busy between his movie roles, his production company, and being the parent of a 3-year-old, but hopefully his schedule won't be an obstacle when it finally comes time to film Gambit. Also, Tatum has a vested interest in the new movie, seeing as he will be serving as a producer for it. So even though there have been significant delays in the production process, as of now, Gambit still has the green light.

If you're disappointed that you won't get to see Gambit in X-Men: Apocalypse, take solace in knowing that the law-evading mutant will hit the big screen once again (hopefully sooner than later). And in the meantime, you can enjoy all the other X-Men (along with plenty of action sequences and special effects) of Apocalypse.