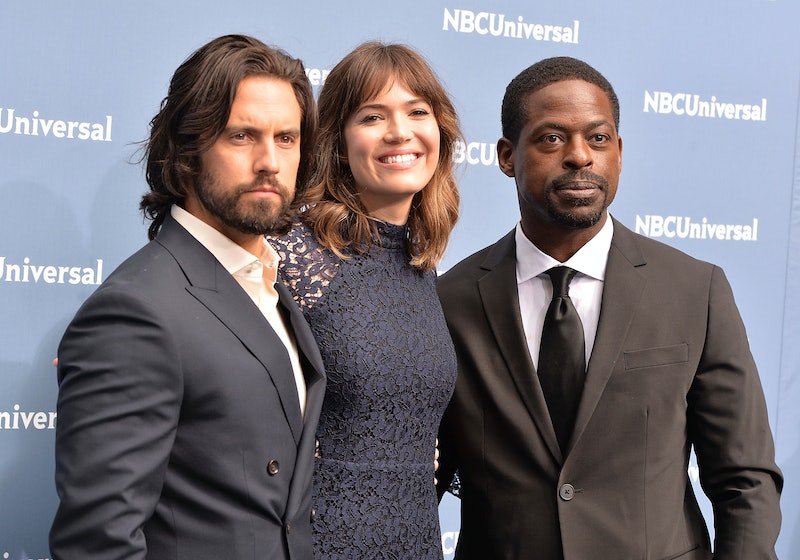 If you have any sort of internet connection and taste, you may have noticed Jess Mariano naked in the trailer for NBC's This Is Us. According to its record-breaking promo, the series is slated to star Milo Ventimiglia as a soon-to-be father, and — get this — Mandy Moore will be playing his heavily pregnant wife. The idea of Gilmore Girls heartthrob and the bubblegum pop "Candy" singer seems so turn-of-the-millennium and wonderful, and you really have to wonder (and hope) if Moore and Ventimiglia are friends in real life.

While it's unclear if the two united at any point at the height of their powers, but there's definitely enough proof that the two have been hanging since they started shooting the pilot. Though Ventimiglia's Instagram is a veritable melange of moody, mostly dual-tone shots (how very Jess of him) and his Twitter has more updates of him with his Gilmore Girls family, Moore has posted about her co-star on plenty of occasions. If nothing else, it seems that the pair have definitely been bonding and joking around. Earlier in the year Moore posted a throwback Thursday about an exhausting day on set, captioned with, "#tbt to yesterday when I pretended to be in labor and sweet, dutiful @miloanthonyventimiglia rubbed my shoulders all day. Our jobs are weird."

But they're not just chilling during the big moments, like pretending to give birth to your TV triplets. Back in January, Moore also posted some playful shots of Ventimiglia decked out in some rugged-looking clothing, asking her loyal social media following, "Vintage or hipster?" This, of course, included a follow-up selfie of the pair (with Moore in an absurd orange sweater and cream colored turtleneck), reiterating, "vintage or hipster pt 2."

And it probably goes without saying that the pair were close at the NBC/Universal Upfronts. Moore posted a shot within a shot (Ventimiglia was taking a selfie) of the duo on the carpet with This Is Us co-star Sterling K. Brown. So while it's too soon to say that Moore and Ventimiglia are besties right now, it certainly seems like they're definitely getting along.

That's probably a good thing too, as This Is Us is slated to throw some challenges at the Ventimiglia and Moore's characters. The dramedy is written by Dan Fogelman, the man behind Crazy, Stupid, Love, and it follows a group of people who happen to share the same birthday. Ventimiglia's Jack is seemingly one of those people (hence the "birthday suit" thing) and it looks like he's about to celebrate a few more birthdays when his wife's water breaks. But complications with her pregnancy follow, and the pair will definitely have to endure a loss together. All signs point to a show that'll tug at your heart strings.

But I personally don't want to get too spoilery (about subject matter that's already in the promo). This Is Us looks like it's primed for the NBC fall line-up, but has yet to solidify a debut date. So if you haven't caught the This Is Us trailer already, feel free to watch it below. It certainly seems that regardless of how Moore and Ventimiglia actually get along in real life, they're going to make a great TV couple.