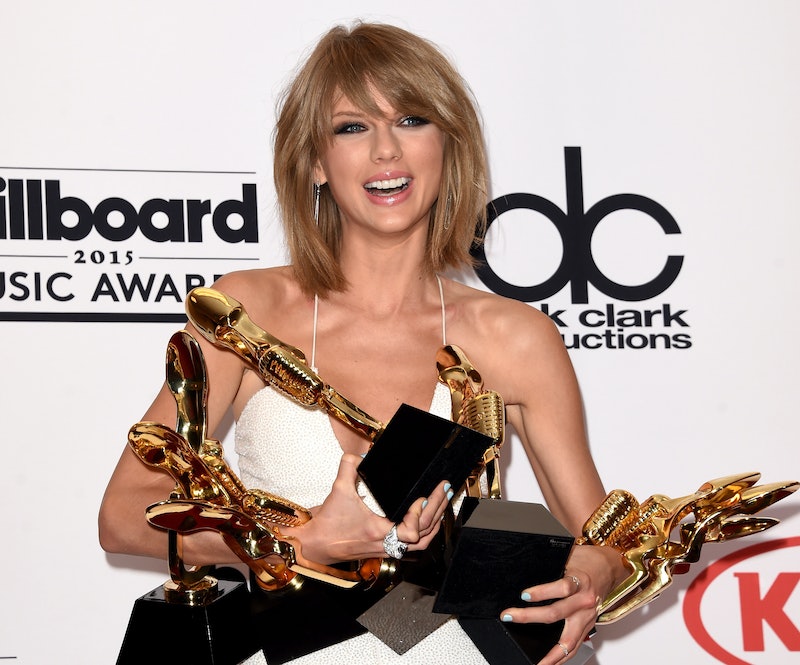 With the 2016 Billboard Music Awards right around the corner, there's one big question. Nope, it's not what everybody's wearing on the red carpet. (Although that's important too.) Instead, the main focus is on who will take home all those trophies. So, how many Billboard Music Awards has Taylor Swift won? In 2015 alone, Swift earned eight awards and made history as the artist to win the most Billboard Music Awards of all time. In case you're curious how many awards she's won in total, I've created a bar graph with all of the info you need to know.

Since 2009, Swift has been nominated 48 times. Out of those nominations, she has won 22 trophies in total. That's huge — and that number very well may increase on Sunday, May 21. At the same time, there were some years that the award show didn't show her any love. In 2010, she didn't score any nominations — probably because she didn't put out a full-length album in 2009. But don't feel too bad for the 26-year-old; she's consistently gotten at least two nominations every year since.

Over the years, Swift has even gotten the major trophies, like Woman of the Year, Top Female Artist, and Artist of the Year. Tracks like "We Are Never Ever Getting Back Together" won Top Country Song, meanwhile "Shake It Off" took Top Streaming Song. As for the grand totals each year, I've compiled them into the chart below — separated by nominations and wins.

Right now, 2016 remains a mystery. Will she be victorious once again? She sure does have quite the track record, but I guess Swifties will just have to wait and see what happens.