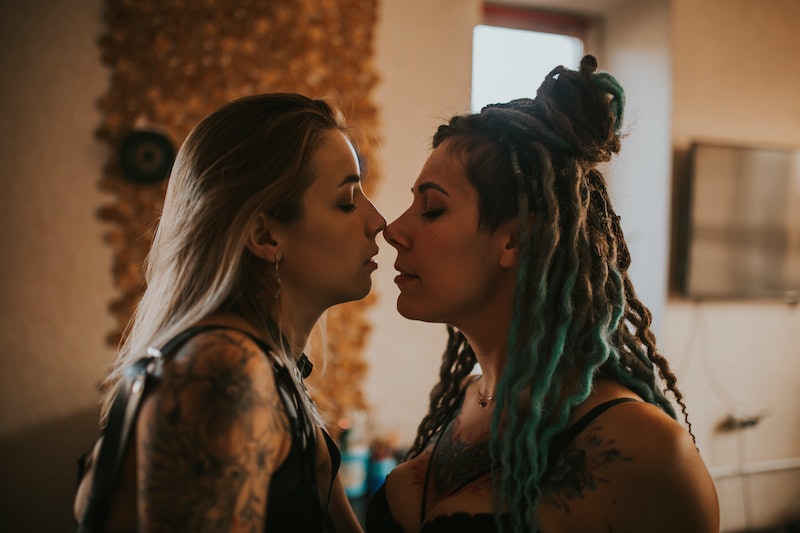 Because my relationships are poly and I spend a lot of my free time organizing poly get-togethers and meetups, my social circle is filled with a TON of other polyamorous people — to the point where I often forget that a large majority of people are, in fact, monogamous...if only ostensibly, in some cases (you know who you are). Sometimes when I'm chatting with my friends who identify as monogamous, I'll make a casual remark about my relationship that seems to surprise them, and that’s when I remember: poly couples are not the norm and can seem kind of weird to most people.

Of course, all couples have their idiosyncrasies, but poly couples have their own unique set of weird quirks that come with the non-monogamous territory. Curious what it's like to be part of a poly couple? Here are six things you didn't know about poly couples that can give you a good view into our world, from how we may wingman for each other to how we may not be dating anyone else at the moment. In this case, when I say “couple”, I mean any pair of people who are romantically or sexually involved (but more on that later).

1. We May Not Consider Ourselves A "Couple"

Some people who consider themselves life partners may not think of themselves as part of a couple, even if they look that way to outsiders. "Couple" is often a label applied to two people, while "partner" is generally a mutual understanding between two (or more!) people.

As Josh, a member of my local poly community, puts it, it's "when you know you want to spend the rest of your life with someone, but desperately hope you receive separate invitations to a party."

2. We May Not Have A Sexual Relationship...

There were years that I wasn’t sexual with one of my long-term partners, for various reasons — but that didn't mean they weren't important to me, or that our relationship wasn’t romantic still. While it's not specific to poly relationships (think long-term marriages), it seems to be more common and more openly acknowledged, and seems less likely to lead to unhappiness or separation as people don't rely on only one partner to meet their needs. It could be because one partner is asexual, or it could be just the kind of relationship those individuals want together, or it could be due to circumstances like illness or distance, but no matter what reason, it doesn't make the relationship any less valid.

4. We May Not Be Dating Anyone Else At The Moment

4. We May Tease Each Other More Effectively

5. We Sometimes Wingman For Each Other

Do you ever go out with your best friend in hope that they'll be your wingman? That's all well and good, but I've found that the best wingmen are my partners. They know me better than anyone, they really want to see me happy, and they are more than willing to playfully make sure my crush knows I'm available (if not single) and interested.

And if we do date together? We'll both be nervous about farting in front of our date, because we are so over worrying about that with each other.

6. How Long We've Been Together Doesn't Necessarily Mean Anything

Don't take the length of time as indicative of where a couple is at in their journey — they may have been together for 20 years and not live together, and never plan to! And that's one of the benefits of polyamory — it allows for all sorts of interesting arrangements.