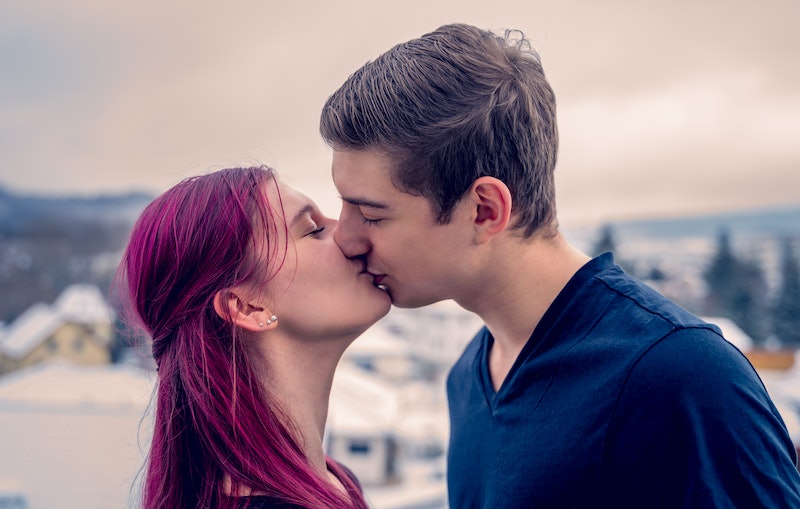 One of the amazing things about polyamory is that there's no template for relationships. While the media usually emphasizes hierarchical-poly couples, not everyone who is poly is one half of a pair. There are plenty of solo-polys (people who consider themselves their primary partner), single poly folk, and on the other end of things, people who are part of triads and quads. However, being part of a poly couple — whether you think of yourself as such or are just seen that way by outside observers — comes with its own unique set of myths and reactions.

People can usually justify single poly folk in their head as "just dating around." Trying to wrap their head around the idea that maybe, just maybe the message they've heard their whole lives — that sexual exclusivity is necessary for a relationship — isn't necessarily the case can take a bit of time, and often leads to people saying some pretty inappropriate things. While some of the things people say are just amusingly uninformed, others are rooted in more harmful myths and standards. Either way, it can be exhausting to hear the same things every time you come out, so here are 15 things that people actually say to poly couples that I'd love to never hear again. But first, check out the latest episode of Bustle's Sex and Relationships podcast, I Want It That Way:

No, no, no, and NO. Like mono folk, poly people have different preferences when it comes to group sex and while some couples are down for a guest star in the bedroom, others find it entirely off-putting. Also, presumptuous much?

Um, maybe ask them? It’s pretty insulting when you ask me to kiss or have sex with my partner before you’ve even figured out if they’re interested in you. While an honest check in about boundaries is great, my permission isn't necessary — their's is. I've mostly found that it's mostly men, whether gay or straight, that do this. I'm not sure if it's rooted in our tradition of men asking for a hand in marriage or what, but it totally misses the point that personal agency and the idea that we don't control each other's bodies is pretty key to many people's poly. If I find out anyone approached my partner this way about me, it's an automatic red flag.

4. "I believe that if you're happy in a relationship, you don't have space in your heart for somebody else."

Good for you. I clearly don't agree, but thanks for implying I'm not happy with my partner(s). Also, do you just stop having family and friends when you date, or do you still have room for them in your heart?

Uh, no. Because poly isn't actually about sex. Remember: poly = many, amory = love, and asexuals exist.

Thanks for sharing? I didn't realize I'd suggested you should. Sometimes this is said just conversationally, which is fine — but mostly it's said with a lot of implied judgement.

8. "Why did you get married if you’re just going to cheat on each other?”

9. “Aren't you worried your partner is going to leave you for someone else?”

Not anymore than I would be if I were mono, and actually, less so — because my partner doesn't have to leave me to pursue their new interest. Besides, many non-monogamous couples find that opening their relationship makes it stronger.

Yup. Again, we're not some monolithic group: just like mono folk, poly people are prone to different levels of jealousy. We're all human, and jealousy is part of our emotional range. Poly folk just tend to choose to respond to it differently.

What about them? Plenty of poly folk have kids, and lots of others don't. Personally, I don't want kids — but if I ever did, I'd much rather raise them as part of a poly network then with just two parents, because I'm totally in the "it takes a village" school of thought.

12. "You guys must have a lot of threesomes/orgies!"

Just like mono couples, some poly folk are into group sex, and others aren't.

Or the flipside: "your partner let's you do that?!" I don't let my partners do anything, because they're not children and I'm not their parent, I don't own them, and I have no right to control their body. Also common is dudes congratulating other dudes on their girlfriend "letting" them sleep with other women, as though they're getting away with something. Because: patriarchy and the assumption that dudes want to screw anything that moves.

Or any other come on. If I'm out with my partner, it's rude for you to hit on either of us, whether we're mono or poly. That really should just be common sense.

Where X is a different partner than the one you're physically with, introducing, or talking about. Yes, I do love X. I also love Y. That's sort of the point.