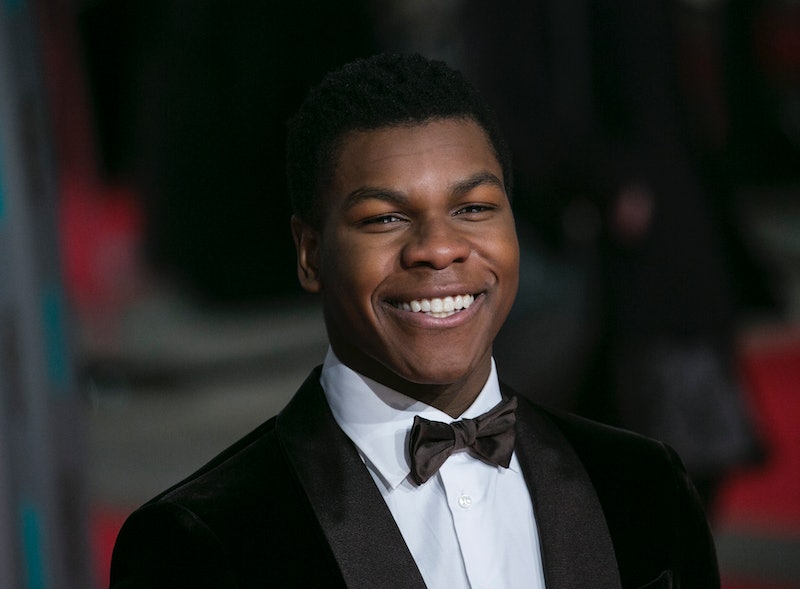 For a film so jam-packed with characters, it's surprising how deftly Black Panther stole the show in Captain America: Civil War from his more established teammates. Thanks largely to Chadwick Boseman's performance as T'Challa, the King of Wakanda, the brand new superhero quickly became a favorite of Marvel fans, and his 2018 solo movie became the topic of many excited conversations. It's not surprising, then, that rumors soon started to swirl about the film — including one that has been gaining traction over the past few days that seems too good to be true: that Star Wars star John Boyega will be in Black Panther . Sadly, The Hollywood Reporter announced that Boyega's reps had reached out to inform them that, "the actor is not and will not be part of the movie."

Boyega, who plays former Stormtrooper Finn in The Force Awakens, would be far from the first high-profile name to join the cast of Black Panther in recent days. It was revealed that Oscar-winning 12 Years A Slave actress Lupita Nyong'o was in talks to sign on as the hero's love interest, and the very next day, Creed star Michael B. Jordan was cast in a potentially villainous role. So why not Boyega as well? It just makes sense.

The rumors started when Heroic Hollywood posted that, "Hot, unconfirmed scuttlebutt is telling me […] Boyega may be meeting for the film." They continued when Boyega apparently snapchatted about a secret meeting he'd had — and Marvel Studios president Kevin Feige followed the actor on Twitter mere minutes later. However, if this casting news somehow seemed too perfect… well, congratulations. You were right.

Boyega's agent also tweeted a statement about the rumor, just raining on everyone's parade even more:

However, just because the rumor isn't true now doesn't mean it can't be in the future. Last month, Feige told Collider that Black Panther wouldn't start filming until "the very beginning of next year," which means that director Ryan Coogler (Creed) has at least eight more months to get Boyega on board before production begins.

It's a move that would make perfect sense. There's already one Star Wars alum in the cast (Nyong'o, who plays the alien pirate Maz Kanata), so why not another? Lucasfilm and Marvel Studios are also both owned by Disney, so surely it wouldn't be too difficult to work out a deal between them. And, like Boseman and Jordan, Boyega is one of the hottest up-and-coming black actors working in Hollywood today. (All three have garnered awards buzz for their performances, Boseman for the James Brown biopic Get On Up, Jordan for both Fruitvale Station and Creed, and Boyega for his acting debut, Attack The Block.)

Adding Boyega to the roster of this movie would just complete the perfection that is the Black Panther cast list. He may not have met with Feige yet — but you have to think that, after all of these swirling rumors, someone at Marvel Studios has to at least be thinking about reaching out to Boyega. Let's all use the power of the Force to make it happen.