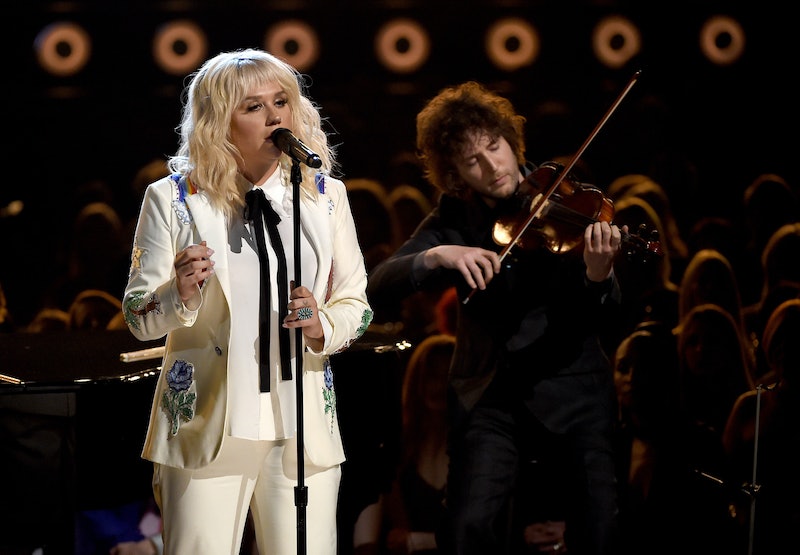 There was a lot of back and forth when to came to whether Kesha's Billboard Music Awards performance would even happen, so regardless of how her performance would go, the fact that she was even there was already a triumph for the singer and her fans. But, being as passionate a performer as she is, Kesha didn't just show up to the BBMAs on Sunday night, she absolutely slayed with a performance of Bob Dylan's "It Ain't Me Babe." While not the statement about Dr. Luke that was rumored in the weeks before the show, the performance was a statement in its own way. Kesha's simple performance showed off her vocals and made clear her value as artist during a time when the future of her career is in question.

For a bit of background, in the week leading up to the Billboard Music Awards, first, a TMZ report claimed that Kesha would be making a statement about Dr. Luke (real name: Lukasz Gottwald) when she took the stage. Soon after, Dick Clark Productions released a statement saying that Kemosabe Records, Dr. Luke's label rescinded its approval of Kesha's performance. Kemosabe confirmed that they did rescind approval after hearing that Kesha was allegedly going to use the stage as a platform to speak out against Dr. Luke, and Kesha confirmed that her performance was cancelled for those reasons via her Instagram. However, the same statement, Kemosabe also gave the singer permission to perform and Kesha then went on to sing the Bob Dylan song she had been planning to do at the BBMAs during a show with accompaniment from Ben Folds.

While many are used Kesha's more over-the-top songs like "Tik Tok" that are filled with autotune, the girl can actually sing really well, and she showed that off on Sunday night. While Kesha is at a standstill when it comes to releasing any new albums, this performance showed that she is a talented artist and that she needs to continue putting out music. She made her value clear on a huge stage at this tough time in her life and that is something that will resonate with her fans, and something that should also make Kesha feel pretty damn good.