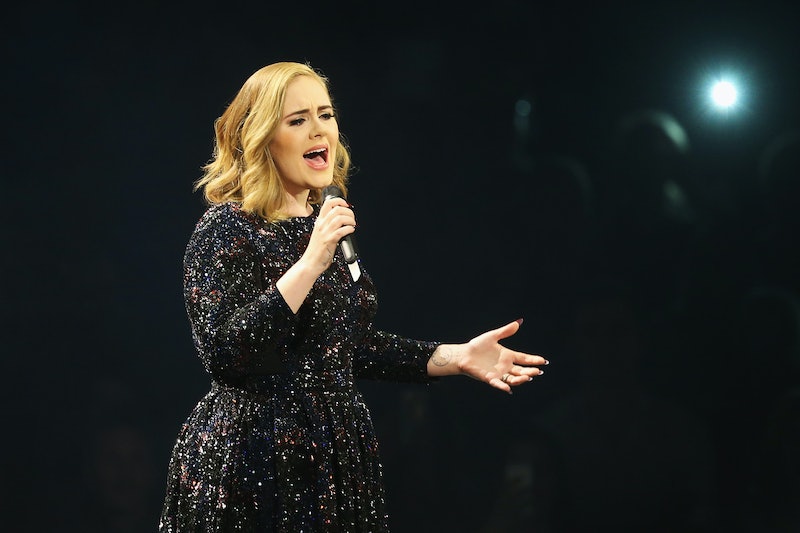 Whether it's really the point of award shows or not, you have to acknowledge the prominence of the red carpet at these sorts of events. Case in point, some people watch strictly to see the stars strut their stuff before the event even airs and tune out directly after. And some merely watch to catch a peak of the stars' significant others, or rumored-to-be beaus. To each his own, you know? What I'm trying to say is, I know that you are wondering if Adele will bring Simon Konecki to the 2016 Billboard Music Awards this Sunday, and perhaps even have him tag along with her on the red carpet.

Well, the answer is no, but only because Adele herself isn't attending. The singer is up for eight awards and is premiering a new video at the event, so you might think that she would be in attendance, but Adele will be on the European leg of her tour and will be in Portugal on Sunday. No Adele, means no Simon Konecki.

When it comes to her personal life, Adele is incredibly low key, especially when it comes to subjecting her family to the public eye, but that doesn't mean she hasn't attending award shows with her love in the past. After all, showing your baby and beau off to paparazzi and bringing them with you to help celebrate your accomplishments are two very different things.

Adele has brought Konecki along as her date to award shows in the past. In fact, just this year, Konecki has been there for her at events like the Grammys and the BRIT awards.

As The Daily Mail reports, at the BRITs, she gave him a heartfelt dedication in her acceptance speech for the Mastercard British Album Of The Year award. Adele said,

I also want to give a massive thank you to my boyfriend, sorry I'm going to embarrass you. I'm so lucky to have you support me as you do... thank you for my lovely son, who is the love of my life. This is for you peanut!

And as if that wasn't enough cuteness for you, the publication also notes out that Konecki mouthed, 'I love you'" back to her.

While Adele and Konecki won't be at the BBMAs this year, I'm sure we can expect plenty of more cute award show moments from them in the future. I just wouldn't expect to see him on the red carpet. That's cool though, I wouldn't want flashing lights all up in my face, either. Attention clearly isn't what this guy is about.

Editor's Note: A previous version of this post did not note that Adele will not be in attendance at the 2016 Billboard Music Awards.