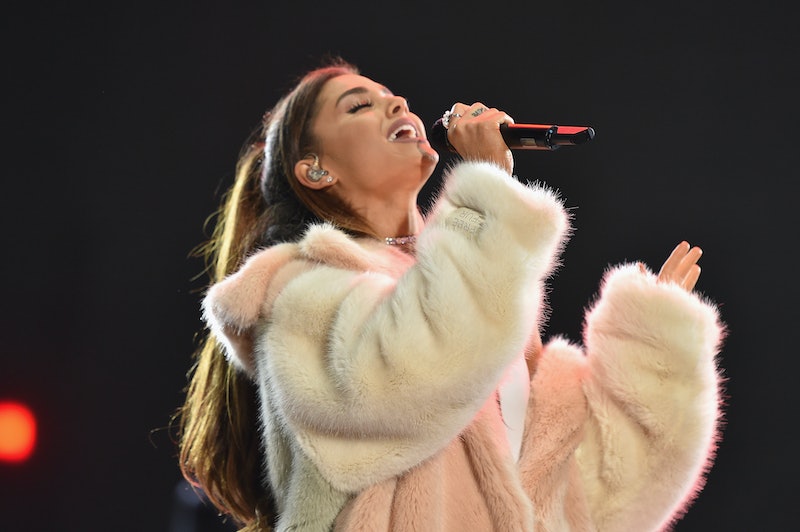 It's been a whirlwind couple of years for Ariana Grande, culminating in the release of Dangerous Woman on Friday. Grande's much-delayed and much-renamed album definitely works to rebrand her in the title's image, and it features a bevy of sultry love songs to heat up your summer. Among that collective is the super sweet "Sometimes." Now, you may be wondering what is Grande's "Sometimes" actually about, but if you listen closely to the lyrics, it really isn't that difficult to decode. Generally, speaking "Sometimes" details the joys of a new relationship (and chances are her current involvement with Ricky Alvarez may be her own personal inspiration.)

The songs start with Grande dispelling all her previous doubts and misconceptions about love. She makes it clear that her previous romantic relationships don't hold a candle to this:

I've never been so caught upStill so into usI never thought I'd be hereShould've turned to dustOoh, let's be honest, babyThis is so unusualOoh, and I'm not tempted, babyEven if they're beautiful

Grande hasn't felt a love like this before, and, based what she's come to expect from her exes, they shouldn't still be going strong. Still, in the bask of this romance, she hasn't been at all swayed by any men (exes or otherwise). "Beautiful" may be a bit of an eyebrow-raising terminology to describe a guy, but it rhymes well, and she gets her point across. Grande is invested in this moment, and leaving the past far behind her. She reasserts this with the following lines:

There's a definite stability here that Grande was lacking before, but it certainly isn't boring. She still gets emotional rushes, but it isn't of fury or sadness, it's a world of positives. It's no surprise that Grande doesn't have any intent of leaving, and she makes that clear in the chorus:

The way things are going right now, Grande can't imagine ending things with her beau. She's not even thinking about what if things go wrong down the line. As far as she's concerns, she's in it for the long haul, she's in it for forever, and that's very clear with the follow-up lyrics:

Cause we're collectin' momentsTattoos on my mind

The "collecting moments" part is sort of just of nod to the nature of modern relationships in general. We all like to keep our Instagrams extra active when we start dating someone new. But "tattoos on my mind" is especially telling, because what's more permanent than a tattoo? Grande wants to make this legit... although, granted, the fact that she's talking tattoos versus wedding rings showcases that recklessness that she claims to have gotten rid of.

In the second verse, we may get another nod to Grande's recklessness. Apparently, it didn't take that much to win her over in the past:

It used to be easyFor someone to steal meNow all my emotionsAre all cause of you, boy

This part's a bit peculiar because of the use of "for someone to steal me." Is Grande alluding to having men "steal" her from relationships when things begin to sour? It makes us think back to the Twitter drama between Grande, and her two respective exes, Jai Brooks, and Nathan Sykes. Brooks publicly accused Grande of cheating on him with Sykes while they were together, so is this a subtle nod to that? Possibly. The point is, Grande is in such a better place right now that she doesn't consider it to be possible.

Grande dissolves into that whirlwind of her emotions with the bridge, where she reaffirms that this relationship is going to be the be-all end-all:

Whether it's intended or not, there is something a bit concerning about "is it love, is it lust, is it fear?" It's the only part of the song where Grande considers that she could just be caught up in the current situation. But her doubts are fleeting and put to sleep, because she's too obsessed with this guy's touch, his kiss, et al.

The main takeaway? Grande isn't just a grown-up woman, she's in a grown-up relationship. And, naturally, we're very happy for her.