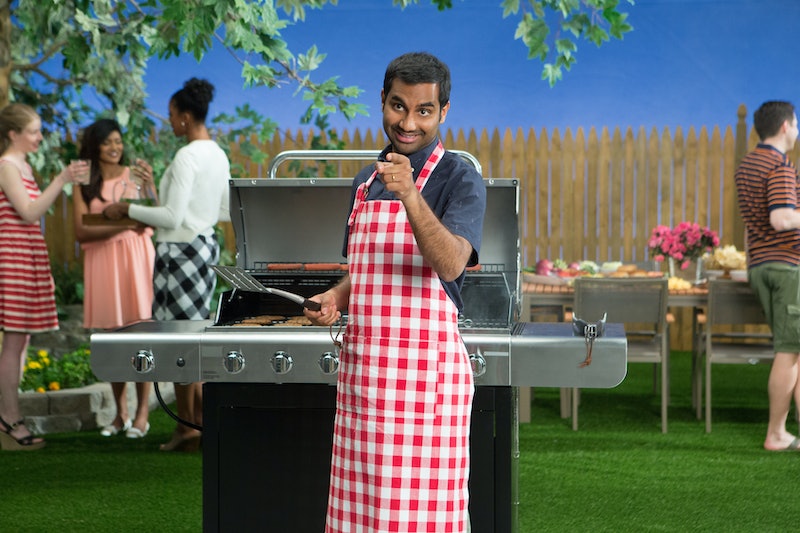 Being a man doesn’t mean swinging from trees, aggressively beating on a bare, buff chest. It doesn’t mean rescuing a damsel in distress or lifting a car with a pinky finger. It means being a human. Only one season into Netflix’s Master of None , the show has already blurred the lines of what it means (at least in society’s eyes) to be a man. Aziz Ansari and his male cast mates play with toys, channel the stereotypical mom role and hang at the playground — and who’s to say they shouldn’t? The show is incredible in the way it challenges societal constructs, and according to one of its creators, it’s not even on purpose.

“I don’t know if it was purposeful,” admits Ansari’s co-creator/writer Alan Yang, who also pulls inspiration from his real life to incorporate into the show. “I just think we’re trying to be honest about how we feel in these situations.” But Yang admits this: “There’s an image of men on TV that I think we’ve seen for a long time: The dad at home who wants to watch football and ignore his wife and kids. That’s like in every beer commercial.” But come on, what century are we in here, people?

We’ve been celebrating a certain kind of manliness for a long time and getting away with it. One thing about Aziz and Alan is that they’re really empathetic. Every time he discovers something women go through, he wants to know more about it and wants to ask questions. The show is really good about doing that. What is it like for a woman to walk home late at night? What is it like for a gay woman to date?

Yang continues to explain how he was disappointed by some of the material he saw in recent network upfront presentations. “Not to trash any particular network or show… the trailers felt like a lot of those shows were retrograded,” he says. “We just wanted to be honest with how we felt in our interactions with people.”

I witnessed part of this honesty when speaking with Yu, who openly admitted how relieved he feels being married in a current dating climate filled with so much struggle. Wait… only women are supposed to feel that way, right? HELL-to-the-no. “I absolutely [feel relived],” he says. “At least for men, I can’t speak for [women]; a huge chunk of your brain is constantly devoted to finding your mate.” Ha, and I thought it was just us girls. “When that chunk of your brain is utilizable for anything else, it’s like you’re a superhero,” the 37-year-old explains. “Suddenly you’re so much more productive in your life, you’re a happy person. It’s like you double your ramp.”

Yang drives the point home by explaining why so many men can relate to Ansari and his on-screen buddies. “The more specific you get, the more personal it is,” he says. “I think it might’ve been a Quentin Tarantino quote we took inspiration from: ‘If you’re not offending people in your real life, then you’re not writing,’” he says, explaining how male friends and family members influence the show’s writing. “I don't think we’ve gone that far yet because I don’t think we’ve painted anyone in a negative light. I’m sure there are friends of mine who have looked at the show and seen something that reminded them of them.”

But these guys shouldn’t be embarrassed if their curiosity is portrayed on screen. They should be proud. Hopefully, the show will continue to teach men that they should swing from trees and lift cars with their bare hands only because they want to, not because society tells them to. And yeah, playing in a toy store is always a good time — regardless of age or gender.