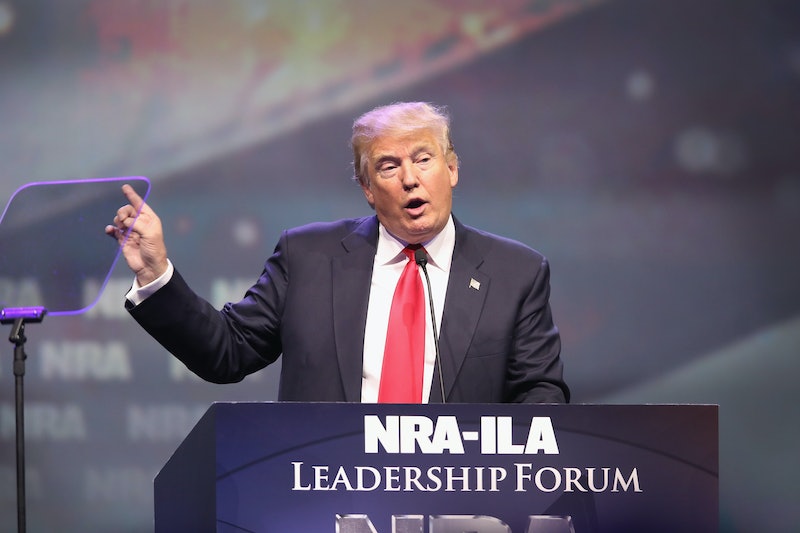 Donald Trump made a startling claim Friday night: Hillary Clinton will take away all of your guns. Trump used his endorsement from the National Rifle Association to attack Clinton, telling a crowd of fervent gun enthusiasts at the association's annual convention that a Clinton presidency would eradicate gun rights in America. “Crooked Hillary Clinton is the most anti-gun, anti-Second Amendment candidate ever to run for office,” the GOP presidential candidate said, solidifying his support from hardcore gun supporters and riling up his ever-present fan base.

Trump delivered a 30-minute speech at the NRA's leadership forum in Louisville, Kentucky, where he was deemed the "next president of the United States" by Wayne LaPierre, the organization's executive vice president. "To get the endorsement, believe me, is a fantastic honor," Trump said in his opening remarks. "I will not. Let. You. Down."

The speech was mainly attacks against Clinton and the Democratic Party. Trump mentioned Clinton barely a minute into his speech, revealing his new nickname for her: "Crooked Hillary." "Hillary Clinton wants to abolish the Second Amendment, just remember that," Trump said. "We're not going to let that happen. I can tell you that right now. We're going to preserve it. We're going to cherish it."

Trump is a member of the NRA, though he admitted at Friday night's leadership forum that he's not active in the organization or even a big shooter. In fall 2015, following the mass shooting at an Oregon college, Trump revealed that he has a license for concealed carry in the state of New York.

But Trump's trigger finger didn't really matter, because Friday's speech at the NRA annual convention was less about him and more about Clinton, who's being billed as an anti-gun tyrant who would make America, in Trump lingo, not great. For the record, Clinton has never said she would "abolish" or repeal full gun rights in America, and her current campaign plank promotes common-sense gun measures, including background checks and closing the loopholes in gun show sales. She also supports a ban on assault weapons.

Conveniently, Trump has also flip-flopped on some of these issues, having supported assault weapon bans and longer waiting periods for gun purchases in the past. According to On The Issues, Trump wrote in his 2000 book, The America We Deserve:

I generally oppose gun control, but I support the ban on assault weapons and I support a slightly longer waiting period to purchase a gun. With today’s Internet technology we should be able to tell within 72-hours if a potential gun owner has a record.

In an odd twist, Trump talked favorably of Vermont Sen. Bernie Sanders, who's still battling it out in the primaries. In an effort to perhaps exaggerate the divisions within the Democratic Party, Trump pitted Sanders against Clinton while agreeing with the progressive senator.

"Bernie Sanders ... he did say one thing that was very interesting," Trump said. "He said, 'Hillary Clinton is unqualified to be president of the United States.' ... He said she suffers from bad judgment, and she does."

Later, Trump rallied support for Sanders while also insinuating that the Democratic Party is rigging its primaries. "You talk about a rigged system — he wins every week and he keeps losing. I think Bernie should run as an independent, okay? Let him run."

And in yet another strange turn, Trump attempted to make gun rights a feminist issue, claiming American women would be safer under a Trump presidency. "Hillary Clinton is telling everyone — and every woman living in a dangerous community — that she doesn’t have the right to defend herself," Trump said. “So you have a woman living in a community, a rough community, a bad community — sorry, you can’t defend yourself."

Even though that rationale probably worked for his audience, the facts show that guns don't make women safer; it's the complete opposite. According to the Johns Hopkins Center for Gun Policy and Research, women are three times more likely to be killed in their home when there is a gun in the residence. Additionally, women who were killed by a spouse, intimate partner, or close relative were seven times more likely to live in a home with one or more guns.

A report released from the Violence Policy Center in 2015 provided a number of startling conclusions, including the fact that guns are the most common weapons used in female intimate partner homicides. The center also cited studies that found that women who were victims of gun-related homicide were more likely to be handgun owners, having purchased the firearm within three years of their death.