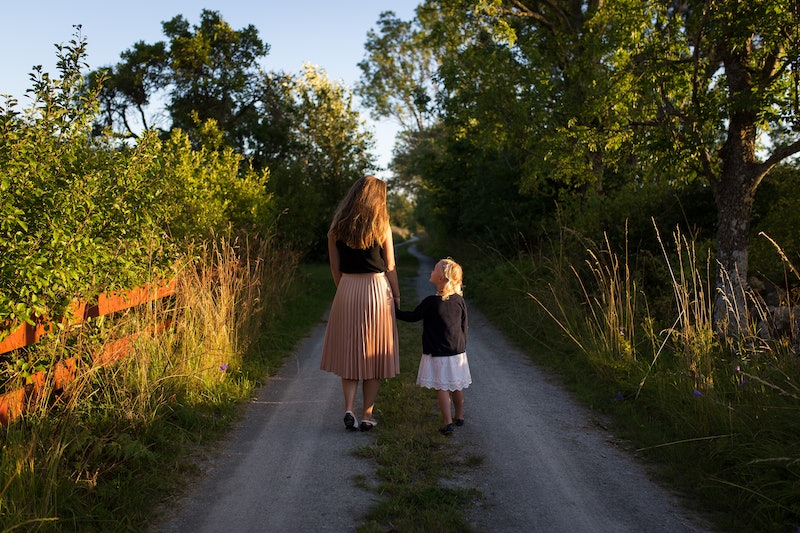 One of the things that makes gender norms so pervasive is the fact that we start learning them so early — and a lot of that comes from our parents. There's actually a lot of evidence that many of the things we think of as "innately" male or female are actually due to conditioning from our parents. Researchers in 1997 wrote that "the strongest influence on gender role development seems to occur within the family setting, with parents passing on, both overtly and covertly, their own beliefs about gender." And in the nearly two decades since then, the results have remained pretty much consistent.

In other words, gender roles are not just part of our relationship with our parents, they're intrinsically tied up in our relationships with our parents. And that can make things...uncomfortable at times. Because gender roles are, by their very nature, restrictive. And while some people are more at ease with their assigned roles than others, no one fits perfectly within society's defined gender norms all of the time.

So here are 6 ways that gender roles can damage your relationship with your parents. Hopefully recognizing those patterns can make it easier to deal with them.

Unlearning Gender Roles Can Mean Going Against Your Parents

Like I said, a lot of the things you know about gender roles are things that your parents taught you, in one form or another. Even parents who are more enlightened than average still are products of a deeply patriarchal society and have passed on at least some of that to you, whether they wanted to or not. So now that you're growing up and trying to unlearn whatever restrictive ideas about gender you've internalized, that can mean going against potentially a lot of things your parents might have taught you. Which can be upsetting for parents, and can even make you feel guilty sometimes.

Parts Of Your Childhood Were Sexist

Whether parents mean to or not, they not only send you a lot of sexist messaging, they also engage in sexist behavior, some obvious some not. For instance, studies have found that parents pay female children less in allowance, and that's just one of many random ways in which sexism creeps into your life. Parents also often discourage girls away from more "boyish" activities like sports. Parents automatically take girls to see princess movies but not to see super hero films. Parents often won't let their boys play with princess toys at all. Parents expect their children to dress in gender-conforming clothes. The list goes on — and on, and on.

Parents usually think that teaching children these norms and expectations is good for them — if they don't just think of it as perfectly natural. But looking back on it as an adult can seriously piss you off. After all, as a kid you didn't really know enough to understand how unfair it all was — or maybe even to notice the unfair things as they were happening. But now that you do, it's time to get freshly upset.

Expectations About Your Career

Your parents might want what's best for you, but sometimes their understanding of "what's best" is colored by their understanding of gender norms. Maybe they don't think you should be so focused on your career. Maybe they don't approve of your career choice because it just doesn't seem like something women do. Maybe you can just sort of tell that they just don't expect as much from you because you're a woman. Regardless of how it manifests, it can be frustrating, and put a real wrench in your relationship

Expectations About Your Love Life

Whether you're with someone for years without getting married, dating someone of the same gender, not getting serious with anyone, or not even dating at all, parents can sometimes be less than supportive of your love life. Society sends a lot of clear messages about how women especially are supposed to find someone of the opposite sex, settle down, and have kids. As far as gender norms go, it's so pervasive it's almost impossible not to internalize it to some degree or other. So if you're not doing that — especially if you don't even want to do that — it can be hard for parents to understand. Which in turn puts a strain on your relationship with them.

Dads Aren't "Supposed" To Be Emotional

Society has some pretty messed up ideas about women, but social constructs surrounding masculinity are sometimes just as twisted. Gender norms dictate that women are the kind, nurturing, emotionally supportive ones, and that men are...well, not. And then there are also plenty of stereotypes about dads being hopeless as parents, and the idealized vision of the "kindly but distant father" who doesn't really spend much time with his children. All of it adds up to fathers not really wanting to be too emotional or even involved with their kids, either because they think that's how they're supposed to be or because they don't think they'd be any good at it. Either way, it can make it hard to have a relationship with any male parental figures in your life.

And Parents Aren't The Only Ones With Expectations

We've made a lot of strides in deconstructing gender norms in the past generation, which means that you probably have absorbed fewer of them than your parents, or at least have a head start on getting over them. But that doesn't mean you haven't internalized plenty as well. You might expect your mom (or moms) to be more emotionally available and nurturing than comes naturally. You might expect your dad (or dads) to be more stoic and strong than they are. In reality your parents are just people, and they shouldn't have to conform to gender norms easier, even if on some level you expect them to.